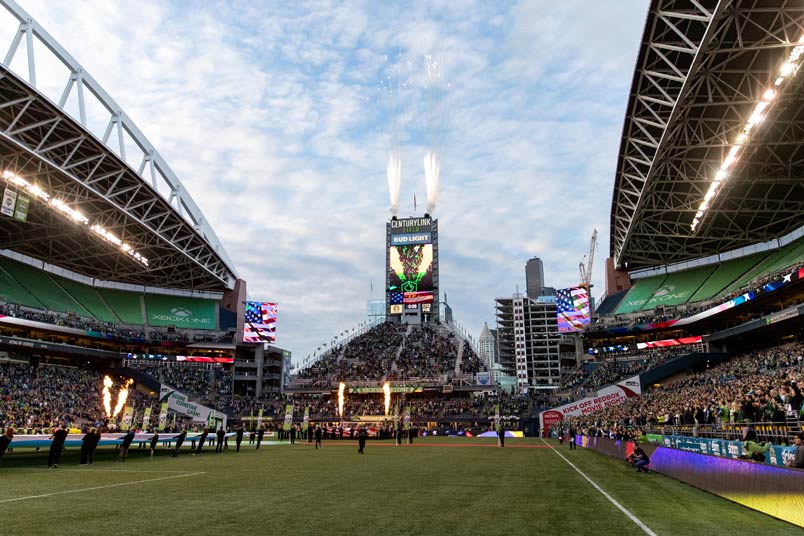 By Jason Davis – WASHINGTON DC (Jun 29, 2018) US Soccer Players – The story at the start of Week 18 of the MLS season are teams going opposite directions in rivalry games. Namely, the two games on Saturday’s schedule. Should viewers stick around after Fox’s World Cup coverage, they’ll see the Seattle Sounders vs Portland Timbers derby. A few hours later, ESPN has Atlanta United hosting Orlando City.

Both of these games were easy picks for national availability. Before the season, they highlight exactly what the league wants to sell. Now? Let’s politely say that it’s complicated.

With half the season gone, the confidence in rivalry games is also in question at least for these two examples. Seattle hasn’t begun to recover and shape into anything other than a struggling team. Orlando City is in the same category in the Eastern Conference.

Seattle is welcoming a new designated player in Raul Ruidiaz, but will wait for his on-field impact. Orlando City has a new coach, making a deal with USL club Louisville FC for James O’Connor but his debut will wait.

So back to those rivalries. Any meeting of the Sounders and Timbers is the bedrock upon which MLS built its contemporary marketing scheme. The passion present in the Cascadia Derby remains unique in American soccer. No matter where the two teams sit in the table, the fans of both care desperately about prevailing over the other.

Still, this version of the Cascadia contretemps arrives with only the Timbers looking like a playoff contender in 2018. Despite their status as the defending Western Conference champions, the Sounders are lurching through this season like a limbless version of itself. Head coach Brad Schmetzer gets some of the blame for the poor results, though it’s hard to place the blame fully at his feet with the club’s injuries.

The Sounders needed a Clint Dempsey goal, his first of the season, to salvage a point against the Fire at CenturyLink Field last weekend. That’s two points dropped anyway it’s sliced, with Dempsey getting on the scoresheet something of a silver lining for the goal-starved Sounders. They’ll need better to beat the Timbers. The pressure is mounting for Seattle. The math doesn’t favor them getting into the playoffs unless they can take maximum points at home for the balance of the season.

Pressure on Ruidiaz then, arriving from World Cup duty with Peru and as Liga MX’s leading scorer. As excited as the signing is, Ruidiaz won’t be available until the secondary transfer window opens on July 10.

For Saturday, the Sounders might be without their starting keeper, Stefan Frei. The club disclosed that Frei is currently in the League’s concussion protocol, though it’s unclear if that means he does, in fact, have a concussion or will miss the match against Portland. Bryan Meredith would start if Frei is unavailable.

While Seattle struggled to get a toehold on their season, the Timbers are humming along at an encouraging rate. They took a point in the hostile environs of Mercedes-Benz Stadium against Atlanta United. The Timbers have a nine-game unbeaten run going, with three-straight draws following six-straight victories. First-year head coach Giovanni Savarese has proven pragmatic, but flexible, in his personnel choices and tactics.

The Timbers are sitting in 5th-place in the Western Conference, tied on points with Real Salt Lake but behind on the first tiebreak. As always with MLS, pay attention to games played. Portland has played two fewer games than RSL.

Savarese rolled out a five-man backline against Atlanta, the better to absorb United pressure and hit them on the counter-attack. It should be a similar approach against the Sounders. Portland will likely move back to a four-man backline, possibly with a trio of defensive midfielders as a shield. On the road, the Timbers will be happy to keep the Sounders in front of them and leak out Diego Valeri and company for chances on the break. Samuel Armenteros should start at forward, with Valeri and Sebastian Blanco behind him.

Orlando City can match Seattle for desperation. Unlike Seattle, the Lions will be on the road and will have a tougher task securing three points. Saturday’s match will be the second in charge for interim head coach Bobby Murphy, the man who took over for Jason Kreis when Orlando City fired Kreis two weeks ago. Orlando is on a seven-game losing streak. The latest loss was a depressing 2-0 home defeat at the hands of the Montreal Impact last Saturday.

Murphy has shifted Orlando to a 3-4-3 since taking the helm, a system that helped them earn an Open Cup win but fell flat against Montreal. Putting three center-backs on the field is a nod to giving goalkeeper Joe Bendik an extra shield closer to goal. However, it also creates a lot of heavy lifting for holding midfielder Oriol Rosell and allows opponents to exploit spaces out wide.

The flip side is two forwards playing in support of the center forward, cutting inside and using the channels to pick up the ball or draw defenders away from the striker. In Orlando’s case, that means Justin Meram and Josue Colman slashing in and out of the box to find shots, make back posts runs, and slip in passes to Dom Dwyer.

Atlanta United won’t be too bothered with counteracting Orlando’s system. Tata Martino’s team sits on top of the combined table and enters on a five-game unbeaten run. Last week’s draw with Portland was something of a disappointed because of the number of chances United failed to convert. Regardless, there’s plenty of confidence with the Supporters’ Shield leaders.

If there’s one major concern for Atlanta, it’s replacing midfielder Darlington Nagbe in the lineup for this match. Nagbe suffered a right adductor injury in the second half against the Timbers and will miss 2-3 months. Martino said he could turn to Kevin Kratz or Julian Gressel to fill Nagbe’s role. Kratz is a like-for-like switch. Gressel would move inside from his current wing position. Hector Villalba also figures to play a role in the midfield construction.

Regardless of Nagbe’s absence, expect Atlanta to control the ball and the tempo of the match on Saturday. Orlando will work to pressure United into mistakes, particularly with the three-man forward line. The Lions must be careful with the numbers in midfield likely favoring Atlanta. The last thing Murphy and his team want to allow Atlanta to do is break out of the midfield with space in front of the backline and Rossel forced to play lone defender against Almiron and company.