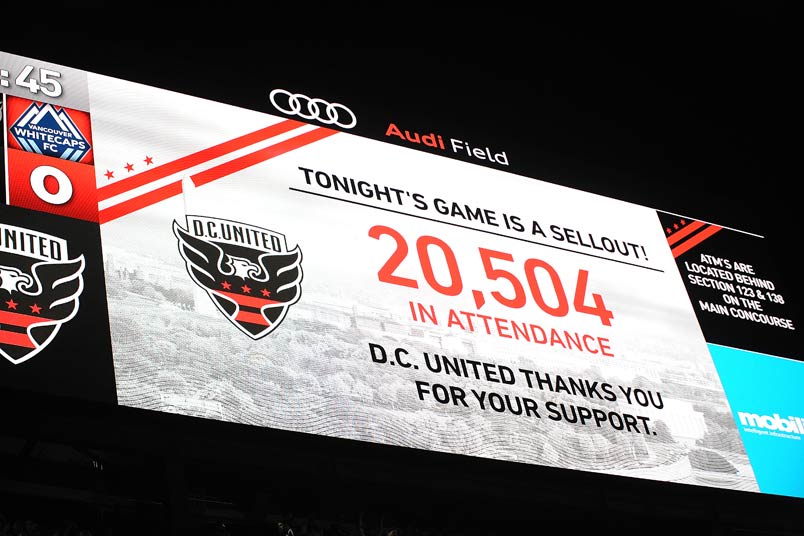 By Charles Boehm – WASHINGTON, DC (Jul 19, 2018) US Soccer Players – It was a pleasant Saturday night by DC summer standards, with relatively mild temperatures and low humidity. The home team was debuting their pricey, richly-anticipated new stadium. The buzz around it compounded by a marquee global superstar, Wayne Rooney, making his first appearance in town. It was an occasion many of the area’s soccer fans had been waiting years, in some cases decades, to experience.

On paper, the inaugural match at Audi Field was easily the biggest soccer event of the year in the nation’s capital. And on paper, it was officially marked as a sellout. In fact, it was an overcapacity crowd of 20,504 with standing-room-only seats sold on the day of the game. Yet, a noticeable number of seats, many of them colored “raccoon fur gray” in the club’s tongue-in-cheek tribute to the wildlife at its former home, RFK Stadium sat empty for the entire match, an enjoyable 3-1 defeat of the Vancouver Whitecaps.

You could chalk up some of that to problems with the new paperless ticketing system, wherein United demand that all fans use smartphones to present digital tickets at the gate. With the facility’s wifi acting up and neighborhood mobile-phone networks overloaded by the crowds, more than a few fans were unable to pull up their tickets for scanning. Some, most prominently The Undefeated columnist and DC native Clinton Yates, gave up on attending the game altogether.

Others got in, but encountered massive lines for food and drinks, offerings “curated” by celebrity chef Jose Andres and heavily promoted by the club. So that might’ve led to some empty spots. It’s also possible that fans sitting in Audi Field’s luxury sections were in the house but preferred to spend most of their time in “premium” areas away from the pitch.

One is the Eagle Bank Club, a lounge and patio area where you can look out at the nearby Anacostia River or Nationals Park instead of actually watching the soccer game you’re at. Access to that costs as little as $175 a game, the price of a club seat in the venue’s prime sideline sections. The Black-and-Red stand to reap upwards of $10 million a year in rent from luxury suites and club seats alone.

In a striking contrast to the rootsy old days at RFK, DC has focused most of their time and energy on catering to the richest segments of their fanbase. The opening-day atmosphere reflected it. An ongoing feud between the club and two of their three supporters’ groups certainly did not help either.

Factoring for all that, Saturday didn’t appear to be a true sellout at least in the number of people who made it through the gates. In that regard, Audi Field’s debut reflected a wider trend across American sports. Declining attendance at the events themselves, even as the rights to broadcast those events continue to grow more and more expensive.

As Will Leitch reported last week in New York magazine, Major League Baseball encountered a 10 percent drop in attendance over the first two months of the current season compared to the same period of 2017. Last year’s overall numbers were down too, and for the sixth consecutive season. Comparable patterns also show for the NFL and NHL.

It’s a similar picture in major college sports. Last year the biggest NCAA football programs experienced its largest per-game attendance drop in more than three decades, a fourth straight season of decline. The phenomenon is even more drastic at smaller, non-powerhouse schools, many of whom find themselves deep in the red after years of hefty profits that helped bankroll the costs of their entire athletic departments.

There are many factors. Ticket and concessions prices have generally skyrocketed over the past decade or two. Meanwhile, hi-definition televisions and in-depth media coverage have made it easier to watch and enjoy games at home. Generational shifts are underway, too, with millennials consuming and interacting with sports in significantly different ways than their elders.

What might be most striking is that “owners and commissioners aren’t sweating it too much,” in Leitch’s words. They make the lion’s share of their profits elsewhere.

“Teams and leagues will still happily take your money for a ticket, don’t worry – but you’re actually just as valuable for them, maybe even more so, as a subscriber to their internet package or even just a basic cable subscriber to ESPN or their in-house network,” writes Leitch. “They don’t need you to show up at the game to get in your pocket.”

We don’t know yet what will be the norm at Audi Field. Tickets for the inaugural game cost double or more what they’ll normally cost. So the attendance dynamics will be different going forward. United will probably iron out most of the opening-day kinks. Perhaps Rooney will fire up the market by spurring a playoff push.

Still, there’s a larger issue to contemplate here. MLS, NWSL, the US national teams, and other professional soccer products in this country depend heavily on gameday revenues. Though television income has improved in recent years, wider shifts in viewing habits could easily undermine those gains. Aside from tentpole events like the World Cup and Copa America Centenario, this sport has hardly ever approached the stratospheric TV ratings and revenue here that the NFL, MLB, and NBA enjoy.

In response to those hard realities, the unique sensory experience of soccer in the flesh has long been the sport’s differentiating factor. The passion and noise of supporters’ songs and chants, the crowd’s ability to will its team to greater heights, the flowing nature of the game itself. All make it a more compelling spectacle in person. Add to that a soccer game clocking in at a predictable two hours. So any sort of dwindling in the value of that gameday experience should give us pause.

A vicious cycle lurks here, too, one that dogged MLS in its early years. If too few fans make it to the stadium, or they don’t create the vibrant ambiance around the game, then the value of the game as a viewing product diminishes both on site and on TV. That, in turn, makes it a less appealing spectacle to attend.

This is why DC should be more concerned about their inability to transfer the fervent RFK vibe of old to Audi Field. Those spectators in the stadium aren’t just consumers. They’re part of the product shopped to TV viewers, sponsors, and even players, particularly those from soccer-mad nations who might be mulling a move to the States.

Audi Field is probably not an outlier one way or the other in MLS terms. LAFC’s luxurious Banc of California Stadium opened earlier this year. While its euphoric first game was at or close to capacity, subsequent games have featured swaths of empty seats. That’s one thing they have in common with their crosstown rivals the LA Galaxy.

We may have to grant some leeway for the industry practice of using “tickets distributed” to calculate attendance totals rather than “turnstile” counts or actual butts in seats. MLS is well-known for taking major liberties with its numbers. Anyone who ever watched a Chivas USA game can testify to that. At the other end of the spectrum sit Atlanta United and the Seattle Sounders, true box-office successes who’ve figured out how to fill an NFL stadium for Major League Soccer.

Two of the league’s other hotbeds provide controls of a sort. In Portland and Kansas City, sellouts are the norm rather than the exception, with limited capacity and authentically high demand making it rare for seats to go to waste. That seems to offer a truer picture of how many people want to get a taste of the product, and how badly.

Maybe someday American soccer will have the luxury of not worrying about empty seats, paid for or not. League-wide, those days are yet to come.