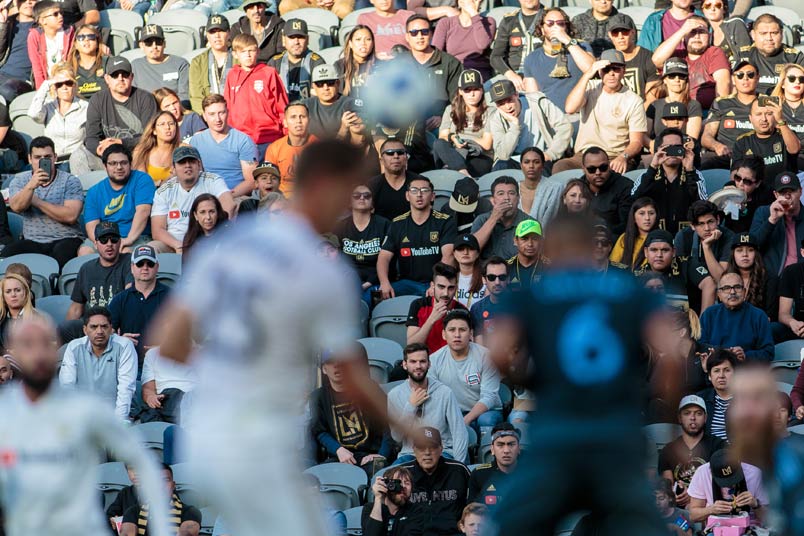 By Luis Bueno – RIVERSIDE, CA (Jul 25, 2018) US Soccer Players – Even though the club is very much in its infancy, LAFC has already played some very important matches. The club’s first-ever game on March 4 at Seattle was one. So was the first game against the LA Galaxy, on March 31. Banc of California Stadium’s christening was important as well, as the April 29 tilt against Seattle ushered in the latest in a string of new stadiums around MLS.

No match the team has played or will play during the course of this regular season, though, will be as important as the next one. While it comes in the middle of the season, on a weeknight no less, a bad result Thursday could set LAFC back. That’s not been their expansion story so far.

The Galaxy beat LAFC 4-3 in the clubs’ first-ever meeting. A loss Thursday would give the season series to the Galaxy no matter what happens in the final regular season meeting, slated for August 24 back at StubHub Center.

Should LAFC lose, The Battle of Los Angeles, the so-called El Trafico, would not have been a battle at all. Not even a skirmish. The Galaxy would have swatted LAFC aside, making a major statement about priority.

Perhaps that is the way it should be. This is the Galaxy’s town after all. As the club’s marketing campaign has trumpeted, the Galaxy has been around since 1996. During that time, the Galaxy has won the most titles in the league, been home to numerous high-profile players, and set a bar that teams across the league struggle to reach much less get over.

No matter the method or how much money the club spent, LAFC was never going to match that soon, let alone a half-season. LAFC though has been impressive in its own brief existence. The club did what many thought was unlikely. They built in the heart of Los Angeles. LAFC found space where the was none and constructed one of the league’s most beautiful stadiums. They also built a high-priced and highly talented roster, and it’s producing results.

LAFC has scored 42 goals, second only to Atlanta this season. Through 20 games, LAFC sits at 10-5-5, its 35 points good for second place in the Western Conference. Barring a total collapse, LAFC will become just the third expansion team over the last decade-plus to reach the playoffs in its first year of existence.

Locally, more than filling the seats and success in the standings, LAFC needs to beat the Galaxy. If LAFC does not want to become the MLS version of the LA Clippers, if LAFC truly wants to make this its town, then a win against the Galaxy is mandatory.

The Lakers-Clippers rivalry is the best local rivalry amongst professional sports teams in Southern California mostly because the two share a building. The Dodgers-Angels and Kings-Ducks rivalries are solid but distance separates the franchises in both sports. The Angels and Ducks play home games in Orange County as opposed to Los Angeles County. The Rams-Chargers rivalry is not a rivalry as an “Oh yeah, I forgot the Chargers moved to LA” is a common reaction for NFL fans. Perhaps that changes when both teams move into Los Angeles Stadium at Hollywood Park in 2020.

The Clippers have had a better go of it in the NBA over the last several years as the Lakers struggled. With the Lakers’ recent signing of LeBron James, the city became instantly revitalized. Lakers fans are talking playoffs while the Clippers are off the radar entirely.

It’s the Galaxy as the Lakers in this scenario. They need a reason to remind fans that they were the soccer team the region once cared about. The Galaxy’s struggles coming off of last season’s last-place finish haven’t helped.

Until the last month or so, the Galaxy was still meandering about, dazed and lifeless, destined to miss the postseason again. But the Galaxy has come out of it in a big way. The club is winning close games and blowing teams out, getting results, and climbing the table.

Just four points separate the Galaxy and LAFC. A win by the Galaxy nearly closes the gap. It could do more than that. It could disrupt the LAFC story, one that looked to overwhelm whatever the Galaxy did in 2018.

Not that long ago, it was Chivas USA trying to carve out interest in LA. They tried sharing the same stadium as the Galaxy, and never got over that secondary tenant status. The Galaxy caused problems for Chivas USA throughout that club’s entire existence.

Chivas failed to put away the Galaxy when the opportunity was there for the taking. Chivas had a stark makeover between the 2005 and 2006 seasons. The first Chivas-Galaxy meeting in 2006 looked like a potential passing of the torch. Despite winning MLS Cup 05, the Galaxy looked weak heading into the 2006 season. Chivas dominated the Galaxy in that first meeting in 06, apparently ready to erase the five losses Chivas suffered against the Galaxy the year before.

Trailing 1-0 late in the game, though, the Galaxy turned the score around and won by 2-1 when all had appeared lost. Even though Chivas won the next outing between the teams, that loss stuck. It gave the Galaxy hope and confidence that they had Chivas’ number no matter the situation. Chivas beat the Galaxy twice in 2007 but won just one other game during the clubs’ future outings. Had Chivas beaten the Galaxy in early 2006, it may have given the club the psychological edge or, at least, prevented the Galaxy from nabbing it.

So there we were earlier this season with LAFC up 3-0. forget about passing torches, LAFC looked like a team that was going to take everything then and there. The Galaxy stole a goal back and then another. Then, Zlatan Ibrahimovic scored a stunning strike to level the score before hitting for the game-winner in stoppage time.

LAFC cannot allow the Galaxy to land a knockout blow. A home loss would be disastrous because LAFC would not be able to atone for that until next year, unless the teams were to meet in the playoffs. Yes, the playoffs. Imagine a playoff meeting with the Galaxy after dropping regular season games away and home. The psychological edge would belong to the Galaxy, and likely the series too.

A win on Thursday and LAFC can continue forward with its remarkable inaugural season. A loss, and they’ve got something to worry about as the season moves into August.