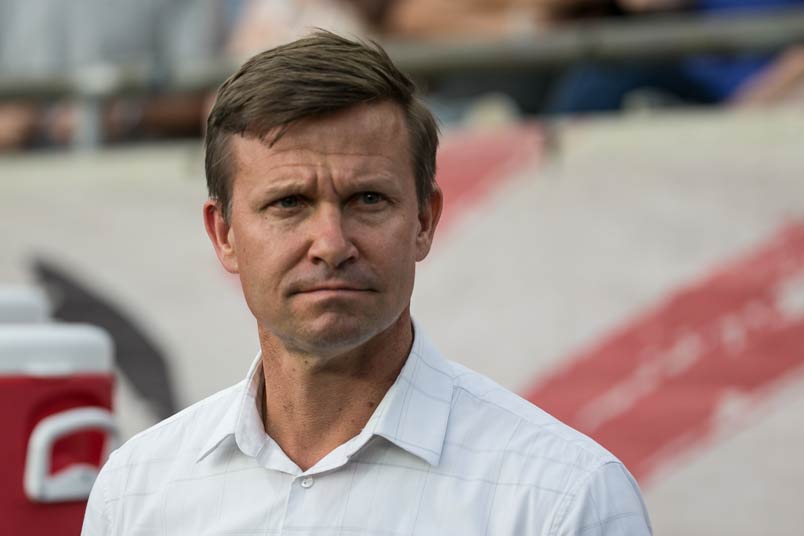 By Charles Boehm – WASHINGTON, DC (Jul 13, 2018) US Soccer Players – This week brought a news item that might once have dominated the American soccer conversation for days at a time. Jesse Marsch leaving the New York Red Bulls to take up a new challenge as an assistant to Ralf Rangnick at RB Leipzig, RBNY’s Bundesliga sibling club.

US coaches working abroad at high levels in the professional game are a relatively rare sight. Bob Bradley has been the most visible torchbearer, journeying overseas after parting company with the USMNT’s top job in 2011 and not returning until LAFC asked him to oversee their inception last year.

Gregg Berhalter and Tim Hankinson are among those with notable stints abroad. Ex-USMNTers Thomas Dooley and Steve Cherundolo have done substantial work in the trade, from Germany to the Philippines. Less-prominent names like Brian Clarhaut, Joe Enochs, and Mike Keeney are carving out careers far from home, too. However, in general, American coaches have roamed dramatically less than their player counterparts. This country has been a net importer in that trade, for a range of reasons.

So Marsch’s move is intriguing. Even more so because it’s one he seems to have been eyeing for some time. He’s willing to move sideways or even take a step down in order to make it happen. The former USMNT midfielder spent significant time learning German, visiting other Red Bull-operated clubs, and earning UEFA coaching badges over the past few years. He even left his assistants in charge of the Red Bulls in the leadup to one of their crosstown rivalry matches against NYCFC last year so he could attend a round of classes in Poland.

Notably, Marsch has accepted a less prestigious job title in order to start his European adventure. Some segment of the RBNY fanbase, like any club’s, will always rue their team’s coach leaving in midseason, especially one in which the Red Bulls look like real title contenders. Beyond that, though, some facets of March’s move do seem to have ruffled a few feathers Stateside.

“Coaches like Bob Bradley have gone to Europe. That was an inspiration for all American coaches,” Marsch told German outlet rblive.de. “I started to think about other possibilities. So I took my next step and obviously it was very valuable to get to know the people here. Even though in some people’s heads it’s an assistant and not a head coach, it was about personal development.”

Marsch’s move seems to have accelerated the chatter about USMNT midfield talent Tyler Adams moving across the Atlantic in like fashion. MLSsoccer.com’s Sam Stejskal reported this week that the RBNY Homegrown will join Leipzig in the near future, probably either via a winter transfer or a summer move paired with a loan back to New York to finish the MLS season.

Again, some will fret about such developments. Are Leipzig and their Red Bull global owners taking advantage of their RBNY relationship to remove a top player from MLS. Or are they just making an inevitable and welcome European move happen more efficiently? Is it “a step down” for an MLS head coach to become an assistant in the Bundesliga? More broadly, should we keep our best at home, or send them out into the world as emissaries?

Perspectives will vary. It appears to stoke an old argument over a certain element of the US soccer mentality that’s hard to pin down, yet quite influential. Just what is our place in the global soccer hierarchy?

Most would agree that humility is key when considering our modest achievements compared to the world’s elite. For decades the US has been widely perceived to be falling well short of maximizing its talent and resources. We’ve made big strides over the past three decades, only to see progress slow at loftier altitudes. For the foreseeable future, we can use all the imported expertise we can get, right?

Then again, American soccer’s longtime status as a “frontier” of the game both in need of and vulnerable to often patronizing foreign guidance risks marginalizing the sport’s rich history and unique context here. Leaders here have often attempted to import personalities or cut-and-paste blueprints from elsewhere in the hopes of making up ground, with highly mixed results.

The concept of America’s place in the world game might jibe with the usual layout of the FIFA World Rankings. For many Yanks, however, that idea is an affront to cherished ideas like upward mobility and personal improvement. This cloudy state of affairs has pretty clearly spawned an inferiority complex which continues to bedevil us.

“Our approach and our behavior to the sport here – to coaching, to everything, is just wrong,” USMNT great Claudio Reyna told reporters after the World Cup qualifying heartbreak last fall. “We’re far too arrogant. We’re far too obnoxious. We are egotistical having never won anything or done anything, and that’s not the case around the world. We have coaches who think they’re better than they are. Across the board, we just think we do things better than we really do. I mean in every way. Whether it’s broadcasting, or media, coaching, we’re just not as far along as we tell ourselves we are.

Reyna’s words were a sobering slap in the face to some. One of the best players in American soccer history, he spent ample time overseas and worked at several iconic European clubs. His current position as NYCFC’s sporting director requires him to have a foot on both sides of the Atlantic, liaising with its mothership at Manchester City while still navigating the quirks of MLS and our domestic landscape. I say all this to suggest that his viewpoint may be worth more consideration than most.

We speculate a great deal about the gap between US-reared players and their overseas counterparts. Many who work inside the game will make the case that the divide is actually larger and more costly in the coaching department. The fact that cases like Bradley’s are so rare, and that his path was so winding and grueling, is noteworthy here. Marsch seems to innately understand this state of affairs. It’s encouraging that he’s eager to try anyway.

“I think all of us as players, as people, as coaches, you’re trying to find ways as you move along to get better at what you do,” Marsch told Pro Soccer USA earlier this year. “The more that we get exposed to, and the more our eyes are open, to high-level football thinking and leadership and tactics, it can only lead to better things I think for football in our country.”

Americans, we are often told, don’t sit well with being second-best in any department. We prefer to be doers rather than observers. The sobering experiences of the past year should provide a prime opportunity for deeper reflection on what that should really mean.