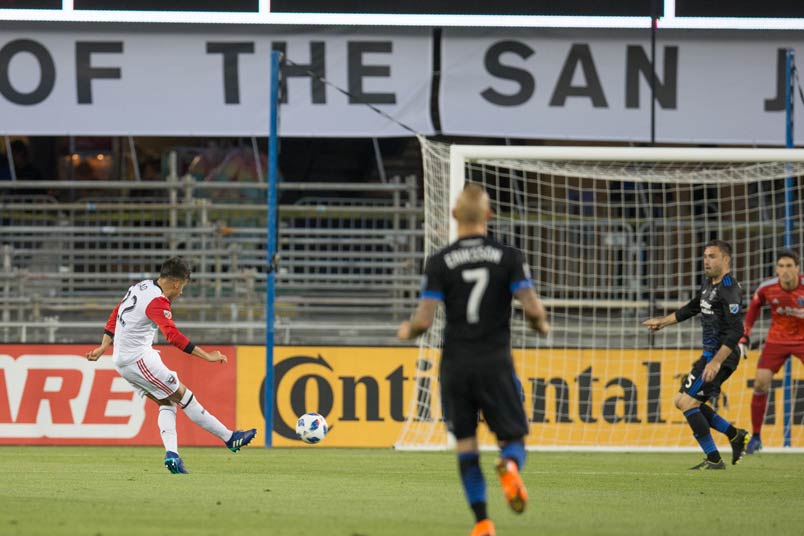 By Jason Davis – WASHINGTON DC (Jul 20, 2018) US Soccer Players – The hope of March and April has given way to the despair of a season almost already lost in July for several MLS teams. Plans laid down in the dawn of the campaign have already gone up in flames in places like San Jose, Colorado, and perhaps Toronto and Seattle. Given their lack of games and a back-loaded home schedule, DC United is still a question mark.

While the spotlight shines brightest on the clubs at the top of the table East and West, it’s just as interesting down at the bottom. That’s where we find teams that look like lost causes and those still hoping that there’s enough time left in the season to turn things around and make the playoffs.

There’s no more sordid tale of in-fighting and finger-pointing in MLS than what’s happening with San Jose. The Quakes attempted to remake themselves over the last two seasons, bringing in a general manager with a European pedigree, Jesse Fioranelli. Their head coach was on the rise out of Sweden, Mikael Stahre. It hasn’t been easy for either of them.

A host of signings executed by Fioranelli during his rebuild of the roster have failed to come good. That’s left the club without a competent defense. The Quakes are 20th in goals conceded in MLS. They’re also the only team in the league without a shutout on the season.

If the attack was a little better or the defense threw up the occasional great performance, San Jose might not be in last-place in the Western Conference. With the results not coming, a series of troubling public spats has threatened to destroy any chance of a revival.

Quakes defender/midfielder Florian Jungwirth has spoken out in the press on numerous occasions about the state of the team. He’s made it clear that the Quakes aren’t good enough to make the playoffs. While not directly calling out Fioranelli, Jungwirth’s comments certainly seem pointed in the direction of the architect of this roster.

Stahre hasn’t fared any better in his first MLS season. His struggles with player relationships got a very public airing in Montreal on Saturday. Stahre removed Anibal Godoy from a match against the Impact in the first-half, then removed his replacement, Fatai Alashe, before the second-half began. Though Stahre explained both decisions as down to injured and Fioranelli backed him up, fans are rightly concerned that the coach is doing more harm than good.

Team leader Chris Wondolowski tweeted his belief that the Quakes’ problems are the responsibility of the players, not of Stahre and the coaches. Fioranelli claims the support of the owner and a commitment to stay the course with his plan. Both of those will be issues with 15 games left to go for a team that has missed the playoffs five of the last six seasons.

Like the Quakes, the Rapids navigate 2018 with a new head coach at the helm. Following the dismissal of Pablo Mastroeni when dour soccer failed to deliver results, Padraig Smith and the Rapids’ decision-makers brought in 37-year old Anthony Hudson.

The American-born, English-raised Hudson was something of an interesting choice when Colorado enticed him away from the New Zealand national team. Despite a regular deficit of talent, Hudson managed to get some encouraging results with the Kiwis. Taking a flyer on a foreign coach hasn’t always worked in MLS. Still, Hudson possessed a few traits that suggested he might be able to make the transition.

It has not worked out. Whether it’s Hudson’s coaching or the roster constructed by Smith, the Rapids are failing at every metric. The defense is mostly passable, but that hardly matters when the attack can’t score goals. Only the Sounders have scored fewer times than the Rapids this season. Colorado’s goal difference sits at a dispiriting -10.

Troubling examples of poor roster management abound, but it was the recent decision to release Irish international forward Joe Mason and sign former Dynamo and Orlando City man Giles Barnes that stands out. The Rapids signed Mason on loan from Wolverhampton before the season on a $600,000 contract. While he didn’t burn up the league with his goalscoring exploits, the choice to swap Mason for Barnes makes little sense when looking at the numbers.

Just about a year ago, the Rapids ran an op-ed in the Denver Post written by Smith and Chief Business Officer Wayne Brant called “The Rapids Way.” The intent was to convey the philosophy behind the club’s plan to grow into an MLS Cup contender that valued attacking soccer and “financial intelligence.” With the team in 11th-place in the West and showing no signs of improvement, the Rapids Way appears to have led to nowhere but a dead end.

It’s deja vu in Seattle, where the Sounders are attempting to overcome a poor start to the season for the third consecutive year. Considering that the first two times the club not only made the playoffs but won the Western Conference and advanced to an MLS Cup final, there is still some reason for hope at CenturyLink Field.

However, the plan meant to prevent the need for such a turnaround deserves some scrutiny. The Sounders may not be among the league’s top spenders in the MLS 3.0 era, but resources exist to help mitigate the effect of a shortened offseason. This winter was not the first time Seattle dealt with a less-than-ideal recuperation period, so excuses are in limited supply.

Injuries played a major role in the Sounders’ problems during the first half of the season. GM Garth Lagerwey is only now addressing them with the opening of the secondary transfer window. Seattle added Peruvian striker Raul Ruidiaz to help with the goalscoring problems and may be on the hunt for more attacking options before the summer is up.

Maybe the most shocking failed plan is unfolding in Toronto, where the defending MLS Cup champions and Supporters’ Shield winners are limping through a horrific campaign. A laser focus on the Concacaf Champions League, including an early start to preseason training and a trip to Mexico to prepare, helped push the Reds into the final of that competition. We now know that it also undermined efforts to repeat last year’s MLS success.

Sebastian Giovinco hasn’t been nearly as good in 2018 as in previous years. Jozy Altidore’s absence as he recovers from foot surgery has hurt the club immensely in the attack. At one point in the season, Toronto literally had no healthy center backs, forcing Michael Bradley to play on the back line.

Toronto’s vaunted depth, which is still remarkable by MLS standards despite the poor record, has not been enough so far in 2018.

GM Tim Bezbatchenko doesn’t have an easy task if he wants to make substantive changes to the roster this summer in a bid to make a playoff run. The salary budget is tight. It might require moving more than a few players to make room for fresh blood. Bezbatchenko already made one such move by sending winter signing Ager Aketxe to Cadiz on loan for the remainder of the season.