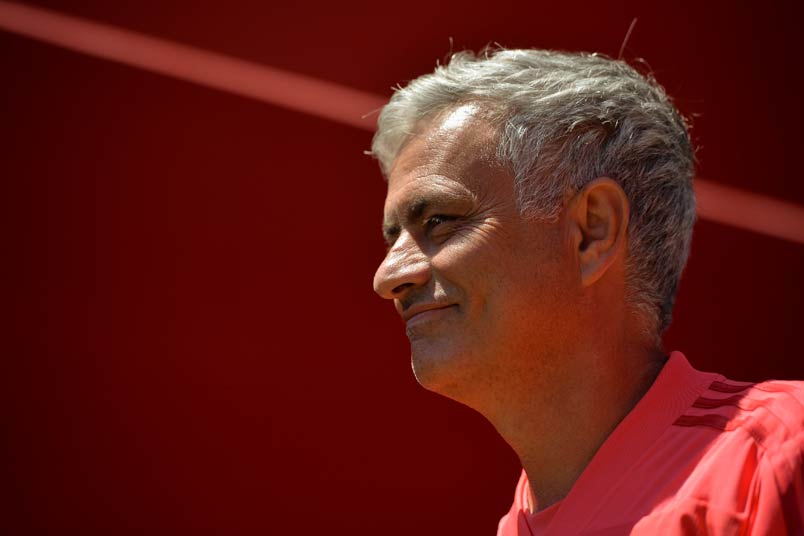 By J Hutcherson (Jul 24, 2018) US Soccer Players – Credit Manchester United manager Jose Mourinho for getting out in front of potential issues. With his team on tour in the United States and eventually welcoming back World Cup winner and star player Paul Pogba, the expectations for this season are high. That hasn’t meant good news for United in years, with the club struggling in a way that normally only applies to Europe’s elite.

Manchester United finished in 2nd-place in the Premier League last season, 19 points behind Manchester City. United won nothing in 2017-18, starting the season with a Super Cup loss to Real Madrid. They exited the Champions League at the round of 16 and lost the FA Cup final to Chelsea. Trying to claw a version of success from 2nd-place in the Premier League and runners-up in the FA Cup might work for other teams. It might even work for United had it not been City ahead of them.

So now, United spends the preseason trying to make sure that their objectives are clear. They’re a Champions League team, waiting for the group stage draw while preparing for a Premier League season where they’re a contender. The US tour is about youth players and depth, so nobody is sweating draws with Club America and the San Jose Earthquakes. The real work waits for the return of the full first team. That means Paul Pogba back in a Manchester United shirt.

“To win the World Cup can only be a positive thing,” Mourinho told his club’s official site. “So many players never had the chance to be a world champion, because their country was not strong enough or because they couldn’t help that team enough to make it happen. For Paul, to be world champion can only be fantastic.”

It’s a nice sentiment, even with the Mourinho – Pogba dynamic hanging over Manchester United during parts of last season. That came into play with another interview Mourinho gave during the US tour, to ESPN’s Mark Ogden. There, Mourinho said, “I don’t think it’s about us getting the best out of him. It’s about him giving the best he has to give. I think the World Cup is the perfect habitat for a player like him to give the best. Why? Because it’s closed for a month, where he can only think about football.”

Good of Mourinho to go ahead and answer the obvious follow-up question, even if it’s the type of response we’ve come to expect. The expectation is Mourinho knows what he’s doing. If he decides pushing Pogba with his public comments has a chance at making United better, he’ll take that calculated risk. Meanwhile, Pogba himself is on vacation after leading his team to the World Cup title and showing he’s got his own motivational methods.

A video of France in the locker room surrounding a table while Pogba addressed them made the rounds for good reason. He’s leading the team, focusing them and making sure they see the bigger picture. “Boys, I don’t want to talk too much,” Pogba begins before saying exactly what a team on the brink of a trophy needed to hear. The key moment comes when he makes the choice to remind his teammates that they lost the Euro 2016 final. “Today, we are not going to let another team take what is ours.”

Drawing a line between that, what Mourinho described as an enclosed short-run tournament, and what Pogba can do over the course of a season got a lot harder. Last season’s criticisms of Pogba resonated until he turned into the player France needed in the moment. He changed the narrative and the expectations, and he did it on the biggest stage in sports.

Advantage Pogba, but that’s not the point. Pogba’s return to Manchester United meant leaving a Juventus team that was good enough to lose Champions League finals. Now, that Juventus team is the new home of Cristiano Ronaldo. Real Madrid is in transition. Mourinho has already spent a reported $61m to add Fred to a crowded midfield and send a message to Manchester City. Fred was part of the Shakhtar Donetsk squad that knocked them out of the Champions League. This is the game at its loftiest level.

For Mourinho, Pogba, and Manchester United it’s more than just finding a balance to keep the team from holding itself back. It’s figuring out how to channel motivation and take advantage of opportunities in a way that separates them at home and in Europe. Easily said, but that’s where a team finds the way to put 100 points at the top of the Premier League table or get into a Champions League final as a decided underdog. It’s control of narrative as much as anything else. Manchester City won the Premier League and the League Cup. They didn’t get out of the quarterfinals in the Champions League, losing to 4th-place Premier League finisher Liverpool. Both teams ended up telling a story that took something away from the other.

It’s those scenarios that can make a 2nd-place finish feel like a disappointment. How a team turns that into motivation might be the manager’s job, but in a squad full of stars it can take more than that. It can take a player like Paul Pogba deciding to not talk too much and managing to say all the right things.