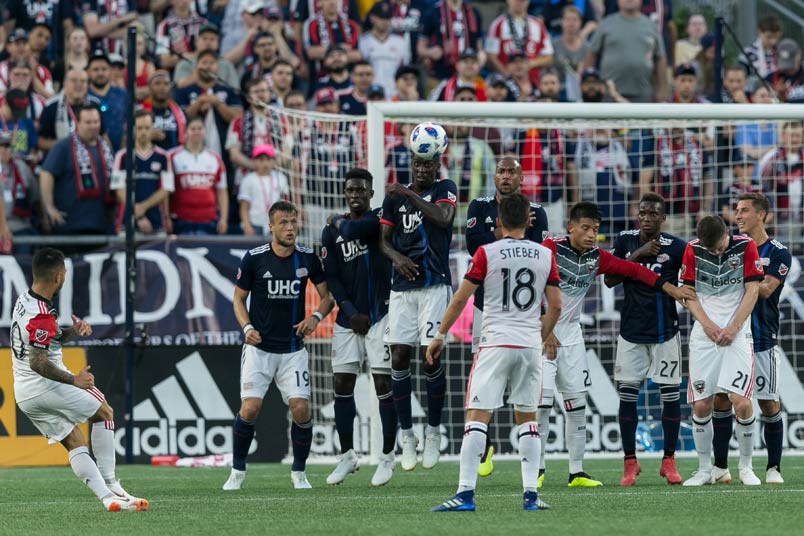 By Luis Bueno – RIVERSIDE, CA (Jul 5, 2018) US Soccer Players - Summer is well underway. In MLS, that means teams can still overcome early-season misgivings, but only by sorting out their issues now. Seattle reached MLS Cup the last two years despite carrying a poor record into July. The Sounders were 5-7-6 through June 2017 and 5-9-1 through June 2016 and yet both times were able to turn things around, make a late-season push and make a run at MLS Cup.

For some teams, there seems to be no sense of urgency. A poor spring seems destined to become a poor summer. For others, there are signs of life.

A bad slip-up to start July, but Atlanta did well in June piling up 11 of a possible 15 points. Josef Martinez continues to fill the nets with an astounding 17 goals, one more than the entire Seattle Sounders squad has scored this year. We are willing to overlook one poor two-minute stretch in the heart of Texas, for now.

New York proved its worth with a gritty 3-0 win over FC Dallas in late June. Up 1-0, New York went down to 10-men but still controlled the game and won in convincing manner. New York has a tough July with games against NYCFC, Sporting KC, and Columbus coming up.

FC Dallas is still very much a volatile commodity. The club can play like it did in New York or can also turn a late 2-1 deficit into a 3-2 win against the league’s best team. Mauro Diaz’s move to Dubai would be a dagger for many MLS teams, but Dallas figures to continue scoring goals and creating chances without him.

The Timbers turned a six-game winning streak into a three-game streak of draws until beating rivals Seattle 3-2 at CenturyLink Field to close out June. The team has done well to build a winning mentality. While Seattle is having a rough go of it this year, a win like that is proof of a strong mindset.

LAFC really does not like Texas. June kicked off with a 2-1 loss at FC Dallas, and July started off with a disastrous 2-2 draw at Houston that saw LAFC give up goals in the fourth and sixth minute of second-half stoppage time. But LAFC has had a strong showing this summer. Adama Diomande had the team’s first-ever hat trick last month. With Carlos Vela set to return soon, the offense should continue rolling.

Losing a manager midstream is difficult for any team but particularly a successful one. Patrick Vieira did well to get NYCFC competitive but did them a disservice by leaving in July. Newcomer Domenec Torrent has impressive credentials but his MLS education will take time, and the team is already showing signs of a difficult transition.

The top spot came and went for Columbus. The bottom did not fall out completely last month as the Crew went 1-2-2 in June but the team did not do well against the league’s upper crust, losing to Atlanta and LAFC by 2-0 each. The test in July will be how the Crew handles the road as three of the four will be away from home.

The defense is not the best, but New England still is pulling out points from their matches. Cristian Penilla has three goals in the last two games and eight overall while Teal Bunbury continues his stellar year with a career-high 10 goals. The defense will need to improve before the team can climb both the Eastern Conference table and these rankings but as long as the Revs can find the back of the net the team will continue to compete.

Houston did not have an overly impressive run in June, with one win from three games, but the stoppage-time comeback against LAFC revealed a pulse. Still, Houston needs to sort out its defensive issues. Houston allowed nine goals in May and five in its last two outings and the team cannot compete that way. Four of the club’s six July games are at home. The time to secure a playoff spot or bow out is now.

Chicago looks poised for a run. The Fire had a 3-0-2 mark in June and looks like a bona fide playoff team. Aleksander Katai has scored in three consecutive matches and six of his eight goals have come in the last seven games. If Nemanja Nikolic can get back to last year’s torrid pace the Fire will be difficult to control.

The Galaxy made a modest climb up the rankings by not losing. The Galaxy has not lost since May 30, but the team has not impressed much since then. Sure, a 3-0 win over RSL on June 9 was solid but the team has led by 3-1 and 2-0 in the last two showings and came away with just two combined points. Zlatan Ibrahimovic now has 10 goals. That's not the problem for LA. The issue is the backline.

RSL is level with Portland in the Western Conference table but RSL’s play is not on par with the Timbers or any of the three clubs ahead of the RSL in the standings. Somehow RSL has turned a -9 goal differential and a 1-7-1 road record into fourth place. Outside of an FC Dallas visit on July 7, RSL has a favorable schedule the rest of this month. If the team can do something positive on the road, the club could climb up these rankings a month from now.

Four wins in five games is a stellar month for any MLS club, but for Montreal it is remarkable. Montreal had sunk to the bottom of the rankings with a 1-8-0 effort over the previous two months, but the club decided to start playing soccer once more. More impressive than the wins is that all of them were shutouts. Two of the wins did come against Orlando City. However, the 2-0 win over Sporting KC to close out June showed just how far this team has come along.

The Whitecaps had two solid wins to start off June but the World Cup break hurt the team. Vancouver came out of the break with a 4-0 loss to Philadelphia and opened July with a poor 1-0 loss to Colorado. Still, the Whitecaps are in solid footing in the Western Conference table. Someone needs to take charge on the attack. Kei Kamara and Cristian Techera tiw for the team lead with six goals, but neither is very consistent.

Any progress Philadelphia made in its 4-0 win over Vancouver on June 23 slipped away with a 4-1 loss at LAFC on June 30. Philadelphia has struggled with consistency all season. A visit from Atlanta to start off July does not bode well but Philadelphia’s ability to pick up points against the rest of the opponents this month - Chicago, Galaxy, Houston - will determine if the team can compete for a playoff spot or not.

Wayne Rooney will get the headlines, but scoring goals has not been an issue for DC United this season. DC does not suffocate opponents with its attack. They've only gone 90 minutes without a goal once this season. The defense though has allowed 11 goals in the last four games. Still, with Rooney aboard and the club set to open the Audi Field this month, the stars seem to be aligning for this once-mighty franchise.

The shell that is Toronto FC continues to slide down these rankings and the Eastern Conference table. Toronto FC already has double-digit losses, just one of five clubs to have reached that ignominious mark. None of the other teams are surprising in reaching that figure, but Toronto FC is. Perhaps the club set too high of a bar the last two seasons, but if the team has any hopes to return to postseason play the time to act is now.

Raul Ruidiaz is the new Nicolas Lodeiro. At least, that’s what Seattle supporters are telling themselves. The club is hopeful its new acquisition will turn the Sounders around this season the way Lodeiro did when he arrived midway through the 2016 season. Fresh off the World Cup with Peru, Ruidiaz is a legitimate goal scorer and gives the Sounders a threat they have not had with Jordan Morris sidelined.

Minnesota lost all three of its games in June but opened this month up with a 4-3 win over Toronto FC. Darwin Quintero scored three of those goals, a sign that he may be figuring out this league and how to showcase his skills in it. Minnesota needs Quintero to score to be effective. He leads the team with six goals, and Miguel Ibarra and Chrisitan Martinez do not look like they can carry the load offensively.

Perhaps the club’s 3-3 draw against the LA Galaxy will help spark some life into the Earthquakes’ season. San Jose fell behind 3-1 before coming back for the point. San Jose had three consecutive draws to close out June. The team needs much more than that before moving significantly up the rankings.

Colorado is finally out of the cellar, both in these rankings and in the Western Conference standings. Colorado is three points clear of San Jose as the Rapids nabbed four points from the last two games in June and started July off with a 1-0 win over Vancouver. Colorado is still a feeble rival though. A move from 23 to 22 is a monumental leap for this woeful side.

Orlando City sacked Jason Kreis and brought in former EPL and Orlando City USL player James O’Connor to try and steer the wayward ship back on course. Orlando’s season though has bottomed out and trying to salvage anything from this year seems to be a lost cause. Orlando lost all five of its games in June, outscored 17-2, and has not won since May 6. It is difficult to believe that this is the same team that won six consecutive games earlier in the season.