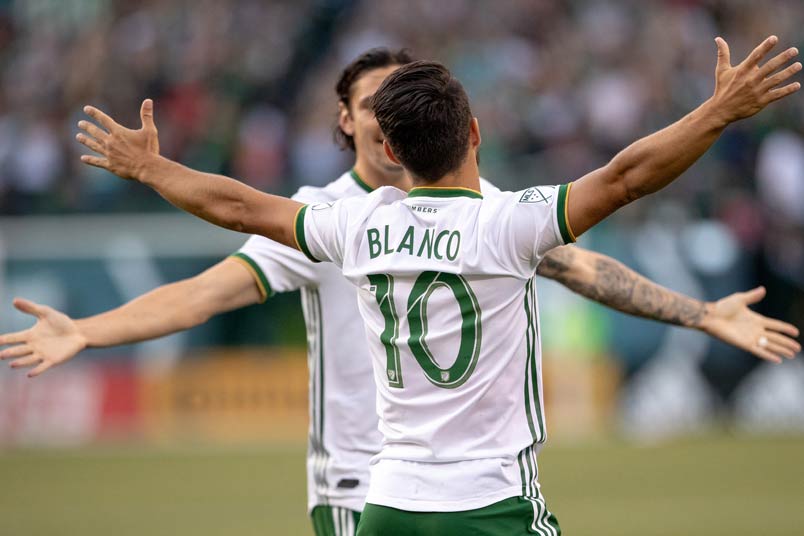 MLS Week 22 continued with Toronto FC shutting out Chicago and Seattle beating NYCFC. Portland also picked up three points with a home win over Houston. In DC, United’s new captain Wayne Rooney broke his nose during their win over Colorado.

The weekend schedule started with Atlanta beating Montreal 2-1 at Stade Saputo. Josef Martinez scored for United in the 31st and 57th minutes with Ignacio Piatti pulling a goal back in the 87th. The game had a delay for weather extending halftime by an hour.

“For the first 65 minutes, we were good,” Atlanta goalkeeper Brad Guzan said. “We kept the ball, created a chance or two. After we scored the second goal, it’s almost as if we stopped playing a bit and invited pressure. And when you give someone like Piatti a chance, he’s going to punish you. The one time I’m able to stay big and put it out for a corner when he gets behind us, he scores one on his next chance.”

Columbus beat the Red Bulls 3-2 away. Jonathan Mensah put New York up in the 7th minute with Patrick Mullins doubling the lead in the 24th. An own-goal made it 3-0 Crew in the 31st. Columbus gave up an own-goal in the 50th minute with Daniel Royer scoring in the 69th.

Toronto FC shutout Chicago 3-0 at home. Jozy Altidore opened the scoring in the 52nd minute, marking his return from injury. Seb Giovinco assisted on Jonathan Osorio’s goal in the 72nd with Giovinco scoring in the 89th minute.

“I think we executed our game plan well in the first half,” Chicago midfielder Brandt Bronico said. “Think they switched formation and we didn’t adjust to it well enough and it ended up hurting us and after first goal we kind of let our guard down and didn’t show enough character to be honest.”

DC United beat Colorado 2-1 at home. Wayne Rooney put DC up in the 33rd with Kellyn Acosta equalizing in the 82nd. A 90th minute own-goal decided the game. Rooney broke his nose and needed stitches after a stoppage time clash of heads.

“I don’t think it’s the first time he’s bled in a game,” DC coach Ben Olsen said of Rooney’s injury. “He is a tough guy and I think that he will shake it off. But again, it shows you what this means to him right now. He is in the box, putting his face on the line, understanding that this is a big moment.”

FC Dallas beat Sporting KC 3-2 on the road. Michael Barrios scored for Dallas in the 23rd minute with Gerso Fernandes equalizing in the 50th. Barrios returned Dallas’s lead in the 62nd and finished off his hat-trick in the 74th. Daniel Salloi pulled a goal back for Sporting seven minutes into stoppage time.

“Coach just asked me to make diagonal passes between the center defenders,” Barrios said. “We know the quality or conditions that Opara, Besler and take advantage of my speed and thank God I was able to score the three goals and a win for the whole team.”

Vancouver beat Minnesota 4-2 at BC Place. The Whitecaps got a three-goal lead from Yordy Reyna (35th minute), Alphonso Davies (56th), and Kei Kamara (64th). Davies assisted on the Reyna and Kamara goals. Minnesota came back with goals from Ibson in the 82nd and Abu Danladi in the 87th. Davies scored again for Vancouver in the 89th with Reyna assisting.

“We are happy to finally get the monkey off our backs and get a clean sheet,” San Jose goalkeeper Andrew Tarbell said. “The whole team worked hard defensively, we are just disappointed that we couldn’t score and win.”

Portland beat Houston 2-1 at home. Sebastian Blanco put the Timbers up in the 7th minute with Romell Quioto equalizing in the 12th. Fanendo Adi scored Portland’s winner in the 80th minute.

It’s just transition and in football it happens,” Adi said about his minutes. “You just have to be grateful for every moment you have on the pitch. Obviously I came here as a young boy four years ago and I was different. But now as a man I think more different, I’m a family guy. I think more like if I’m not playing I need to embrace the team, which is what I try to do when I’m not playing. I support the guys.”

On Sunday, Seattle beat NYCFC 3-1 at CenturyLink Field. Cristian Roldan scored for Seattle in the 36th minute with Gustav Svensson making it 2-0 in the 51st. Jesus Medina pulled a goal back for NYCFC in the 68th with Harry Shipp scoring for Seattle in the 86th.

Week 22 concluded in Carson with the LA Galaxy coming back with a Zlatan Ibrahimovic hat-trick to beat Orlando City 4-3. Orlando took the lead in the 18th minute through a Cristian Higuita goal. Gio Dos Santos equalized with Ibrahimovic assisting in the 39th. An own-goal put Orlando up in the 44th with Dos Santos assisting on Ibrahimovic’s goal in the 47th. Dom Dwyer made it 3-2 Orlando in the 54th. Ibrahimovic equalized in the 67th, scoring the Galaxy’s winner in the 71st minute.