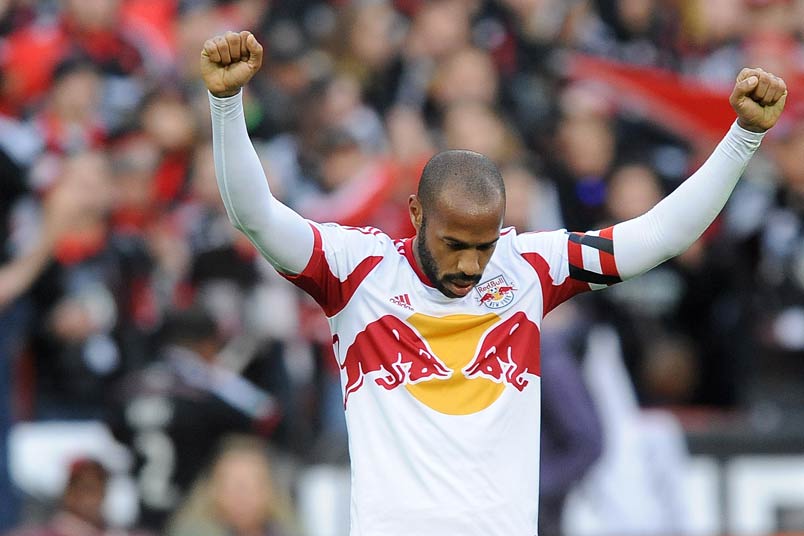 By Jason Davis – WASHINGTON DC (Jul 18, 2018) US Soccer Players - The Thierry Henry period in America was a notable one, for the player, for the team he played for, and for MLS. During a five-year run with the New York Red Bulls, Henry brought his world-class ability and reserved French charm to a league only just entering a new era of maturation. He scored brilliant goals, provided iconic moments, and helped deliver the Red Bulls their first-ever trophy with the 2013 Supporters' Shield.

Henry unabashedly loved New York itself and made no secret that the reason for his move to the United States was a desire to live in the city. While he might not have been willing to risk playing away on artificial turf, Henry appeared genuinely interested in the growth of MLS and the potential that existed for soccer in North America.

Since his playing career ended in 2014, Henry has remained a visible part of the world’s game. The Arsenal legend joined Sky Sports and served as an analyst for the Premier League and the UEFA Champions League. He also did some work with the Arsenal academy before then-manager Arsene Wenger told him he couldn’t work in television and coach for the Gunners simultaneously.

In 2016, he joined the Belgium national team under Roberto Martinez as an assistant coach. Henry was in Russia with Belgium as the Red Devils progressed to the semifinals. Striker Romelu Lukaku praised Henry’s influence in the team and credited the Frenchman with helping him improve as a player. Lukaku went so far as to say that Henry raised his game twice as much as he believed possible.

On Monday, Henry announced his departure from Sky Sports. In his tweeted statement, Henry explained his decision as being directly tied to his coaching goals.

“Over the last 4 years I have had some extremely rewarding coaching experiences in football,” Henry wrote. “These experiences have only made me more determined to fulfill my long-term ambition to become a football manager.”

Already reports suggest Henry has offers to become a manager. It’s certainly possible that leaving Sky is merely prelude to an announcement of his appointment somewhere in Europe. If Thierry Henry is available and on the hunt for a chance to prove himself as the decision-maker for a club, MLS makes sense as a place for his pursuits.

Henry’s former teammate for Arsenal and France, Patrick Vieira, proved that MLS is a burgeoning proving ground for aspiring top-level managers. After a few years working in the Manchester City youth system, Vieira jumped at the chance to move to America and join NYCFC when the club needed a new boss to replace Jason Kreis. It was a calculated risk for Vieira since MLS is still viewed unfavorably in some quarters and had never played stepping stone for a young manager like Vieira to move to a top European league.

Vieira’s two-and-a-half years in New York set him up for a chance first at the Arsenal job, then for the move to Nice in France's Ligue 1. That’s proof-of-concept, especially considering the similarities between Vieira and Henry. Both have ample respect in many quarters because of their playing careers, opening doors that might otherwise be close to others without any managerial experience. Both are multilingual, intelligent, and students of the game. They both have legendary status in France and England.

So what about MLS? We know Henry has a connection to New York, but both of those clubs just completed coaching transitions. If not New York, there could be a few other places for Henry to begin. Miami’s expansion franchise would make a lot of sense if the club is looking to make a splash and enhance its ability to attract a higher class of player. Henry is bound to be a draw as a coach wherever he goes, regardless of his lack of managerial experience. The problem with Miami is that the team won’t start play until 2020 at the earliest..

Could some other MLS locale entice him? Without getting ahead of ourselves on which head coaching jobs might be open around the league in the near future, some clubs might be a difficult sell. Henry’s attraction to New York identifies him as a man with a proclivity for big markets. After New York and Miami, only Los Angeles would seem to fit the bill.

As with so many other steps for MLS, the idea of signing up Henry as a head coach sounds good in the general sense but might break down when considering the circumstances. A job has to be open, the team has to make a worthwhile offer, and Henry has to show an interest.

Those three items are tough in MLS. The timing of Henry’s foray into the managerial world might preclude his moving to MLS as much as anything else. That's disappointing, to say the least.

A return to American for Henry as a coach would be fascinating. His ability to balance an intense desire to win with a sporadic disdain for some of the quirks of MLS made him one of the more entertaining personalities to grace the league. In a coaching role, those traits would be more evident. Henry would be good for MLS, and MLS would be good for Henry.