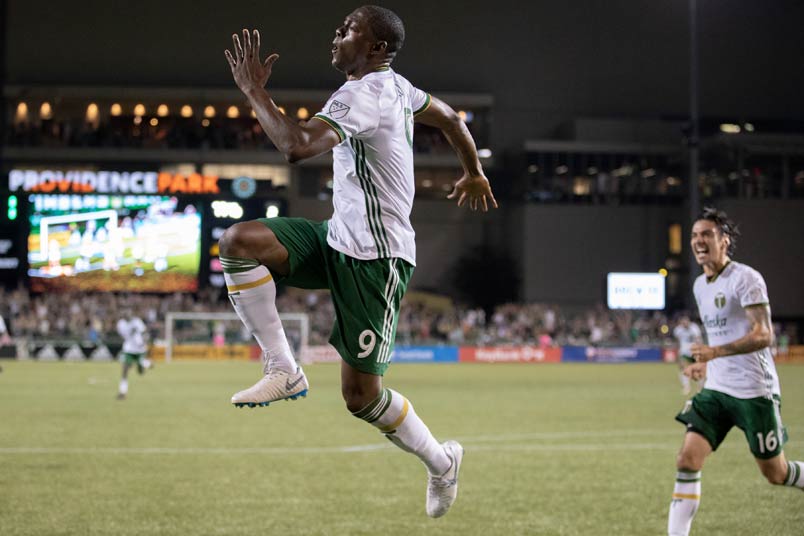 By Jason Davis – WASHINGTON DC (Aug 1, 2018) US Soccer Players – Over the weekend, the newest MLS expansion franchise made their first two MLS moves with a pair of signings. Because FC Cincinnati is attempting to ramp up quickly towards a 2019 launch, the business of building a roster has to start even as the club is in the midst of a final USL campaign. Looking to MLS is playing to the benefit of the second division version of the club, with the two new MLS-caliber players ready to suit up in the lower league.

Right now, Cincinnati has themselves a pair of ringers and a base from which to build for next season.

Both of the players FC Cincinnati acquired became available because the shifting philosophies of their MLS teams saw other players grab playing time that was once theirs. For one, a high profile showdown with his former head coach might have played a role in his departure. It’s clear that shipping the two players out was in the best interest of all parties, the players included.

FCC snagged midfielder Alashe from the San Jose Earthquakes for $75,000 in General Allocation Money and $60,000 in Targeted Allocation Money. The fourth-year former first-round draft pick is best suited to a holding role and was once thought to be the long-term owner of that spot for the Quakes.

Things changed dramatically in 2017 with Kinnear’s firing in late June. Alashe made 13 starts total that season, but only three of them came after Kinner’s dismissal. Interim head coach Chris Leitch chose a different direction, valuing a more open attacking approach to that of Kinnear and leaving Alashe on the bench. It didn’t get better for Alashe when Mikael Stahre became head coach for the 2018 season. Alashe has just 12 appearances and two starts this year.

It was his last appearance for the Quakes that likely sealed Alashe’s fate and his move to Cincinnati. After coming on as a substitute for Anibal Godoy late in the first half of a game in Montreal, Alashe suffered an apparent leg injury. He made it to halftime and was then sent out for the start of the second-half. Stahre then pulled the midfielder off the field before the second-half whistle, a move that appeared to agitate Alashe. The two then had a heated exchange in full view of fans and cameras while the game continued.

Stahre and the club maintained that the decision was because of Alashe’s injury. Sending him out was a ploy to buy time for a replacement to warm up that he agreed to. Regardless, the high-profile showdown on the sideline between Stahre and Alashe opened up wounds in San Jose that the club will deal with even with him gone.

Alashe is still just 25 and should get a fair chance to prove himself for FC Cincinnati head coach Alan Koch heading into 2019. Alashe has too much talent to be wasting away in a club that doesn’t want him. Expectations must be reasonable, but there’s hope again for the one-time rising star.

Fanendo Adi was never an elite MLS striker, but during his four-and-a-half years with the Portland Timbers he was quite often a very good one. Adi’s excellent hold-up play and consistent goalscoring from the center forward position was a key element in Portland’s attack during the best of the Caleb Porter era. Despite his 6’4″ height, Adi played the spot with an agility and athleticism in a multifaceted Timbers system. Adi’s contributions in front of Argentine playmaker Diego Valeri, defensive midfielder Diego Chara, and centerbacks Nat Borchers and Liam Ridgewell gave Portland one of the best spines in MLS and helped the club win an MLS Cup title in 2015.

Adi finished with 16 regular season goals in that championship season and added two more in the playoffs. In total, he scored 51 goals for the Timbers, making him the club’s all-time leading goalscorer before Valeri passed him in August of 2017. Originally on loan with the club from Copenhagen for the latter end of the 2014 season, Adi joined Portland on a permanent transfer at the start of the 2015 campaign as the club’s fourth-ever Designated Player. Adi wasn’t a big name European star, but he lived up to his contract and the Designated Player label.

As of Sunday, Adi is a member of FC Cincinnati. Adi’s time in Portland is over not because he is no longer the goal-threat he once was, but because the situation with the Timbers changed. Faced with reduced playing time and a style that doesn’t fit his strengths under Giovanni Savarese, Adi asked for a move. The Timbers acquired $450,000 in General Allocation Money, $400,000 in Targeted Allocation Money as well as a potential bonus of $100,000 in TAM if Adi meets certain performance metrics with Cincinnati.

The newest MLS club has its first Designated Player. We should be careful not to draw too many conclusions from the signing of Adi, but securing a very good MLS forward for a what is a reasonable cost in the current market is good business.

Of course, FC Cincinnati doesn’t begin MLS play until 2019. There are still four-plus months, including playoffs, left in the 2018 season. The circumstances of these trades and FC Cincinnati playing in the USL makes this an interesting scenario. They can’t stash Adi and Alashe away until next year. They want to play, and FC Cincinnati has the incentive to keep them on a field to build buzz for next season.

Both players will join FC Cincinnati on loan until the end of the year. The semantics are strange. It hardly matters whether each is joining FCC on loans deals from MLS clubs, or if the loan comes from the new MLS version of FC Cincinnati. What matters is that they have players and notable ones. It’s getting real in Cincinnati. Based on the level of the talent the club has acquired, they might be grabbing a USL title on the way to MLS.