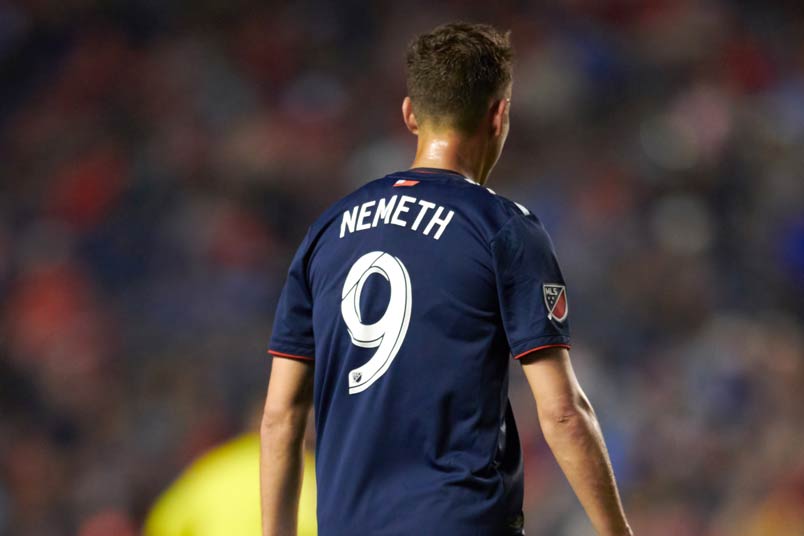 By Jason Davis – WASHINGTON DC (Aug 8, 2018) US Soccer Players – The MLS secondary transfer windows officially closes at midnight on Wednesday, meaning teams have just a few more hours to finish any business for the balance of the 2018 season. The deadline doesn’t often spur a flurry of trades and transfers as it might in other leagues. Still, a few transactions did go down on Tuesday that will shape not only league campaigns for a few clubs but the identity of at least one young MLS side.

Back in 2015, Hungarian international Krisztian Nemeth joined Sporting Kansas City from Roda JC in the Netherlands. The then 26-year old arrived just as he was entering his prime and played a key role in the attack for an eventual playoff team that season. Nemeth took to MLS and Sporting quickly, making the left side of coach Peter Vermes’s 4-3-3 his own that season.

A postseason offer from Al-Gharafa of the United Arab Emirates proved too good to pass up. Nemeth left for a transfer fee reported at $3m. One and done looked like the story for Nemeth, while Sporting reaped a financial reward from his stint in the Midwest.

It turned out it was one and done for Nemeth in the UAE as well. After scoring 13 goals in 26 games for Al-Gharafa, he was ready to return to MLS. Specifically, Nemeth wanted to return to Sporting. He spoke directly about the full stadium experience in Kansas City and how he desired a move back to the club.

MLS rules prevented a direct move back to Sporting when Nemeth left Al-Gharafa in 2017. Because he left the league via a transfer fee, Nemeth was subject to the MLS allocation process. The Columbus Crew sat at the top of the selection order when Nemeth negotiated his MLS return in August 2017, so it was the Crew who reaped the reward when New England traded for his rights. The Revs sent $200,000 in TAM, $200,000 in GAM, and a 2018 international roster spot to Columbus for the forward.

Nemeth didn’t exactly return to his previous MLS form with New England, though it didn’t help that he joined a team that would go on to fire its head coach five weeks after his arrival. With a new coach in charge the sidelines for the 2018 season, Nemeth struggled to convince Brad Friedel, making just four starts to this point in the season.

Nemeth’s move back to Sporting looks like a win-win for both clubs. SKC paid New England $350,000 in total allocation money ($250,000 in TAM, $100,000 in GAM) and a 2020 first round draft pick for a known quantity. Nemeth can step in quickly for a team that needs more goals to be a real contender for the MLS Cup title.

The only real question left is where Nemeth plays. Is he a center forward, the biggest area of need for Sporting? Or is he on the wing where he shined for the 2015 team? That left wing position is currently held down by fellow Hungarian Daniel Salloi. It’s Salloi who has has been Sporting’s best attacking player this season.

Rumors were heavy leading up to the more stunning move of the MLS transfer window. LAFC traded for Christian Ramirez, sending Minnesota United a package of allocation money that could eventually end up totaling $1m. The move was stunning not because Ramirez was crucial to Minnesota’s fortunes this season. His campaign has been decidedly up-and-down for a very up-and-down team. Instead, it’s because Ramirez was a link to the Loons’ NASL past and a beloved figure in Minnesota.

“Fan favorite” hardly does the relationship justice. Ramirez was one half of the “Batman and Superman” duo with Miguel Ibarra that starred for United during the last few years in the second division and made the leap with the club to MLS in 2017.

Ramirez arrived in Minnesota in 2014 and promptly took advantage of a season-ending injury to former NASL Golden Boot winner Pablo Campos. Ramirez went on to win his own Golden Boot that season, scoring 20 goals in 28 games. He added another NASL Golden Boot to his collection in 2016 when he led the league with 18 goals.

From LAFC’s perspective, Ramirez is extra cover at a spot recently hit by injury. Adama Diomande left LAFC’s loss to the Red Bulls on Sunday early, potentially opening up playing time for the newly acquired striker. It’s also a homecoming for Ramirez, who hails from Southern California and played his college soccer at UC Santa Barbara and Concordia University Irvine.

Trading Ramirez will be a tough sell for the United faithful in Minnesota. Signing designated player Angelo Rodriguez meant Ramirez ended up on the bench. That’s despite the Loons’ attack playing well prior to Rodriguez’s arrival. Whatever maturation process MNUFC must go through as it establishes itself as an MLS club, shipping out a figure as beloved as Ramirez will ruffle feathers. Ramirez not only starred for the NASL version of Minnesota United, but he also scored the first-ever MLS goal in the club’s history. The messaging from the club on Tuesday didn’t salve any wounds, with technical director Manny Lagos talking about the 2019 signings that the allocation money will facilitate.

Reminder: The 2018 season is not over. Minnesota United is currently just six points out of the playoff places in the Western Conference.

Trading Ramirez looks like a move that speaks to the evolving identity of Minnesota United. The Loons will finish 2018 in their temporary home before moving into a brand new soccer-specific stadium in 2019. There has long been talk of a “soft launch” approach leading into the move. The signings of two DPs, Darwin Quintero, and Rodriguez, represent a significant departure for a team that declined to bring in an over-budget player in their first year.

Ramirez appears to be the victim of Minnesota’s ramping up to the “full” launch at Allianz Field next year. The Loons chose to take a good return for a former NASL signing rather than squeeze the forward into a plan that includes much higher-priced attacking talent moving forward. It’s a truism that attacking players make the big bucks, especially in a league where seven-figure contracts are at a premium.

It’s an interesting decision for a club that very consciously chose a budget-minded path upon their MLS entry. For a lot of people in Minnesota, Christian Ramirez represented the best about Minnesota United. Now he’s gone. What kind of club is he leaving behind?