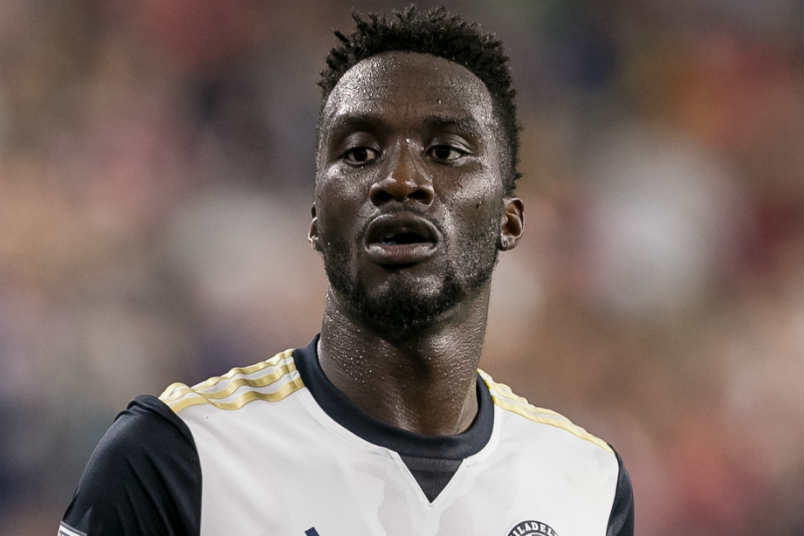 By Jason Davis – WASHINGTON DC (Aug 31, 2018) US Soccer Players – The Philadelphia Union grabbed three crucial points towards MLS playoff qualification with a 2-0 victory over DC United at Audi Field on Wednesday night. The win was the club’s fourth in a row, widening a 10-point gap between the Union and 7th-place New England. It greatly improves Philadelphia’s chances of making the playoffs.

Reasons for the turnaround for the Union are not easy to pin down, but then there’s a lot to say for confidence. A good performance can spawn several more. Jim Curtin’s team is riding a wave of good feelings that started back on August 11 when Philadelphia beat the Revolution 3-2 in Foxboro.

New England was even then in the midst of a late summer swoon, at the time ahead of the Union in the Eastern Conference standings. A victory sparked by two goals from center back Jack Elliot moved Philadelphia past the Revs, a condition that has held ever since. The club also booked a place in the US Open Cup final by taking down the Chicago Fire on August 8. Philadelphia will get a third crack at the first trophy in team history on September 26 in Houston.

It wasn’t that long ago that the gnashing of teeth, not cries of excitement, produced the soundtrack of the Union season. Positioned as a spendthrift team in a large, demanding market, the prospect of a season without an MLS Cup playoff berth cast a dark shadow over the club. The July 31 departure of Earnie Stewart for the new USMNT general manager position complicated matters even further, since Stewart led Philadelphia’s specific brand of team-building identity.

The club moved relatively quickly to hire former Red Bull Salzburg academy director Ernst Tanner to replace Stewart. The hire is a clear sign the Union intends to stay on the path laid by Stewart. It’s one heavy on the kids, with a dose of targeted scouting for veterans of European background. Tanner brings with him respect in soccer circles and a proven track record as an identifier of talent.

It’s easy to forget that the Union made the postseason two years ago as the final qualifier in the Eastern Conference. Philadelphia entered the playoffs that season with the fewest points of any team to advance regardless of conference. Their run ended quickly with a 3-1 loss at Toronto FC.

In 2017, the club accumulated the same number of points as in the 2016 campaign, but finished eighth in the East and missed the playoffs. Far from the worst team in the conference, the Union got stuck in the MLS version of mid-table obscurity.

Barring a disaster, Philadelphia will crest the 42 point plateau in 2018. Currently on 39 points with eight games remaining, the Union have a chance to take a significant step forward in the development of the plan, even if it does come amidst a dose of uncertainty. The playoffs still determine success and failure in this league, but a rise in points represents progress.

Results are the strongest indicator that something is going right in Chester. Because of the Union’s inability to spend with the richest clubs in MLS, the margin for error is almost negligible. Management, as indicated by the hiring of Stewart in October of 2015, wanted to portray the Union as a club intent on developing talent in-house. Making a commitment to young players is an admirable step, but it won’t mollify a fan base anxious for the team to be competitive.

Is it enough for the Union to simply make the playoffs this season? A late-season run to the top six puts a shine on a season that has at various points been bereft of goals and marked by poor runs of play. The big swings make recency a major element in how the fan base will rate the direction of the club from here. Selling the budget-plus-homegrown plan becomes much easier if a playoff berth counts as proof of concept.

If Philadelphia does make the postseason, it seems certain that Jim Curtin will return for 2019 regardless of how the Union does once the playoff tournament comes. 2016’s first-round loss came at the hands of the eventual champion and on their patch. If Philadelphia is again forced to go on the road in a knockout round game, the chances are better than 50-50 that 2018 will end in similar fashion. Curtin deserves credit for leading a turnaround that has the club poised for an improvement over last year and for playing his young players.

There’s still a risk to this kind of thinking. MLS teams mired in cycles of mediocrity often get there because they accept simply making the playoffs as good enough. MLS has plenty of examples of teams deciding the coach is the problem only to end up with a series of coaches of similar caliber and never markedly improving.

The Union is just a point back of Columbus for fourth in the Eastern Conference. With fourth comes a home playoff game, something Philadelphia hasn’t had since the club’s second season in 2011. Rather than set the bar at just making the playoffs, getting a playoff game at Talen Energy Stadium must be the goal. Whether that means winning knockout round game on the road and moving into the two-legged conference semifinals or securing a home knockout round game by passing the Crew for fourth doesn’t matter as much as proving that more is possible with the restraints placed on the team.

Philadelphia forward Fafa Picault unintentionally provided the best summation of where the Union stands with a quote following Philadelphia’s win over DC United.

“We’ve proved to people that we don’t suck,” he said. “Everybody thought we sucked. So now that it’s obvious we don’t, we’re doing better. We’re moving up the table. We’re not focused on the teams that are below us. We’re trying to reach as high as we can.”

It’s not exactly uncharted territory for the Union to have the confidence to imagine “trying to reach as high as [they] can”, but it’s been a long time since that territory even appeared on the horizon.

Things can change, and the Union might still drop out of the playoff picture. Stranger things have happened. The odds are good that they won’t, however, and that’s something new for a club that so often set its fans up for disappointment.

Will a postseason berth foster a new spirit of success in Chester? Anything is possible.