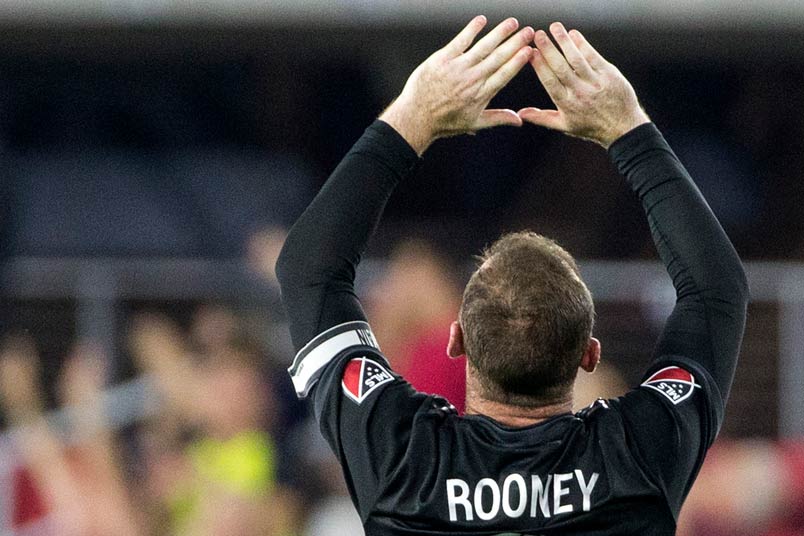 By Jason Davis – WASHINGTON DC (Aug 17, 2018) US Soccer Players – DC United signing English superstar Wayne Rooney generated more than a little bit of doubt among American soccer watchers. Several European stars have made the jump to Major League Soccer and treated their time in North America as semi-retirement. The big paycheck and the cushy lifestyle, perhaps combined with the differences in quality between Europe and the United States let to a something less than full commitment. Whatever extra publicity they brought didn’t live up to what happened on MLS fields.

In just seven games with DC United, Rooney has proven most of the doubters wrong. Even allowing the “desperate” nature of United’s acquisition of Rooney, adding him in conjunction with the opening of Audi Field looks like an excellent move for the team. The away-heavy first half of the season put United in a hole. It looks now like there’s a very good chance that the club could pull themselves back into the playoff race. That’s thanks to a home-heavy second half and an improvement in play prompted by Rooney.

Before Rooney’s arrival, United had just two wins in 14 games. Since coach Ben Olsen inserted him as a sort of “false nine,” dropping deep into midfield and allowing players like Paul Arriola and Luciano Acosta to run into space vacated by his movement, DC has four wins. Before Rooney: 11 points from 14 matches. After Rooney: 13 points in seven matches.

Wednesday night’s victory over Portland was the biggest sign yet that something is changing in Washington. Facing a team that had just seen a 15-game undefeated streak end, United dominated proceedings on their way to a 4-1 win. Rooney himself scored twice and hit the crossbar, his best showing to date on the attacking end of the field.

Any questions about Rooney’s level-of-effort ended after Sunday night’s game-winning assist. Rooney’s defensive run, tackle, and recovery against Orlando City in the dying moments of the game stands as the most visible example of Rooney’s commitment. Rooney helped his team to three important points in decidedly dramatic fashion.

It’s too much to say the effort was “extraordinary,” but since the fear is that European stars might not meet those standards, Rooney’s contribution deserves praise.

Rooney’s arrival was the launching point for United. The team is better. Its playoff chances have improved dramatically. With the question of Rooney’s commitment settled, the only question for DC is whether it’s too little, too late.

Toronto FC needs its own launching point if the defending MLS Cup champions are going to have a chance to defend their title in 2018. A season so far undermined by fatigue, injury, and inconsistency is reaching a critical “put up or shut up” phase for Greg Vanney and company.

Maybe the Reds can build on what happened Wednesday at BMO Field. Toronto defeated Vancouver 5-2 on the day, but the result wasn’t an MLS regular season match. It was the second-leg of the 2018 Canadian Championship, a series TFC won 7-4 on aggregate.

The win adds no points to Toronto’s total in the Eastern Conference standings and therefore won’t be of any help towards securing a playoff spot. However, it might serve as the confidence boost the club needs to charge into September with a chance at the top six. Jozy Altidore hit for three goals and Sebastian Giovinco scored in the type of attacking performance that can go a long way towards making a team feel good about itself. A trophy can do wonders.

Altidore will be the focus, and perhaps the key to success, during the stretch run for Toronto. The American forward missed more than two months after undergoing surgery to repair a broken foot and the club suffered greatly for his absence. Depth is a strength for TFC, but there was no way to cover for the strength, movement, and passing ability of Altidore during his time out of the lineup.

Toronto won’t have Altidore for the next MLS match away to San Jose due to a red card suspension. A poor decision to kick out at Alexander Callens of NYCFC earned the forward an ejection and put his team down to 10 men early in a 3-2 home loss on Sunday. With TFC languishing in the bottom half of the Eastern Conference standards and every point precious for the playoff chase, the loss of Altidore for almost 80 minutes and the dropping of points at home was a big blow to Toronto.

Any reasoned analysis of Toronto is difficult because of Altidore’s red card. Against Atlanta the week before, TFC looked like a 2017 version of itself and prompted the discussion that the playoff push was beginning in earnest.

Current projections put the playoff line in the East at 43 points. That means Toronto will need to collect 20 points in its final 11 games to have a real shot at the postseason. Averaging the 1.8 points-per-game it would take looks like an extremely tall order, no matter the health and quality TFC possesses in the side.

Toronto’s remaining schedule includes six home dates and five games on the road. Among the away trips are visits to the Timbers, the Red Bulls, and DC United. Those are three difficult games against good or improving opponents. TFC also hosts LAFC and Atlanta, two of the highest scoring teams in the league. That’s a problem for a team that has struggled to stay consistent defensively.

When the season began, the idea that DC United might still have a chance at the playoffs after trailing the entirety of the Eastern Conference pack for most of 2018 would have been laughable. Almost equally as ridiculous would have been suggesting that Toronto FC, triple trophy winners in 2017, would need a torrid final 11 games to even have a chance at a bottom seed for the postseason.

DC might have launched its bid for a return to the playoffs on the back of a boost from Wayne Rooney and the advantage of a new stadium. Toronto FC will hope they did the same with a big victory in another competition.