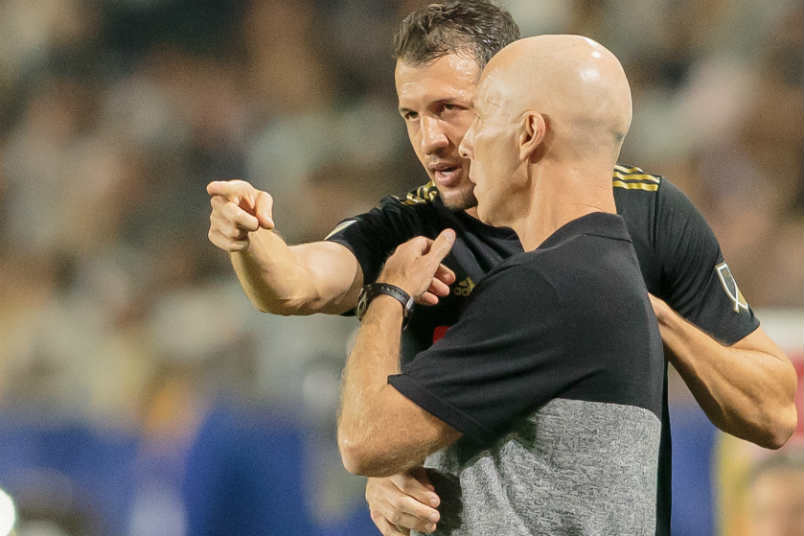 By Jason Davis – WASHINGTON DC (Aug 29, 2018) US Soccer Players – Laurent Ciman scored the first-ever goal in Banc of California Stadium history back on April 21. The center back hit a hard, low free-kick that Seattle’s Stefan Frei fumbled into his net. LAFC would go on to win the game, creating an indelible memory for the capacity crowd in the venue and for all of the new fans of Major League Soccer’s newest club. For a player who never really wanted to be in Los Angeles in the first place, it was a poignant moment.

Ciman moved to MLS in 2015 when he joined the Montreal Impact from Standard Liege in his native Belgium. The move came in large part because of Ciman’s desire to place his daughter into a specialized program for French-speaking autistic children. Family, not soccer, was the main driver of his choice to jump across the Atlantic.

The trade that sent Ciman from Montreal to the expansion side in California came as a shock to the player and much of the league. The story of Ciman’s daughter and the reason for choosing Montreal was well known, so the choice to move him without his approval seemed almost cruel. It was a distinctively MLS moment.

Despite his upset over the move, Ciman didn’t let it impact his play in California. LAFC named him captain in recognition of his experience and leadership from the back of the formation. He scored two goals in addition to the first one at Banc of California Stadium and was a stalwart of a defense that contributed significantly to the club’s expansion season success.

With the stretch run of the regular season underway and LAFC embroiled in a battle for the playoffs, Ciman is leaving. LAFC dealt him to Dijon in France, a place that fits better for his family and will provide him with some contract stability at the age of 33. LAFC didn’t want to give the defender the two-year extension he was looking for at a rate close to the $661,666.67 he is making in 2018.

Ciman credited LAFC for facilitating the switch, pointing to the way the club put the best interests of the player and his family above its own. It would be easy to suggest LAFC simply did the prudent thing with a wantaway player, but the MLS outfit would have been well within its right to keep Ciman and only allow him to leave after the conclusion of the season.

It’s not hyperbole to suggest LAFC jeopardized its chances at playoff success by selling Ciman. What LAFC loses in certainty at center back, it likely gains in reputation as a player-friendly club. Ciman’s social media posts illustrate the sort of positive publicity that comes from doing the right thing.

If the player wasn’t so adamant about a transfer for family reasons, LAFC would surely prefer not to part ways with Ciman, especially with the secondary transfer window already closed. Although Danilo Silva came in on loan from Internacional in Brazil at the beginning of the month, depth at center back is now an issue. The ups and downs of a long season pushed Walker Zimmerman down the pecking order, but the former FC Dallas man will now be thrust back into a preferred position.

Dejan Jakovic will backup Silva and Zimmerman. An injury to either of the presumed starters could be disastrous.

The late changes to teams chasing playoff spots are not limited to Los Angeles. Ciman is the most high profile departure, but other clubs are doing business. The Philadelphia Union sent winger Eric Ayuk to Turkish club Osmanlispor FK on Tuesday. The Union signed Ayuk in 2015, but the Cameroonian spent most of the last three season out on loan. He made no appearances for Philadelphia in 2018.

Two weeks ahead of the roster freeze date of September 14, two clubs added pieces they hope will fill gaps, provide depth, and aid in a playoff run. Players moving on free transfers are not subject to the transfer window that closed on August 8.

FC Dallas acquired veteran Colombian midfielder Abel Aguilar on Tuesday from Deportivo Cali. Aguilar is a veteran of three World Cups and played 32 minutes for the Cafeteros at the most recent edition in Russia. He’ll provide experience and cover for a central midfield left thinner after the trade of Kellyn Acosta to Colorado.

The move is an obvious nod to the rough-and-tumble nature of the MLS Cup playoffs, where the ability to grind out results is key to making a deep run. If FC Dallas’s August signings are meant to solidify a team with every reason to expect it will be in the playoffs, Minnesota United’s transactions are a desperate roll of the dice as any chance of making the postseason slips further and further away.

The Loons added some attacking firepower in the form of Darwin Quintero back in March and reaped some benefits, but can’t seem to keep opponents from scoring on the other end of the field. Minnesota’s 52 goals conceded in 2018 ties them for second-to-last in the league with the Chicago Fire.

With that problem in mind, Adrian Heath’s team acquired 30-year old Brazilian defensive midfielder Fernando Bob to help stem the tide. Minnesota has struggled to fill the position since Sam Cronin was ruled out indefinitely due to concussion symptoms in the preseason.

Time will tell what kind of roll the new additions in Dallas and Minnesota will play in the final two months of the regular season. Fernando Bob is probably playing for a role in next year’s Loons side, while Aguilar appears to a short-term boost for a team with MLS Cup aspirations.

Adding players is certainly easier than losing one, especially when the player lost has played in all but five games of the season and wore the captain’s armband throughout the campaign. September arrives as a proving ground for new additions, but also for Bob Bradley’s ability to navigate his LAFC team through a massive change in its makeup both on the field and in the locker room.