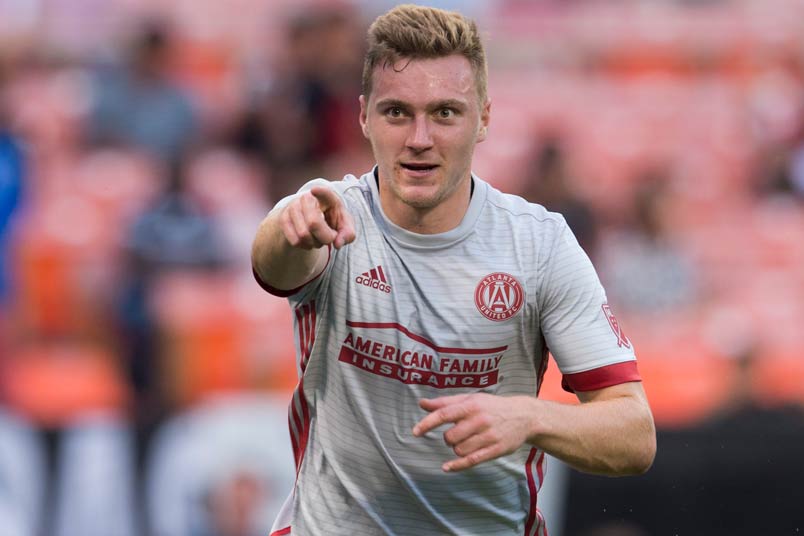 By Jason Davis – WASHINGTON DC (Aug 22, 2018) US Soccer Players – Like every other professional sports league in North America, Major League Soccer hands out an annual award to the best first-year player in the competition. That started back in 1996. That debut season’s winner was Steve Ralston of the Tampa Bay Mutiny, a player chosen in the league’s first-ever college draft.

More specifically, MLS hands out an annual award to the best first-year player in the competition who doesn’t have previous professional experience. Ralston qualified because he was fresh out of Florida International University when he played 31 games and scored seven goals for the Mutiny.

All of those players, like Ralston, progressed from the American college soccer to MLS. In fact, 21 of the 22 winners of the Rookie of the Year Award played college soccer. Only Andy Najar, a DC United homegrown signing in 2010, won the trophy without playing the college version of the game.

The 2018 winner almost certainly be a college product, at least in some measure. Leading candidates for the award this season are Corey Baird, a Real Salt Lake midfielder who played at Stanford, Mark McKenzie, a Union academy product who spent a season at Wake Forest University, and Chris Mueller, an Orlando City draftee who starred at forward for four years at Wisconsin.

Part of the problem in identifying obvious candidates for the award is that playing time for first-year players with zero professional experience prior to 2018 is shrinking. The league’s push to bring in new talent from abroad through allocation money and a move towards integrated development structures have changed the landscape dramatically.

The Homegrown status of Baird and McKenzie points to the new reality for young players entering the league. The draft is no longer the sole deliverer of new talent to MLS roster, with clubs taking more and more control of that process. Baird and McKenzie chose to take sojourns to college programs but returned to their clubs to sign contracts when it came time to turn professional.

While Baird and McKenzie are eligible for the award as first-year professionals signed to homegrown contracts, the shifting paths for player development mean many players developed in club academies won’t be when they start to make their mark at the first team level. That’s because MLS teams are relying more and more on USL sides as incubators of their homegrowns after they sign professional contracts. Playing even a single game as a professional at the USL level in one season disqualifies a player the Rookie of the Year Award in MLS the following season.

Notably, McKenzie played with Bethlehem Steel in 2017 but didn’t sign a professional contract. That makes him a Rookie of the Year candidate. His teammate and fellow Union academy graduate Auston Trusty can’t win because although he never featured for the Union prior to 2018, he played games as a professional for Bethlehem Steel.

All of this suggests that MLS should rethink the Rookie of the Year Award. With no offense meant to Baird, McKenzie, Mueller, or the handful of other players who might merit a mention as the best rookie in the league, the focus is no longer on players of their type. The first-year pro straight out of college may never disappear completely from Major League Soccer rosters, but the influence they have has waned to the point that finding worthwhile candidates for the Rookie of the Year Award is frustratingly difficult.

The league should find a way to include two groups rendered ineligible by the current Rookie of the Year standards.

One is the USL-developed player, especially those signed to homegrown contracts. The intention of the “first-year professional” rule is to prevent players who have experience in foreign leagues from coming to MLS and winning the award. Fair enough, but treating a stint at the USL level particularly for a single season as equal to leagues abroad runs counter to the spirit of recognizing “rookies”.

Even players who play minimal MLS minutes one season should be Rookie of the Year-eligible the next. A reasonable bar of say, 400 minutes would allow a player like FC Dallas’s Reggie Cannon to be in the running this season despite the single minute he played in 2017. Major League Baseball has a similar policy that prevents late-season call-ups in one year from being Rookie of the Year-ineligible the next.

The second group largely left out of the awards and the umbrella under which the Rookie of the Year falls is young players signed from outside of the league. MLS’s ramping up of its participation in the international transfer market means there are a host of very young players across the League who represent a new era for the competition. It makes sense to highlight that young talent, and yet by rule, they are ineligible to win the Rookie of the Year.

Technically the Newcomer of the Year Award covers those players, but it’s extremely unlikely any will earn serious consideration for it. The Newcomer of the Year Award is almost exclusively the province of established professionals, often with a proven track record and an international resume before they arrive in MLS. Since the league inaugurated the award in 2007, only two players under the age of 24 (23-year old Miguel Almiron in 2017, and 23-year old Fredy Montero in 2009) have won it.

The simplest solution, and one that could shine a spotlight on the league’s intent to develop young domestic talent as well as infuse itself with talented young players from places like South America, is to create a “Young Player of the Year Award” for those under the age of 23. As a hedge against turning the award into a young player’s MVP, a rule declaring winners ineligible for subsequent seasons could be in place.

England’s Professional Footballer’s Association hands out a Young Player of the Year Award every season, recognizing the most outstanding player age 23 or younger in the Football League system. Despite the attempt at inclusion, the award always goes to a Premier League player. There’s nothing stopping the MLS Player’s Association or some other third party from establishing its own awards, though the legitimacy of any award in the US is probably dependent on league sponsorship.

The Rookie of the Year Award, as narrowly defined, served a purpose in MLS for 20 years. MLS can continue to hand it out under the current rules as the pool of candidates dwindles further and further because of initiatives the League itself has put in place. Or it can make some much-needed changes to the award, giving it the meaning it deserves.