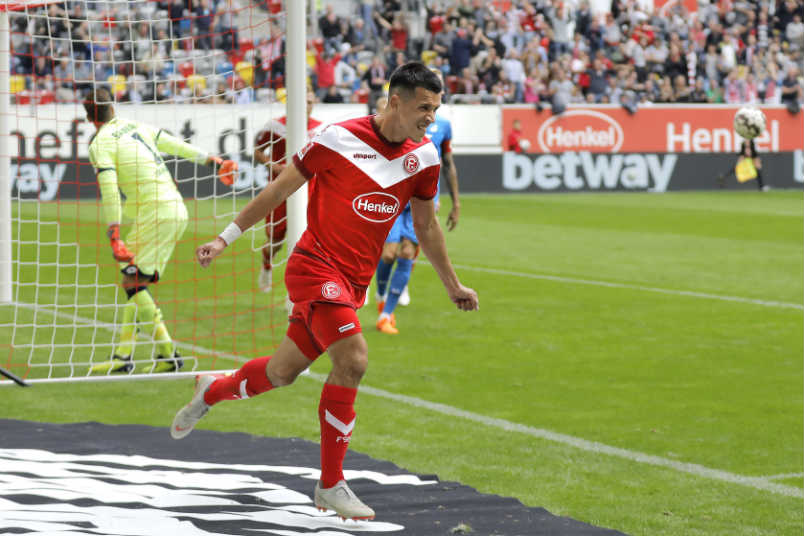 The USMNT players in Europe and Mexico roundup starts with Alfredo Morales scoring for Fortuna Dusseldorf in their 2-1 home win over Hoffenheim in the Bundesliga. Morales put Fortuna up in the 45th minute with Hoffenheim equalizing in the 86th. Dodi Lukebakio converted an 88th minute penalty for Dusseldorf. John Brooks’s Wolfsburg drew 2-2 at home with Hertha BSC. Wolfsburg fell behind in the 61st with Yunus Malli equalizing from the penalty spot in the 87th. Hertha went ahead a minute into stoppage time with Admir Mehmedi equalizing two minutes later.

Fabian Johnson subbed out in the 67th minute for Gladbach’s 2-1 home win over Schalke. Matthias Ginter put Gladbach up in the 3rd minute with Patrick Hermann scoring in the 76th. Schalke’s Breel Embolo scored three minutes into stoppage time. Bobby Wood subbed on in the 65th and saw yellow three minutes later in Hannover 96’s 3-2 loss at RB Leipzig. Hannover fell behind in the 9th minute with Niclas Fullkrug equalizing in the 13th. Leipzig scored in the 40th and 63rd minutes. Milko Albornoz pulled a goal back in the 65th.

In the 2.Bundesliga, Julian Green scored in stoppage time for Furth in their 4-1 home win over Holstein Kiel. Green subbed on in the 69th minute. Daniel Keita-Ruel scored for Furth in the 52nd with Yosuke Ideguchi adding a goal in the 60th. Keita-Ruel scored again in the 83rd. Holstein Kiel pulled a goal back in the 87th with Green scoring a minute into stoppage time. Terrence Boyd subbed on in the 77th minute for Darmstadt’s 1-1 home draw with Sandhausen. Philipp Klingmann put Sandhausen up in the 46th with Tobias Kempe equalizing in the 90th minute. Andrew Wooten wasn’t in the squad for Sandhausen. In the Regionalliga, Josh Sargent subbed out int he 87th minute for Werder Bremen II’s 1-0 win at Lupo Martini Wolfsburg. Jonah Osabutey scored in the 6th minute.

DeAndre Yedlin’s Newcastle United lost 2-1 at home to Arsenal. Trailing by two goals from the 58th minute, Ciaran Clark pulled a goal back a minute into stoppage time.

In the Championship, Geoff Cameron subbed on in the 73rd minute for QPR’s 2-1 win at Bolton. Luke Freeman scored for QPR in the 26th minute with Eberechi Eze doubling the lead in the 56th. Bolton pulled a goal back in the 69th. Antonee Robinson’s Wigan Athletic lost 2-0 at Brentford. Wigan fell behind in the 24th and went a man down in the 58th with a red card to Sam Morsy. Brentford scored again in the 63rd. In League One, Lynden Gooch’s Sunderland lost 2-1 at Burton Albion. Trailing from goals in the 19th and 36th minutes, Chris Maguire scored for Sunderland in the 54th.

Emerson Hyndman subbed out in the 72nd minute for Hibernian’s 3-2 home win over Kilmarnock in the Scottish Premier League. Stevie Mallan scored for Hibs in the 12th with David Gray making it 2-0 in the 23rd. Kilmarnock scored in the 26th and equalized in the 44th. Florian Kamberi converted a 78th minute penalty for Hibs.

In Spain’s Segunda.B, Shaq Moore subbed on in the 69th minute for Reus’s 1-0 win at Tenerife. Alfred Planas scored in the 80th minute with Edgar Badia keeping the clean sheet. Kenny Saief subbed on in the 64th minute for Anderlecht’s 1-0 loss at Genk in Belgium’s Pro League. In Ligue 1, Matt Miazga saw yellow in the 77th minute of Nantes’ 0-0 home draw with Stade Reims. Nantes finished with 6 shots on goal to Reims’ 0.

USMNT players met in the Eredivisie with Andrija Novakovich’s Fortuna Sittard winning 3-2 at Eric Palmer-Brown’s NAC Breda. Mitchell te Vrede put NAC up in the 4th minute. Ahmed El Messaoudi equalized in the 41st and put Fortuna ahead in the 53rd. Gervane Kastaneer equalized for NAC in the 71st. Branislav Ninaj scored Fortuna’s winner in the 81st minute.

Liga MX and Jose Torres saw yellow in the 30th and subbed out in the 54th for Puebla’s 1-0 win at Queretaro. Vladimir Lorona scored in the 49th minute with Nicolas Vikonis keeping the clean sheet. Ventura Alvarado’s Necaxa shutout Cruz Azul 2-0 at home. Matias Fernandez scored in the 18th minute with Victor Davila doubling the lead from the penalty spot in the 85th. Hugo Gonzalez kept the clean sheet for Necaxa with three saves. Alvarado saw yellow in the 50th minute.

Michael Orozco’s Lobos BUAP lost 4-2 at UNAM Pumas. Lobos fell behind in the 7th minute with Michaell Chirinos equalizing in the 58th. Pumas added goals in the 66th and 68th minute. Leonardo Ramos scored for Lobos in the 74th with Pumas adding a fourth goal in the 84th. Omar Gonzalez’s Atlas lost 1-0 at home to Tijuana. Both teams went a man down with a red card to Tijuana in the 14th and Atlas in the 38th. Luis Fuentes scored the game’s only goal in the 56th minute. Gonzalez saw yellow in the 13th. Rubio Rubin wasn’t in the squad for Tijuana.