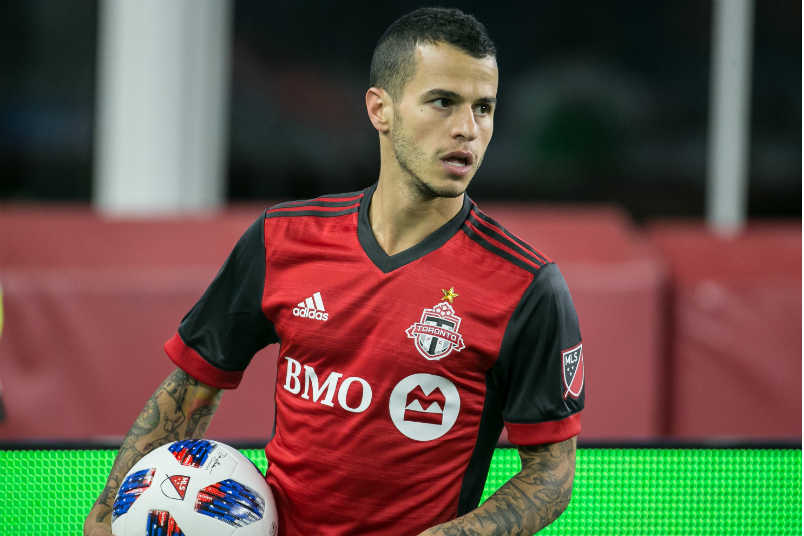 By Clemente Lisi – NEW YORK, NY (Sep 24, 2018) US Soccer Players – If you’ve been to BMO Field in the past few months or watched Toronto FC on television, you know how difficult this season has been for the defending MLS champions. It was just 12 months ago that the Reds were completing a remarkable regular season and embarking on what would be a magnificent playoff run. A year later, all that has changed.

This past Saturday’s match at Red Bull Arena was a microcosm of Toronto FC’s season. The 2-0 defeat to the New York Red Bulls illustrated the poor defending that has characterized much of this season. Although Toronto FC played well for long stretches, it was the mistakes and the inability to recover from them that hurt Greg Vanney’s team in the end. With the players both tired and visibly frustrated by game’s end, the slow walk back to the visitors dressing room had the look of a team with little fight left in it. The loss also put the league champions on the brink of missing the MLS Cup Playoffs with five games left on the schedule.

While summer surges by the Seattle Sounders and DC United have been the talk of MLS, other teams haven’t been so successful following a poor start to the season. Toronto FC lost the Concacaf Champions League final earlier this year on penalty kicks. Now, they’re on the wrong side of the red line in the MLS Eastern Conference standings. A sudden Toronto FC surge may be too late.

“We’re going to need some help. It’s MLS and the end of the season and anybody can beat anybody,” said captain Michael Bradley. “Teams can go on some crazy runs.”

The victorious conclusion to last season’s treble-winning side had some calling Toronto the greatest MLS team in history. They appeared destined to win multiple MLS Cups. But a congested season, poor defending, a spate of injuries, and a poor start to the MLS season have led to the meltdown of this would-be North American soccer powerhouse. The regular season can be long and forgiving, where teams are afforded plenty of room to make mistakes and still clinch a postseason berth. Toronto FC is testing that theory if they want to finish sixth and make the playoffs.

Toronto has grabbed just eight points out of a possible 27 in the last seven matches. Going into the past Saturday’s game against the Red Bulls, Toronto FC had yet another continental commitment in having to play the first Campeones Cup against Mexican champion Tigres UANL. The 3-1 loss at home left the team both emotionally and physically drained.

Before the start of the MLS season, Toronto FC had gone on a strong Champions League run that culminated with the two-leg final, played on April 17 and 25, against Chivas. Both those games took place just a month into the MLS season. Toronto, looking to become the first MLS side to win the trophy since the tournament revamped in 2008, put most of its energy into the Champions League.

At the same time, Vanney’s side had a shot at a continental trophy, Toronto put together a 1-4 MLS record with losses to Columbus, Montreal, Colorado, and Houston going into the second-leg versus Chivas. Toronto had lost games to opponents it had defeated during the 2017 season when they finished with a 20-9-5 regular-season record. After the Champions League, Toronto had to make up ground in the East. Fatigue and injuries began to tell an unfortunate story.

The defending has been so bad that Toronto FC is on pace to give up a team-worst 66 goals, more than the 62 they gave up in 2012 when they went just 5-21-8. By comparison, the team conceded just 37 goals last season. Again, injuries are key to Toronto’s issues. Defenders Drew Moor and Chris Mavinga, for example, have yet to start a game together this season. Sebastian Giovinco left the Tigres match late in the first half at BMO Field due to calf cramps after taking a bad spill. As a result, he missed the game against New York. Against the Red Bulls, Jozy Altidore also suffered an ankle injury and had to be subbed out midway through the game.

In August, Giovinco blasted the playing surface at BMO Field, saying at least every game sees a player go down with an injury. Although BMO Field uses natural grass, field crews often add sand to it to help with its overuse. The Toronto Argonauts of the Canadian Football League as well as Toronto FC’s academy teams use the stadium.

“We continue to put sand on the grass… Everybody plays on this field and every game we lose a player (to injury),” he told ESPN. “This is not possible.”

Turf issues aside, Toronto can’t look back, only forward. Toronto host New England this Saturday and Vancouver on October 6th. The Reds then travel to Washington to take on DC United on October 17th. They’re on the road again a week later to play rivals Montreal Impact. Toronto closes out the regular season on October 28th at BMO Field against Atlanta United.

“Our performance at times (this season) have not been bad, but we have found ways to shoot ourselves in the foot… My expectation is that everyone will fight, compete and battle until the end,” Vanney said. “We have a lot to prove and get back on the winning side at the tail end.”