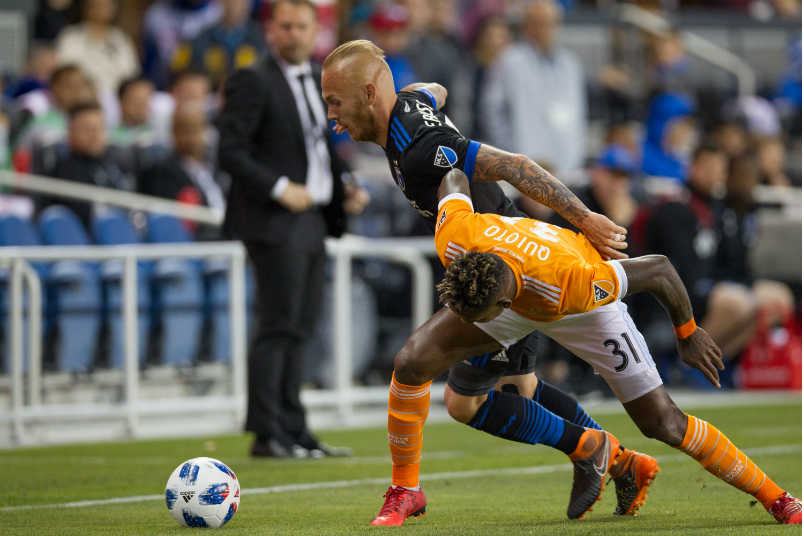 By Jason Davis – WASHINGTON DC (Sep 19, 2018) US Soccer Players – The San Jose Earthquakes are the latest MLS team who will be looking for a new head coach come winter. San Jose relieved first-year boss Mikael Stahre of his duties on Monday with just six games to go in the 2018 MLS regular season. Assistant Steve Ralston will serve as the interim head coach for the balance of the campaign. After four head coaches in the past year and a half, the Quakes are starting over. Again.

Joining San Jose in the market for a new head coach is the LA Galaxy, who parted ways with Sigi Schmid last week. A handful of other MLS sides might be looking as well, pending the outcome of the season and the whims of management.

Identifying and hiring a new head coach is hardly straightforward, especially for teams in the MLS 3.0 era. What used to be acceptable is quickly becoming a sign of middling ambition or stinginess. The pace of financial commitment has picked up, and it doesn’t just apply to players anymore.

Hiring a new coach is also a matchmaking affair. It’s not enough for a club to want to hire a top coach, coaches have to see the club as attractive and potentially beneficial to their future careers. No coach wants to take a job that will sully their reputation, even if the pay is good.

Which MLS head coaching jobs are the most attractive? If they came open, what caliber of coach would they attract? Clubs can put effort into recruitment and punch above their proverbial weight with the right pitch. Still, there has to be something uniquely attractive about the job to get them on board.

That was the case for Atlanta United when the club convinced Gerardo “Tata” Martino to take on their project ahead of a 2017 launch. Martino’s significant salary was a factor, but it was also the chance to build a team from scratch and establish his style on that blank slate.

Since Martino’s arrival, Atlanta has moved to the top of the list of most appealing jobs in the league. The combination of first-class facilities, massive home crowds, and the established level of play for United means that even if Martino departs for a new opportunity, Atlanta United will attract interest from a higher caliber of coach than any other team in MLS. The bar is set.

Deciding who comes in behind Atlanta is difficult. There are a handful of contenders, all of whom lean on something slightly different to make their head coaching positions enticing.

Toronto’s case is strong, though it’s a job that has only proven to be good over the past few seasons. Greg Vanney is the first man to succeed with the Reds, something that points to how difficult being the head coach of Toronto FC was prior to 2015. The hires of Tim Bezbatchenko as general manager and Bill Manning as president helped solidify a notoriously messy executive group. That’s a part of any club worth stressing when it comes to the ability to sign better head coaches.

Beyond the front office, Toronto has its own rabid fan base and top-notch facilities. An assessment of the tools available puts the Canadian club ahead of anyone outside of Atlanta. When the time comes to move on from Vanney, Toronto should be able to collect a strong group of candidates, regardless of recent results.

Recent results certainly matter, but MLS is a unique beast in that regard. The top job is in Atlanta before the club has ever won a trophy. Two other clubs can claim spots near the top. One is still in the midst of its first season. Another won’t play a game for more than a year.

The appeal of LAFC is obvious. There’s a brand new stadium in a vibrant area of Los Angeles proper. committed owners with a splash of celebrity, and an energized fan base. Location is key to LAFC’s image and a part of the attraction for both players and coaches. It’s much easier to recruit, especially outside of the US and Canada, when you can point to your cosmopolitan surroundings. The weather in Southern California helps, too.

Miami figures to be similarly attractive. Such is MLS that a team that hasn’t signed a player and doesn’t have an official stadium plan could be among the top jobs in the league. To be fair, Miami will always be a destination because of the city’s quality of life factor. That’s something that should stand David Beckham, another part of Miami’s draw, and his club in good stead.

Toward the middle of the League are Sporting Kansas City, a consistently good club with a top stadium. FC Dallas, home to an excellent academy. Portland, a club with fantastic fans and good location. Seattle, a year-to-year contender that gets big crowds.

This is also where you can find the likes of the Whitecaps, a team with a strong but underutilized academy and one of the most beautiful home cities on the continent. NYCFC deserves a mention because it’s New York City. That’s despite the questionable appeal of coaching a team that plays on a tiny field in a baseball stadium.

In New Jersey, the Red Bulls fall into that same bucket, although with the much better stadium situation. Attracting a quality coach to lead a club with a strong reputation playing just across the Hudson from New York City shouldn’t be difficult.

The teams at the bottom end of the rankings are largely there because of poor leadership in recent years. Depressed results and a chaos-laden structure will turn off any coach, much less one capable of turning around clubs in trouble.

It’s difficult to make an argument for Colorado as a good place to be a head coach at the current moment. The lack of front office stability and a track record of incompetence is a major part of why both San Jose and the Galaxy will head into the winter working from positions of weakness in the search for a new coach.

The Quakes continue to fight an uphill battle due to a number of factors, not the least of which is the rampant turnover they’ve had at a number of key positions the last few seasons. Direction is lacking. No coach will jump at the chance to take on a rudderless ship.

The Galaxy has no excuses. If the head coach position with one of Major League Soccer’s highest-profile clubs garners less interest than it should, it’s because of a protracted period of decline largely of the club’s own making. Poor signings across the team led them to this point. It’s debatable how much of the club’s problems were down to the coaching staffs.

Coaching the LA Galaxy is no longer the cherry gig it used to be. It’s not the worst job in the league, but that’s not saying much.