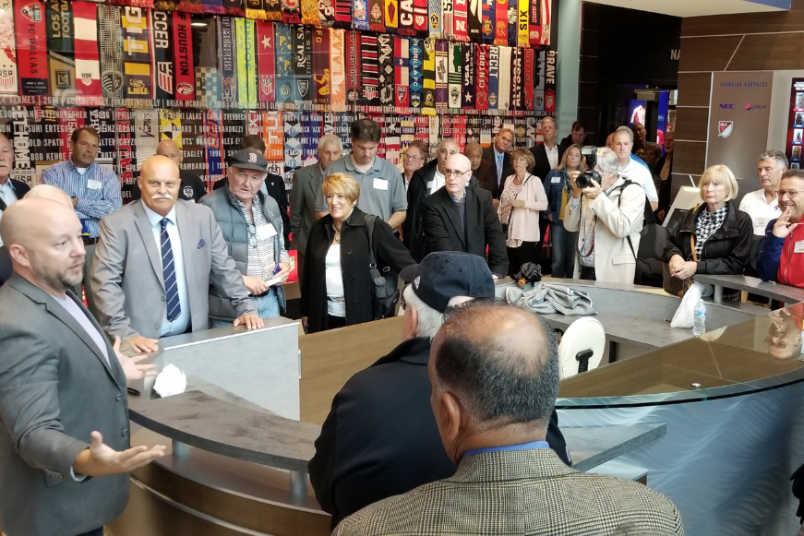 By Charles Boehm – WASHINGTON, DC (Oct 26, 2018) US Soccer Players – First things first: The new National Soccer Hall of Fame is gorgeous. The sleek, airy $55 million facility is a welcome addition to the American game’s “bucket list” of must-see attractions, restoring the Hall to life after nearly a decade after the closure of its previous home in Oneonta, New York. Yet as with so many matters of history, memory and collective experience in these times, it’s also complicated.

Built into the remodeled south end of Toyota Stadium, home of FC Dallas, the new Hall opens to the public on November 2. A few journalists, VIPs, and other visitors got an advance preview of the place last week as it hosted its first major event, the induction ceremony for a 2018 class that included USMNT legend Brad Friedel and a busy weekend’s worth of related activities.

Chief among them was a 50th anniversary celebration of the old North American Soccer League, which came into existence in 1968 and died in 1985, yet still casts a long shadow across the sport. That occasion reunited dozens of NASL old-timers in Frisco for the weekend, capped by a “legends game” at the stadium after Sunday’s MLS match between FC Dallas and Sporting KC.

The NASLers gathered at the Hall for a tour of their own on Friday afternoon. I had the pleasure of experiencing the exhibits with that group of trailblazers, who shared many laughs and old stories as they meandered through.

“Having seen the setup in New York, they worked hard for a long period of time, but it was dated. And it didn’t have the traffic that comes by in a city like Dallas,” said former Dallas Tornado striker Kyle Rote Jr, one of the NASL’s few homegrown stars and a USMNTer with five caps to his name. “The common population can get exposed to the Hall of Fame here. And the technology that is put into so many of these presentations here is at an A+ level, and it brings back great memories, and a great sense of satisfaction that we indeed had lives that counted for something. And what it counted for in many ways was distributing the game of soccer in this country.”

The new Hall of Fame is the first landmark of its kind in major-league North American pro sports that’s part of an active stadium. In addition to the usual artifacts like jerseys, photographs, boots, and balls, it features advanced technology like facial-recognition and virtual-reality software to provide a customized, cutting-edge experience. Unlike its predecessor in remote upstate New York, it’s located in the midst of a massive metropolitan area, a short drive from millions of North Texas residents as well as one of the world’s busiest airports.

Everyone seemed to agree that the new place is, on balance, a marked upgrade on the old one. That it represents a necessary evolution from the past. And that it sensibly seeks to connect with younger generations who view the game and the world differently from their elders. That part connected with their own experiences as soccer evangelists.

“When we came to Dallas in ‘71, [legendary coach Ron] Newman said you’re 50 percent a player, 50 percent an ambassador,” said English ex-Tornado Bobby Moffat, one of the NASL reunion’s lead organizers. “And that’s what we all were and we still are. That hasn’t stopped.”

Another influential figure, former Baltimore Bays and Tampa Bay Rowdies and briefly, USMNT coach Gordon Jago, beamed as he took in the scene. He’s already making arrangements for participants in the famed Dallas Cup youth tournament to tour the new Hall. Still, there was a bittersweet tinge to the NASLers’ visit, even with icons of their era like Pele, Johan Cruyff and Giorgio Chinaglia occupying prime real estate.

“Well, this is kind of sweet and sour, in a way, because we were part of the growth of soccer since 1967,” said Charlie Schiano, owner and chairman of NASL’s Rochester Lancers. “And this is very handsome and well done, but I think there should be a little more attention to the work that was done in the ‘60s and early ‘70s by the North American Soccer League, which I think laid down the roots, the taproots which we see today … It’s really magnificent but it lacks – I don’t think there’s enough recognition given to the North American Soccer League, what they accomplished, starting the fires, igniting the interest in soccer.”

Stunning, sexy, fabulously flawed and devastatingly doomed all at once, the NASL showed us both the best- and worst-case scenarios for soccer in North America. MLS’s founders saw it as a case study in what not to do, taking pains to avoid treading a similar path – only to find fans, competitors and even their own member clubs drawn to those glory days like moths to flame. Purists extol the legacy of the 1950 World Cup team that shocked the world. Yet relatively few kids of today even recognize names like Gaetjens, Keough, and Bahr, let alone their faces.

A game eternally labeled as this country’s sport of the future continues to wrestle with the ghosts of its past. Schiano’s old friend Joe Sirianni, the Lancers’ trainer, equipment manager and longest-serving employee, wistfully summed up this awkwardness between yesterday and tomorrow in American soccer.

“It’s a beautiful building, but a building’s always a building,” said Sirianni of the new Hall. “Oneonta contained a lot of memorabilia, a lot of history, but really where soccer was, not what soccer is today…. It’s a beautiful building, state of the art, all the sophistication and technology of today, but today we’re celebrating 50 years of history and the history is not here. So that’s my views.”

Some in attendance suggested that a Hall of Fame located inside an MLS venue could never pay full and fitting tribute to the NASL. Others took the more pragmatic view that this was the best-case scenario after so many years with no Hall at all. In the end, the project in Frisco, which reportedly ran some $16 million over budget, became a reality because of the Hunt family, owners of FCD as well as the descendants of leading NASL investor Lamar Hunt. Few organizations in modern American soccer can claim such close ties to both the old days and the present state of things.

The Hall of Fame itself will probably evolve, too. It’s said that there’s far more memorabilia still in storage in Soccer.com’s North Carolina warehouses than there is room to display it in the relatively compact dimensions in Frisco. Maybe even the most obscure corners of our game’s history will get their turn in the spotlight, and not be completely overshadowed by the VR penalty-kick games and design-your-own-jersey activities.

Hopefully, the rest of us can soak up a few more colorful tales and lessons from the NASL generation before they too fade into memory.

“The 50th reunion is of people who’ve given their lives to try to help young people fall in love with the game of soccer,” said Rote. “It’s not just about playing, it’s also about being a missionary for the game of soccer to the local communities… that’s very satisfying. That’s a great part of why I’m here.”