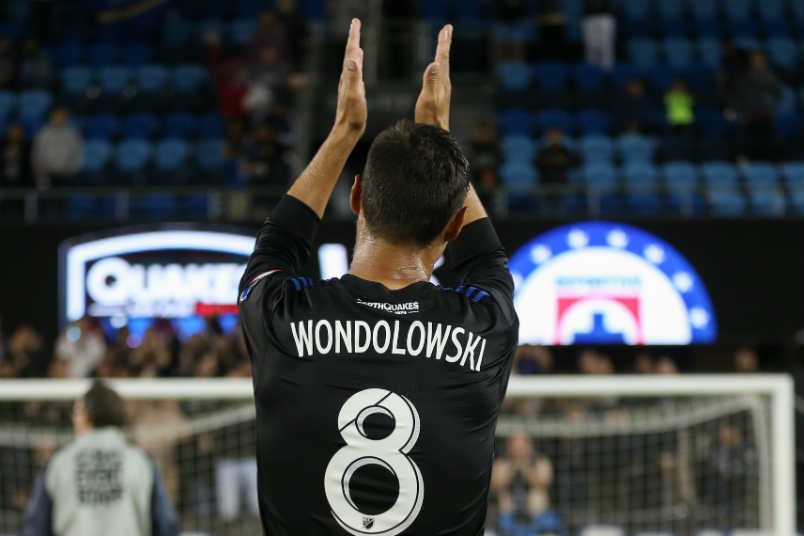 By Luis Bueno – RIVERSIDE, CA (Oct 10, 2018) US Soccer Players – The San Jose Earthquakes have, if nothing else, been a predictable club. Since the Earthquakes’ resurrection in 2008, the team has delved back to its early days to try and plow forward. Frank Yallop and Dominic Kinnear each returned to the club to coach the team as did former player Chris Leitch. So it comes as a surprise then that it is this same club that has made what could be one of the most significant coaching hires in league history.

In hiring Matias Almeyda, San Jose became just the second MLS club to hire a coach directly from Liga MX. If Almeyda succeeds, it could open the door for other Liga MX coaches to consider MLS as a viable option. More coaches from Liga MX would not only continue to add to the league’s standing. It could also help bring in different kinds of players into the league and perhaps make for a better product than the one that exists now.

The relationship between MLS and Liga MX is not as strong as it should be. At the corporate level, it is and has been solid for years, with the leagues putting together competitions featuring teams from both sides. Physically the leagues are very close to one another. The distances could not be further apart when it comes to player movement.

Liga MX supporters have long considered MLS a third-rate league. That negativity has also long permeated to the media and likely to Liga MX players themselves.

From the end of last season, only ten players have moved from Liga MX to MLS. To put that in perspective, seven players from the Venezuelan league joined MLS in that same time span. MLS is just not a draw for Liga MX players, whether those players are Mexican or not.

Now, it is to some. Raul Ruidiaz was a standout with Morelia, scoring 39 goals in four seasons there and helping the club avoid relegation. After representing Peru in the World Cup last summer, Ruidiaz left Morelia for Seattle, a move which helped the Sounders’ tremendously. He has seven goals in 12 games, one off the team lead. Seattle has climbed into the playoff race with him aboard.

Ruidiaz is the exception to the Liga MX player movement. Players like Edgar Castillo (Monterrey to Colorado) and Jorge Villfana (Santos to Portland) are the norm. Both are USMNT players who either started in Liga MX or moved there from MLS and eventually returned. There have been rumors linking Liga MX stars to MLS, such as Andre-Pierre Gignac and Dario Benedetto, but often those rumors amount to nothing.

Where player movement between the two leagues is sparse, coach movement is nonexistent. Only three coaches have gone directly from a Liga MX gig to an MLS job, Hans Westerhof, Jose Luis “Guero” Real, and Jose Luis “Chelís” Sanchez Sola. All three of those coaches joined Chivas USA after coaching in Mexico, but the club had a direct line down south. San Jose has no such connection.

San Jose is a team that reaches into its past and inches forward into the future. The team’s scouting department brings in more busts than anything and lately the coaching job has featured a revolving door. Somehow the San Jose job appealed to Almeyda.

Reportedly, Almeyda had interest from clubs in Mexico, Argentina, and Uruguay, among others. Few would have second-guessed any such move. Almeyda also at one time had a keen interest in guiding the Mexican national team.

Almeyda has accomplished great things in his career, both as a player and coach. Almeyda spent the better part of a decade playing in Europe, most of that time in Italy with clubs like Lazio and Parma, and also played for Argentina in the 1998 and 2002 World Cups. After his playing days ended, Almeyda got into coaching. He coached in Argentina at River Plate and helped the storied club gain promotion back to the top flight in 2012.

HIs task in Liga MX could not have been more demanding. Club Deportivo Guadalajara had long ago been the dominant side in Mexico. The shine had been gone from the trophy case long ago. Chivas had won 11 Mexican league titles, but the 11th came in 2006. The 12th did not appear anywhere close when Almeyda took over the reins in 2015. In fact, Chivas was battling relegation at that time.

Almeyda worked some magic though. He won the Copa MX title in the Apertura 2015 season, the club’s only trophy of any kind since winning the league in Clausura 2006. Almeyda won the double in the Clausura 2017, winning Copa MX and the elusive league title as well. Last spring, Almeyda led Chivas to the Concacaf Champions League title, besting Toronto FC in a dramatic series decided on penalty kicks.

He left the club in the summer due to differences with the front office. Almeyda remained on the job for three months shy of three years, the longest tenure of any Chivas coach since Ricardo “Tuca” Ferretti spent four years from 1996-2000 with the club.

If Almeyda enjoys resurrection projects, then he picked the right club. San Jose has won two MLS Cups but has not been relevant since the team rejoined MLS in 2008 after the original club moved to Houston. San Jose has made the playoffs three times since 2008. Its 2017 venture was a one-and-done appearance in the knockout round.

Yet, San Jose managed to make this attractive hire that can have ramifications for its own team as well as the entire league. Almeyda could create a pipeline of talent from Guadalajara and Liga MX to San Jose. It is only natural for a coach to bring in players he knows. Perhaps more interesting is the potential for something that the Mexican-only Chivas would never allow him to do. He could bring in players from Argentina and the rest of South America.

Almeyda’s compatriot, Gerardo “Tata” Martino, has impressed with Atlanta United. Martino has brought in outstanding talent from across Latin America. The team is in line to win the Supporters’ Shield. Perhaps Almeyda could put together a similar squad and bring an attractive and winning style of soccer to Avaya Stadium.

If all goes well for Almeyda in San Jose, he could become a bit of a trailblazer. Success in MLS might lead others here. It might force MLS teams to take a longer look south for coaching vacancies.

San Jose interim manager Steve Ralston will stay aboard for the Quakes’ final two games, meaning Almeyda will not make his debut until 2019. While the league limits its postseason awards to players, Almeyda should, if his previous form continues, easily walk away with the league’s 2019 Newcomer of the Year Award.