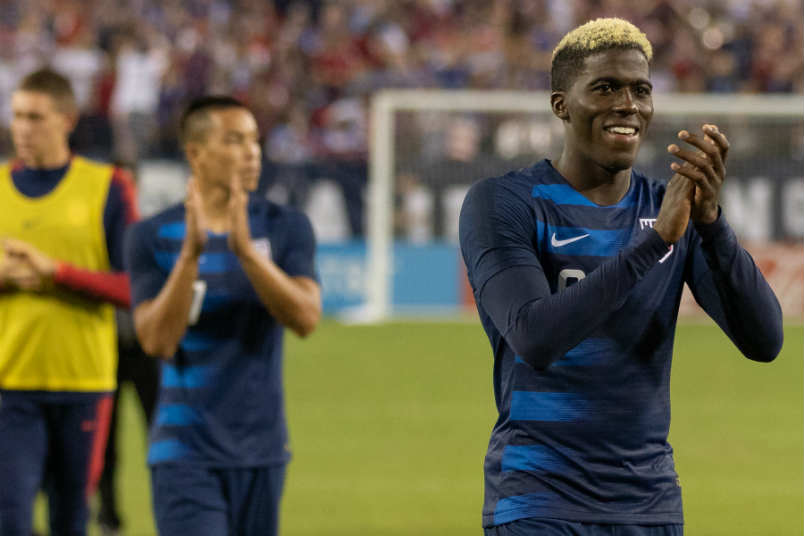 By Clemente Lisi – NEW YORK, NY (Oct 1, 2018) US Soccer Players – Columbus Crew striker Gyasi Zardes is having a wonderful season. Fourth overall in scoring in MLS, the 27-year-old striker is hoping to lead the Crew to an MLS title as well as become a USMNT regular again. He’s made a strong case for both as the once-promising prospect has slowly started to live up to his potential.

Zardes played college soccer at CSU Bakersfield and later signed with the US Soccer Development Academy for the LA Galaxy’s Under-18 team starting in 2008. He moved up to the Galaxy U-20s and competed in the USL Super-20, leading the team to the national title in 2010. Ahead of the 2013 season, he signed with the Galaxy as a Homegrown Player and made his MLS debut the following season. In December 2014, Zardes became the first Homegrown Player to score in an MLS Cup Final, helping the Galaxy to a fifth MLS Cup against the New England Revolution.

The California native made his National Team debut in 2015 after scoring 19 goals in all competitions the previous season. Zardes scored his first USMNT goal on June 5, 2015, in a friendly against the Netherlands. Zardes took part in the Gold Cup that summer and the 2016 Copa America Centenario, going on to earn 40 caps and score six goals at senior international level. He was also part of the US team that won the Gold Cup in 2017. Zardes took part in the USA’s two friendlies last month, a 2-0 loss to Brazil and 1-0 win against Mexico.

Earlier this year, the Galaxy traded Zardes to the Columbus Crew. In LA, Zardes had been used primarily as a winger and at right back. In Columbus, coach Gregg Berhalter has deployed him as a lone striker, and it’s paid off for both of them. Zardes has tallied 16 regular-season goals as we enter the final month of the season, putting him fourth overall on the list of league top scorers. At the same time, the Crew are playoff-bound and emerged as one of the toughest teams in the Eastern Conference.

“Right from the beginning he showed what he can bring. He embraced the way we play. He embraced his teammates. And they did the same,” Berhalter told the Los Angeles Times. “They became close very quickly. And he’s a great guy. I think that’s the important side of it. He really wants to learn. He wants to improve. He’s always trying to get better and he has a tremendous work ethic in doing so.”

We recently talked with Zardes about the current season, his time with the National Team and what’s next for him.

You are having a great season in MLS and got back on the National Team. How do you feel about your form this season?

I think it’s great. I’m scoring goals for my club and playing in my more natural position. I always told myself that if I play extremely hard for my club that I would have another opportunity to represent my country.

Similarly, your Columbus teammate Zack Steffen has been playing well for both the Crew and starting for the National Team. How would you assess his performances lately?

I think Steffen is playing extremely well at the moments for both club and by representing his country. He’s a great ‘keeper and I’m always going to back him.

The National Team has changed since you last played on it. What has it been like to play alongside youngsters such as Tim Weah, Weston McKennie and Tyler Adams?

I think it has been great playing with the younger generation. They bring a lot of energy, they are very creative and they have nothing to lose. It’s been a great opportunity to come into camp and get to know those guys.

Against Brazil, you and your teammates had a chance to test yourselves. What was that like?

(Brazil) keep the ball extremely well, so I just tried to bring my energy to the game, but they just kept the ball and kept it rotating. After giving up that first goal we got ourselves back in it. We had a couple of opportunities. We never put our head down and kept working hard for each other. I think that’s great moving forward.

What do you take from the Brazil and Mexico games?

I think we learned a lot. We have to just keep progressing as a team and a unit.

The Mexico game was emotional, both because they are the biggest US rivals and the game was played on 9/11. What were the days leading up to that game like for you and the team?

We got to visit the Freedom Tower and be able to experience that. September 11 means a lot to our country and I think that was the biggest thing about our trip. It means a lot to represent this country and wear this badge and Mexico is one of our biggest opponents and rivals.