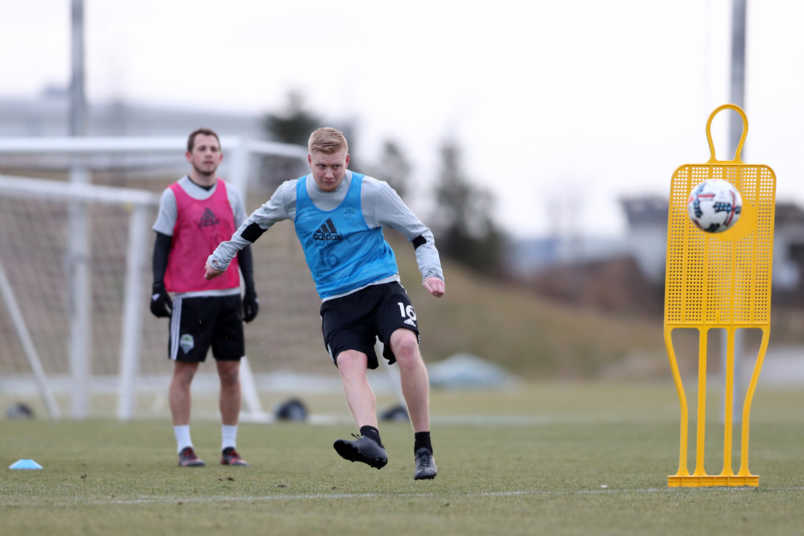 By Charles Boehm – WASHINGTON, DC (Oct 15, 2018) US Soccer Players – There’s one obvious problem North American soccer faces when it comes to identifying and developing players. It’s the sheer size and scope of the United States and Canada. These are the second- and third-largest countries on earth, with a combined population of more than 360 million. Somewhere in the neighborhood of 30 million of them play soccer, maybe more.

Enormous swathes of both nations have little to no professional soccer presence nearby. Stories abound of talented young players driving hours every day to pursue their dreams of high-level play. It’s also no secret that the soccer pyramid here is incomplete and inefficient compared to other nations.

Players and their families have to navigate a winding, chaotic path towards the top. For all its stability and growth, MLS struggles to scout the domestic landscape completely, often finding diamonds in the rough too late or not at all. Some say the same of the US Soccer Federation even after a decade-plus of heavy investment in its Development Academy and other youth initiatives. Matt Martin and Scott Rezendes think they can offer some solutions.

Longtime scouts and soccer executives with a decade’s worth of experience each in MLS, USL, and beyond, the duo launched The Soccer Syndicate in late August. It’s an ambitious startup aiming to build and commodify a comprehensive network of scouts and scouting information and offer its use to clients at all levels of the pyramid, both at home and abroad.

The Soccer Syndicate wants to connect aspiring players with clubs, schools, and other destinations that can help them make the most of their abilities. The goal is to make the evaluation process simpler and more efficient for the clubs.

“Our job is to identify a player and say ‘this is where this player is now, this is what we project their ceiling to be,’ and then funneling that information to clients that we think could utilize that player to give them an opportunity to improve themselves,” explained Rezendes in a recent conversation with USSoccerPlayers.com. “We hope to be part of the solution in terms of making sure that players have opportunities, players are being seen, information is being cultivated,” he added. “I think more so than doing the work is taking the information we gather and framing it in such a way that clubs can digest.”

Starting with a core group of trusted talent evaluators, the new company has already inked a deal with one leading MLS academy and two non-MLS clubs in the Development Academy, They’re also close to agreeing to terms with European and Canadian clients. They hope to compile a database offering detailed and manageable info from across the youth, college, semi-pro, and professional ranks.

The plan is for expertise, technology, and user interface to dovetail harmoniously in a way that makes the syndicate a must for anyone seeking an edge in the modern arms race for prospects. Another way to think about it: Doing for scouting what Apple did for the phone.

“Think of the whole soccer landscape as like this giant network – but it’s not a steady flow,” explained Martin with a chuckle in a July appearance on TopDrawerSoccer.com’s podcast. “So you have to kind of picture a spider on drugs. It doesn’t spiral out, you’ve got to zigzag and zigzag and you get knocked off the web once in a while. You’ve got to jump back in there and keep going, because there’s a connection. You can get from one end to the other. You can drill down and find a great player and get him in a good position to succeed and develop. But it doesn’t happen directly.”

Even as player development has climbed up the league’s priority list, MLS remains spotty in terms of the investment and acuity of clubs’ scouting apparatus. Many lower-division clubs can barely afford to hire full-time technical directors, much less scouts. With their voluminous database, what Martin calls “the real secret sauce”, and network of contacts, those running The Soccer Syndicate believe they can change that paradigm for the better.

“With the country being as big as it is,” said Rezendes, “the costs for scouting are largely travel. As much as where the salaries are going to need to be one day to really keep people invested and doing this full-time, in the modern day, for most of the past 10 years, most investment in scouting and the scouting networks that have been built piece by piece in this country by some of the clubs is mostly paid [toward] expenses and travel in their area, with small stipends. So we always envisioned, what’s the best way to strip away as much of the travel? It’s to have scouts embedded in each market, where the talent comes to play.”

Rezendes helped launch the MLS Players Association in 2006 before moving on to various scouting and technical posts at Sporting Kansas City and USL sides Wilmington Hammerheads and Oklahoma City Energy FC. Martin has scouted for the New York Red Bulls, Sporting KC, the Portland Timbers, and MLS itself. Along the way, he earned the trust of the likes of Jeff Agoos, Peter Vermes, and Caleb Porter by spotting future pros like Omar Gonzalez, Ike Opara, and Zac MacMath.

Both have always believed that many American and Canadian players are capable of going toe to toe with their elite counterparts in the rest of the world. The problem has typically been spotting them, evaluating them accurately, and moving them into top developmental environments quickly enough for them to have a chance at making that leap.

“We [as a country] have not scouted as well as we need to,” Martin told TopDrawerSoccer’s Travis Clark. “It is a part of the problem in US soccer, with why we did not qualify [for the 2018 World Cup]. And Bruce Arena would support me in the following – and that is, we are not developing players as fast as we need to, or as thoroughly as we need to, to compete where we should be competing…. “I think everybody agrees that the raw lumber out here is really good and we are building something. It’s not like every effort that we make is folly. But it all needs improvement, from the scouting to how players develop.” With clubs around the world finally waking up to the enormous potential within the North American scene, they see myriad possibilities in the years ahead, especially as blue-chip youth prospects become more and more of a commodity. “There are national-team players right now in the Under-17 group who need and are seeking pro opportunities,” Martin said, “but what they don’t want to do is be tied to a [MLS] contract that leaves them, let’s be honest, on $65,000 [per year] four years from now. So I think you’re going to see some very interesting stuff in the next couple of years – a non-MLS-affiliated USL team with three Under-18 national-team players on it, and then selling two or three of them on to Europe, because they can.”

It helps their cause that more potential customers come online every year. Beyond MLS expansion and colonizers from abroad, USL has grown rapidly over the past half-decade and will launch its new third division next year. The new Canadian Premier League is also tracking for a 2019 debut, and The Soccer Syndicate aims to service it with a big push into that country’s soccer ecosystem.

Notably, Martin and Rezendes are confident that they can build a presence in the toughest frontier in the North American game: The regions outside major metro areas, whether the rural interior or other parts of the soccer periphery.

“The goal here is to conquer the massive size of this country,” said Martin, “and then also as a company, leverage it to our advantage. Because we are going to find some special kids in some out-of-the-way places.”