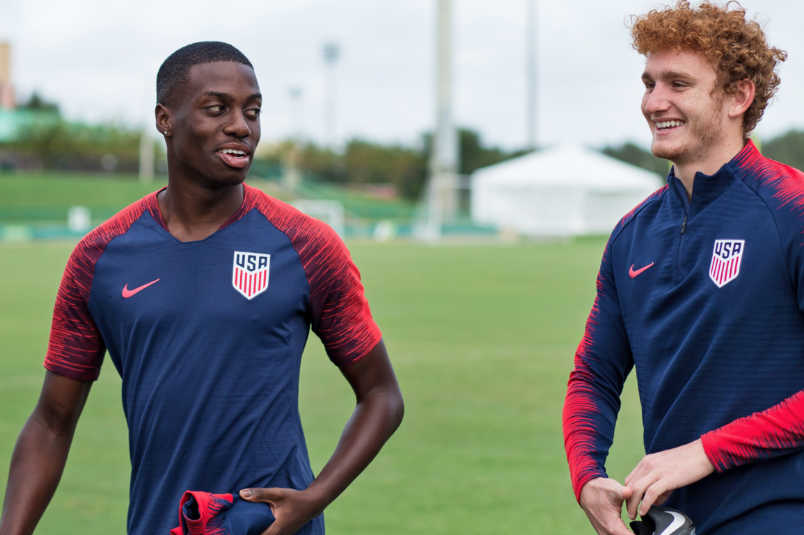 By Charles Boehm – WASHINGTON, DC (Oct 19, 2018) US Soccer Players – The USMNT has wrapped up their October camp with players returning to their clubs after a 4-2 loss to Colombia and Tuesday’s 1-1 draw with Peru. It’s been a useful international window, despite the lack of victories in match play.

Several youngsters and newcomers earned their debuts and/or their first starts for the national team, including Jonathan Amon, Reggie Cannon, Aaron Long, and Josh Sargent. All stepped up to the challenge in fine style, making light of their relative lack of experience. We witnessed some promising performances against stiff competition, including some truly enjoyable moments of chemistry and interplay.

Both Peru and Colombia tested the Americans with their creativity, movement, speed of play, and selective use of pressing. All that CONMEBOL quality exposed the USMNT at times, most notably in Colombia’s devastating second-half surge after the US had rallied to take the lead. It was a reminder of the cutthroat excellence that awaits the program as it climbs back towards the world’s elite.

Against Peru, it was easier to detect the young Yanks coming to grips with the challenge in real time. Pushed onto the back foot for significant stretches of the game in East Hartford, Connecticut, the squad knuckled down and looked to play through the pressure, growing in confidence as the game unfolded. We saw flashes of technique, composure, and even flair under duress. The likes of Sargent, Cannon, Will Trapp, and Tim Weah were literally learning before our eyes. The gut punch of Peru’s late equalizer should not obscure that encouraging sight.

Many surmise that this will prove to be caretaker coach Dave Sarachan’s last camp in charge of the program. That’s according to the rough timetable general manager Earnie Stewart has laid out for the process of selecting a new head coach, an appointment that could come as soon as November 1. Regardless of who’s running the show when the squad reconvenes in Europe next month, the next steps for this group of young talent are hugely important.

Put simply, player development is a process of upward growth in increasingly difficult settings. Players prove their ability at one level and advance to a higher one that poses new challenges and lessons. The best keep climbing in this manner until they’ve reached their peak. As former USMNT coach Jurgen Klinsmann liked to emphasize, there’s almost always another level.

The heavy lifting of this process usually takes place in the day-to-day club environment. National team coaches have limited time with their squads, and thus relatively few opportunities to foster individual breakthroughs. A player like Sargent, who has yet to make his first-team debut at Werder Bremen, should excel at his club before he can become a USMNT regular.

This works as a general rule of thumb. All national teams should be meritocracies in some basic way. The problem for the USMNT is that its rising crop of young talent requires more nuanced handling and adept collaboration between Sarachan’s staff and whoever replaces them. For the players who impressed on US duty this month, and in earlier camps this year, the next rung on the ladder must be clear and reachable, regardless of what they’re encountering at their clubs. Failing to do so risks stunting or sidetracking their progress.

I recently discussed this concept with Keith Costigan, who’s experienced it from multiple angles in his roles as a coach, television commentator, and talent scout. Nurturing young prospects along this upward trajectory is pivotal in this game. All too often, US coaches and systems don’t deliver it for kids.

Over the past several years we’ve seen a pathway constructed from US Soccer Development Academy play to USL to MLS. That’s an improvement on the previous status quo, though even the most forward-looking MLS organizations aren’t always using it to maximum effect. Costigan pointed to the examples of some highly talented prospects in his home state of California – we’ll keep them nameless here – who stagnated in the absence of that steady progression.

“I scouted him at the academy level, and he was regressing at the academy level, because he was bored with it – he was done with it,” he said of one such player. “He should be playing USL – you sign him to a contract, put him there every single day. I think that’s important. So now when he’s doing well there, the next step would be put him in the first team, and if they don’t do that, sometimes they can regress… If you miss that window, sometimes the players can regress and not live up to the potential they have at 16, 17, 18. So that’s something we have to be really, really wary of and worry about as we move forward.”

Playing top competition like Colombia and Peru at this juncture is highly useful for the USMNT because it puts players in just the sort of crucible that fosters honest evaluation. I was one of many observers left encouraged by the exciting glimpses of potential from the youngest and least experienced members of the squad this month. They’ve earned the chance for more minutes. Leadership’s next moves, though, are vitally important. Onward to November’s meetings with England and Italy.