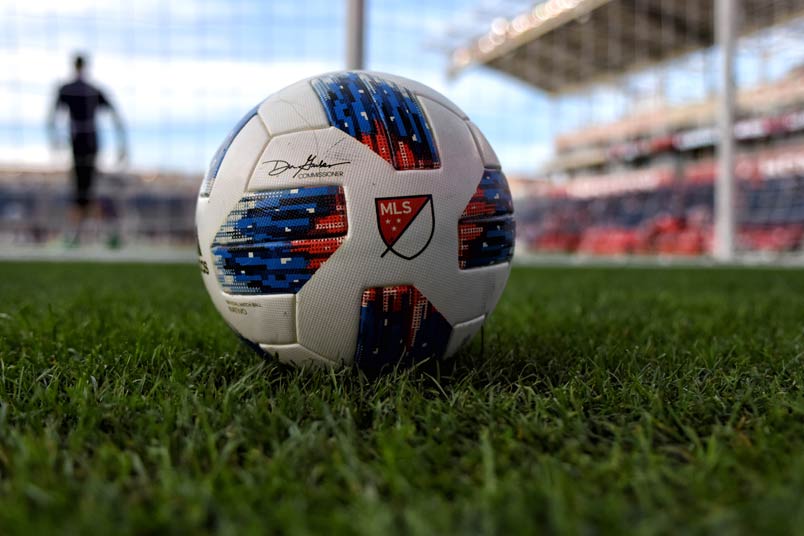 By Jason Davis – WASHINGTON DC (Nov 7, 2018) US Soccer Players – Halftime of the conference semifinals in Major League Soccer’s 2018 playoff season means taking stock of a number of areas on the way to the deciding second-legs. Since no first-leg delivered a multi-goal win for any team, there’s plenty of drama packed into every matchup on the board.

That doesn’t mean that a few of the final eight aren’t in advantageous positions, or that their opponents don’t have a lot of work to do in the second-leg. These series are all about game state, even if the “game” plays out across two distinct 90 minutes periods.

Game state is shorthand for the idea of how score and time impact the choices made by coaches and players. In a 90 minute knockout game, the team with the lead is less likely to push forward for another goal. An early lead can shift tactics as coaches either attempt to make a lead stand up or fight desperately to come back.

No one wants to be chasing the game, especially if the opening leg of the series happened in your own building. Taking a deficit into the second-leg on the road means playing risky soccer in a bid to get back into the series. Because MLS uses the away goals tiebreaker, even a single goal can feel like a massive hill to climb.

Chasing the game is exactly what NYCFC will be doing when they kickoff against Atlanta in at Mercedes-Benz Stadium on Sunday afternoon. The New Yorkers are down 1-0 to United after the opening leg in the Bronx. Tata Martino’s opting against building from the back in favor of a more direct approach paid obvious dividends. If not for a VAR reversal on offside grounds of a second goal, Dome Torrent’s team would be in an even deeper hole this weekend.

As bad as losing at home might have been for NYCFC, there is a silver lining and that’s clarity. For NYCFC, the mission in Atlanta is to simply win. A 1-0 win in 90 minutes would mean playing extra time and potentially, penalties. Do better than that, and they’re through to the finals.

The game state dictates that NYCFC has to go for it, for lack of a better description of the likely tactics. Torrent’s club is not defensive by nature anyway, but the situation means there’s no use in holding anything in reserve. The psychology of the day mean that NYCFC might not be wildly aggressive to start the match, but as time ticks down they’ll have no other choice.

The danger for NYCFC lies in opening up too much and giving Atlanta space to attack. If United grabs the first goal, the chances will be higher for a blowout than for a City comeback. That’s a commentary on Atlanta’s ability to hit hard on the counterattack and punish teams who get stretched out at the back.

While NYCFC was previously extremely tough to beat at home, the larger expanse of the field at Mercedes-Benz Field aids the attacking game they’ll need to play. As is so often the case, NYCFC is going to need an imperious performance from their goalkeeper to have a realistic shot to overturn their deficit. Sean Johnson is certainly capable.

The game state in the East’s other conference semifinal means that’s it the home team that needs to score. New York fell to Columbus 1-0 at MAPFRE Stadium, putting the Supporters’ Shield winner in a must-score position at Red Bull Arena on Sunday. It took some heroics from Zack Steffen to keep New York off the board, and there’s plenty of danger in the attack for the top seed.

Colombus coach Gregg Berhalter’s choice to sit both Federico Higuain and Pedro Santos for the first half paid off. Both of those key attacking players will be fresher for it in the second-leg.

The Red Bulls will stick to what they do best, pressing the ball and attempting to find the likes of Bradley Wright-Phillips close to goal. The longer Columbus keeps New York off the board, the higher the press will move and the more desperate things will get for the home team. The Crew probably won’t get too adventurous on the attacking end, but has the threat of Higuain and red-hot Gyasi Zardes, the lone goalscorer from the first leg.

Columbus will always make it difficult on opponents, a function of Berhalter’s dedicated game-planning. The Crew thrives in the wide areas of the field when they have the ball. They’re coming off of a confidence-building run of two playoff games where they limited Luciano Acosta, Wayne Rooney, and Bradley Wright-Phillips to a combined two shots on goal. Possessing the ball won’t be necessary for Columbus to executing whatever strategy Berhalter puts in place.

Only one series in the conference semifinal round is level on aggregate. Sporting Kansas City’s equalizer from Diego Rubio in the 60th minute swung the advantage back to the higher seed with the second-leg to come on Sunday in Kansas City. Sporting had just 33% possession at Rio Tinto Stadium. That’s a stunning number for one of the league’s best possession teams. It shows coach Peter Vermes’s desire to limit Real Salt Lake’s chances rather than chase a lead on the road.

Rubio’s goal, off a mistake by the usually reliable with distribution Nick Rimando, forces RSL’s hand in the second-leg. A goalless draw won’t do since Sporting has the advantage of the tiebreaker via the away goal. Sporting probably won’t cede control of the ball as they did in Utah, though they don’t have as much impetus to use it as do the visitors.

A Sporting goal changes little for RSL, who will need just a goal to bring the series level and force extra time. If RSL scores first, Sporting’s attack will become the focus with the tiebreak advantage wiped out.

Portland’s 2-1 win at home over the Sounders is far from perfect from the Timbers’ perspective. Allowing the Sounders to score puts significant pressure on a defense that can be shaky at times. Seattle’s ability to salvage something in Portland comes despite key players Chad Marshall and Cristian Roldan forced off before halftime with injuries.

Marshall underwent surgery on Tuesday, ensuring he’ll miss the second-leg and forcing Brian Schmetzer to turn back to Roman Torres to partner with Kim Kee-Hee. Torres was dropped in favor of the more mobile Kim after the former returned from the World Cup. Torres’s greater propensity for getting caught out of position is something Portland will look to target through the quickness of Jeremy Ebobisse and guile of Diego Valeri.

The Timbers don’t need goals, but one might be enough to see out the series. Canceling out the Sounders road goal and taking a 3-1 lead would force a full press for goals from home and while Seattle is certainly capable of scoring the necessary goals, Portland’s excellent counterattack would benefit from the opportunities such an approach would provide.

It’s anyone’s guess how much the quick turnaround from Sunday to Thursday might impact the Timbers. What was thought to be an advantage for the Sounders, who had a bye into the conference semifinal round, might be a problem.