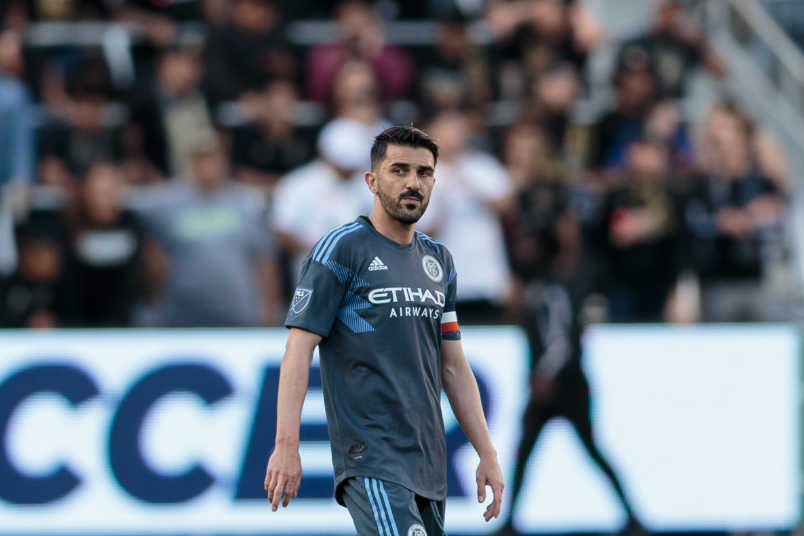 By Jason Davis – WASHINGTON DC (Nov 14, 2018) US Soccer Players – How do you know when it’s the right time to say goodbye? That’s the question NYCFC faces as the weather turns cold and the club contemplates preparations for 2019. Sunday’s loss to Atlanta United in the Eastern Conference semifinals means the clock is now ticking on difficult decisions for next year. That includes the face of their franchise.

The player most identified with NYCFC is Spanish forward David Villa. Villa’s move to New York coincided with the launch of the team and with the arrivals of two other famous European stars, Frank Lampard and Andrea Pirlo. That Villa is the only one of the trio still playing for the club speaks to Villa’s ability, even deep into his 30s. It also speaks to his commitment.

From the beginning, Villa laid waste to the stereotype of the “aging European star chasing one more big check in America.” The first player ever signed by the expansion team, Villa understood his role to be one of both leading player and dedicated ambassador. He did numerous appearances, learning English quickly to better represent NYCFC, in addition to his work on the field.

NYCFC sent Villa on loan to fellow City Football Group outfit Melbourne City for a slightly strange four-game stint, then made him captain of the team for the inaugural MLS campaign. While Lampard was squeezing out another few months at the Premier League level with a post-signing loan to Manchester City, Villa was doing the work in the US. That included

Villa’s performance on the field lived up to the hype and to his extravagant salary. He scored 18 goals and provided eight assists in his first MLS season, leading the team in scoring under head coach Jason Kreis.

2016 was even better. Villa scored 23 goals and provided four assists, good enough to win the league’s Most Valuable Player Award. NYCFC fortunes improved with Patrick Vieira taking over for Kreis and the club made the playoffs for the first time.

The future, at least on the field, looked bright. Though 34, Villa became the beating heart of NYCFC. Despite a humbling 7-0 aggregate loss to Toronto FC in the playoffs, there was plenty of reason to believe NYCFC could compete for a championship in 2017.

NYCFC again topped out at the conference semifinal stage that year, crashing out against Columbus over two legs. Villa’s standard remained high, scoring 22 goals and becoming the first player in MLS history to record back-to-back 20+ goal season. If a drop-off was coming it wasn’t evident in 2017.

Things changed this season. Villa missed more than a dozen games due to injuries, impacting his production. His 14 goals in 1,754 minutes translate to a 0.71 goals-per-90-minutes average, good enough to keep him in the elite of the league’s goal scorers. That number is better than that of Bradley Wright-Phillips, Wayne Rooney, and Gyasi Zardes. When he’s on the field, Villa remains a significant goal-scoring threat and elevates the play of NYCFC.

Still, the question facing the club is about more than Villa’s numbers. There’s always a chance that at 36, Villa will hit the wall a suddenness that would put NYCFC in a difficult position. If Villa can’t make it through the whole of 2019, or lands on the bench with a hefty DP contract, it would limit the club’s ability to compete.

Villa did not speak with reporters in Atlanta following NYCFC’s playoff exit. He slipped away quietly, perhaps for the final time as a member of the club he helped launch. If that was the end for Villa, it wasn’t a fitting one.

NYCFC’s calculus is about production, potential injury, and the ravages of age on an athlete’s body. If those were the only considerations, there might not be much to think about. Even if Villa left and scored 15 goals for another MLS team in 2019, the practical decision at the end of a contract is to say goodbye. Unfortunately, the calculus also includes elements of the club’s ability to sell tickets, the uncertainty with its head coach, and a debate over signing policy as the league changes.

NYCFC’s situation might not seem so ominous if they’d gone a round deeper in 2018. Vieira’s replacement as coach, Dome Torrent, needed time to get a grip on this league. NYCFC didn’t slip far, but they certainly slipped. Then there are the big picture issues. The club has seen attendance decreases every year since their inaugural season. They head into 2019 with leadership yet to win the benefit of the doubt from fans. The stadium problem looms large.

Without Villa, the most marketable player they have, NYCFC could be looking an even more drastic regression in interest next season. Keeping him might help the receipts, depending on his salary. Letting him go might be the better choice for the long term.

The reality for NYCFC is that there’s probably nothing the club can do to stem the tide of dropping attendance that doesn’t involve a Villa-level signing. Throwing money at the problem could work, but it might mean taking the focus off of becoming something more. In this era of MLS, that’s a business and sporting decision.