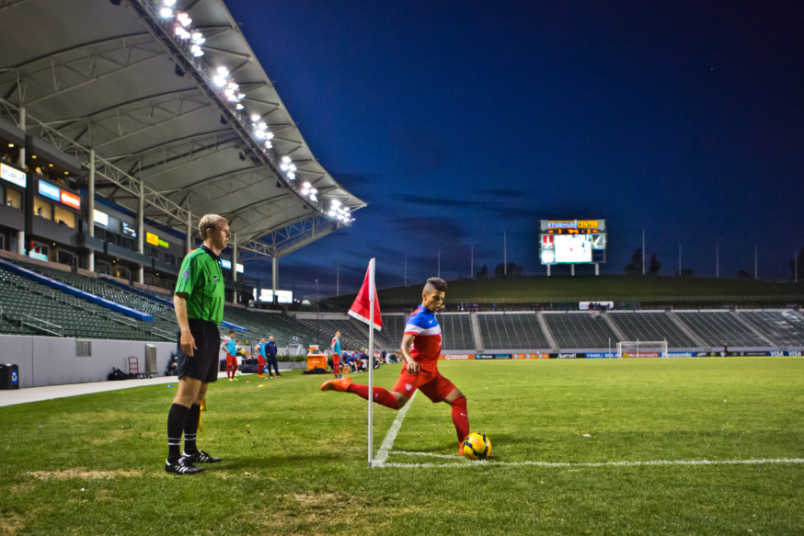 By Charles Boehm – WASHINGTON, DC (Nov 8, 2018) US Soccer Players – Sometimes resumes and backstories prove to be Rorschach tests for readers. One observer might look at a long list of previous employers and wide-ranging destinations and see instability, perhaps challenges settling in. Others eye the same bullet points and see ambition, drive, enterprise or a useful restlessness.

This often takes place in soccer. Players and coaches alike can find success via both stability and wanderlust. Or, as is most often the case, an artful blending of both instincts. The USMNT’s newest call-up offers just such a situation to consider this month.

Romain Gall got his first-ever senior call-up for the USMNT’s upcoming friendlies against England and Italy, the sole uncapped member of Dave Sarachan’s 28-player squad. It’s a particularly inviting opportunity for the 23-year-old Malmo winger on several levels, and certainly hard-earned.

Born in Paris and raised in Northern Virginia after his family relocated when he was 7, Gall has racked up ample mileage in his pursuit of his professional soccer dreams. He turned heads in the Herndon Youth Soccer organization and caught on with DC United’s youth system, “playing up” in age on their top Under-17 team, at the time a side competing for national honors. He then left home at 15 to move out west, joining Real Salt Lake’s residential academy as that club began to set the MLS standard for investment and ambition on the talent development front.

A year later Gall was on the move again, returning to France to join FC Lorient. By now a recognized member of the US youth national teams pool, he’d earned a scholarship slot at the University of Maryland’s elite NCAA program. The pro route was always his first choice. Gall went on to spend a few years climbing the ranks at the then-Ligue 1 club. It was back across the Atlantic in the summer of 2014, signing with MLS via the allocation lottery system used for youth internationals and getting assigned to the Columbus Crew.

If Gall hadn’t already hit a few speed bumps on his road to the top, he definitely encountered one or two in Ohio. After a few appearances in his first season, he drifted well down the depth chart. As Columbus made a run to the 2015 MLS Cup final, Gall went out on loan to the USL’s Austin Aztex. He played nary a minute in MLS the following year, even while the Crew slumped to a playoff-less campaign. Columbus waived call before the start of the 2016 season.

“I never doubted my capabilities just because I wasn’t playing,” Gall told The Athletic in September. “I always had that confidence to know that I was good enough. I just needed to be in the right environment, which was one where I played games.”

“I’m not too pleased with how that ended up,” Crew sporting director and head coach Gregg Berhalter said at the time. “I thought he had potential. We just weren’t able to get it out of him, in terms of how he was going to fit in our system. Part of that is coaching, and we’ll take responsibility for that. But I thought there was a lot to work with, and I’m just a little bit disappointed with how it ended up.”

Taking some advice from his agent, Remy Cherin, Gall signed with Nykopings, a club in Sweden’s third tier, the following month. Though perhaps a humbling locale, there was an American coach named Brian Clarhaut on the technical staff and regular playing time was in the offing, a potential gateway to bigger and brighter stages.

“It definitely took some convincing,” Gall told Goal.com’s Ives Galarcep earlier this year. “Coming from the Columbus Crew, an MLS club, and also the national team, and then going down to the third division was a tough decision…. At the time this was kind of the only option that I had to take, that I could take. I kind of put my head down and I was like, ‘I need to get playing time, consistent playing time’, and this was the best move at the time.”

Gall made the most of it. Scoring goals and delivering quality service with regularity, he rose first to GIF Sundsvall, then earlier this year transferred to Swedish heavyweights Malmo. There, Europa League action has provided priceless experience and exposure among the continent’s elite. Now a USMNT call has extended another opportunity, perhaps leading to even more illustrious places.

Depending on how he adapts to this new level, this month’s US camp could be a challenge for both the player and his coaches. Comparing USMNT players across leagues, nations, and particular individual circumstances seems to be nearly as much art as science. Sweden and its Nordic neighbors have welcomed many American players over the decades, some staying for long periods, others passing through on their way to other European competitions. How does it compare to England, Germany, and MLS? Can Gall translate his fluid, creative style in a tougher environment? US coaches have racked their brains over such questions throughout this century.

Gall should benefit from the USMNT’s current need for dangerous attacking players. He looks like a good bet for a wide role. He’s shown particular comfort and skill as a left winger cutting inside to shoot and create with his right foot. Thanks to his career with the YNTs, he might also be more familiar to his US teammates than fans. How much of a look he’ll get in his first camp is anyone’s guess. Newcomers don’t always get the chance to join a game day roster. Gall may only get a few days to prove that his current form requires minutes against two world powers.

You could contend that there’s irony in the fact that Gall is joining the USMNT at a time when his former MLS coach is reportedly a candidate for the permanent head coaching position. Gall himself told Galarcep that he “actually enjoyed my time in Columbus” and “was honored to be coached by Gregg Berhalter,” crediting the former US World Cup center back for helping him develop as a player. I can certainly appreciate the symmetry in Gall finding himself in Sweden, the same country where Berhalter began his journey as a head coach with Hammarby.

Not all who wander are lost, it’s said. Gall’s done some intriguing roaming to reach this stage. USMNT fans may enjoy tracking his journey from this point forward as well.