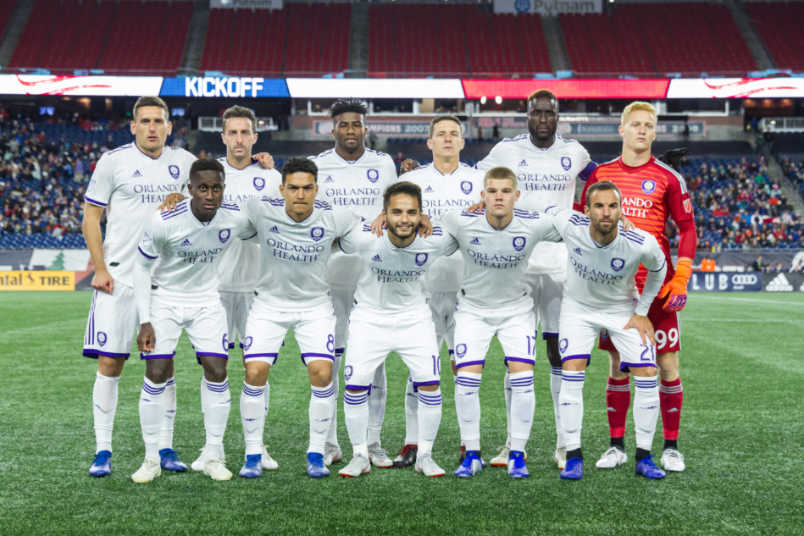 By Jason Davis – WASHINGTON DC (Nov 28, 2018) US Soccer Players – Orlando City hasn’t had much success on the field, failing to reach to the playoffs in every one its four top division seasons. Over that period, the club has gone through three different head coaches and several different strategies for breaking out of the also-ran group in Major League Soccer. None of the coaches (with the jury still out on the man hired in June, James O’Connor), nor the strategies employed have done much to move the club forward.

2018 was particularly poor, even by Orlando City standards. Several high profile acquisitions in the winter raised expectations, only for the Lions to finish dead last in the Eastern Conference. It was Orlando’s worst MLS season to date.

Despite that lack of success, Orlando remains a fascinating club to follow. A lot of that is down to the team’s ineptitude. Then there’s Orlando City’s knack for strangely timed, oddly framed decisions.

The latest example of Orlando’s penchant for wild timing came on Monday, when the club announced the firing of general manager Niki Budalic. In the position since December of 2016, Budalic was, along with former coach Jason Kreis, the remaining half of the team of decision-makers responsible for the club’s 2018 roster. Budalic’s dismissal was not surprising. What struck observers as strange was the decision coming down on the same day that MLS requires clubs to disclose its roster decisions for the next season.

While reporters around the country filed pieces on how clubs were navigating player contracts, Orlando City was announcing turnover in the position that handles those choices. In their release on Budalic’s dismissal, Orlando City included a quote from CEO Alex Leitao, a “thanks for the opportunity” missive from Budalic, and absolutely no information on what contingency the club had in place with roster decisions due.

For a club that must be careful not to burn the remaining capital it has with the fan base in Central Florida, the Lions are playing with fire. Again, a change at the general manager position makes sense considering the club’s season. It would have certainly made more sense to execute a switch well ahead of the roster decision deadline, giving the new GM time to sort through the list.

This all looks strange, even if Budalic’s work, in conjunction with ownership and O’Connor, was largely done by Monday. It also prompts questions of when Budalic caught wind of the change. No fan wants to believe that a lame duck general manager is making decisions on the future, particularly for a club that has been so wildly disappointing in four seasons.

Things got even stranger late Monday. With no information on the club’s contract decisions, reporters in Orlando tweeted that the club got an extension by MLS to exercise contract options. On the surface, it was another head-scratcher in regards to Orlando City off-season. Who fires the GM on the deadline day and then doesn’t have their paperwork ready for the league office?

It turned out that there was no extension. The notion the league had granted one was part of miscommunication by Orlando City to reporters. That hardly improved the look of things for the club. A lack of control of the message, even after Orlando’s contract decisions hit the news early Tuesday, pervades.

As for those decisions, the club announced the return of several key figures from 2018’s debacle. Dom Dwyer, Sacha Kljestan, Yoshi Yotun, and Lamine Sane remain under contract. Orlando exercised options on Will Johnson, Chris Mueller, and Uri Rosell, among others. Whether any additions will make the Lions markedly better and give the club a chance at the playoffs in 2019 is the question. There’s plenty of work to do to improve the side, especially when it comes to defending and depth.

Who exactly will be the architect of the next Orlando rebuild is an interesting question. Originally launched into MLS from a successful run in USL, Orlando City leaned on English connections through former club president Phil Rawlins and former head coach Adrian Heath.

When Flavio Augusto da Silva became principal owner, the focus changed. The club hired former Benfica academy director Armando Carneiro in November of 2015, only to see him depart for “personal reasons” before the 2016 season even began. The impact of Carneiro’s disastrous hiring didn’t end with his brief stint, however. Before Carneiro’s exit, the club’s first GM if not in name, then in responsibility, Paul McDonough, resigned as Senior VP of Soccer Operations. It was McDonough who brought recruiting and roster management expertise to Orlando. It was McDonough’s role that Budalic filled.

The next general manager of Orlando City won’t have any say on contract options. He’ll be working with a head coach who he didn’t help hire. He’ll be responsible for the success or failure of the club in 2019 despite the fact that he’ll join with the offseason already underway.

The pool of GM candidates for Orlando City is already thinner than it was just a few months ago. 2020 MLS entry Nashville hired former Sporting Kansas City assistant technical director Mike Jacobs away from the Western Conference power. Inter Miami, also set for a 2020 launch, scooped up McDonough, a man who might have considered a return to Central Florida in the new look Lions setup. DC United added an up-and-coming name to their staff when they grabbed RSL technical director Dane Murphy to work under GM Dave Kasper.

If they look to hire someone from within the league, they might have competition from the likes of the LA Galaxy. LA fired Peter Vagenas, the club’s nominal general manager, in a postseason shakeup of their own.

Orlando might take another run at an international name, a move that would fit with some bigger trends across MLS. Philadelphia chose to replace Earnie Stewart with Ernst Tanner, a German with no MLS experience but plenty of connections in Europe. Tanner’s hiring points to a focus on the academy for the Union, a club unable to spend with the richest clubs in MLS.

The Lions have made noises about developing talent through their academy and will relaunch Orlando City B in the third division next season. The club dropped a significant amount of payroll between 2017 and 2018 with the retirement of Kaka and is now in the bottom half of the league for total payroll.

Orlando City has shown no inclination they’re interested in another high salary DP signing. That points squarely towards another season built on a roster scouted and recruited the hard way. Higher priced names (Kljestan and Dwyer) and projects with transfer fees (Josue Colman) will likely fill the DP slots.

The difference between winning and losing in MLS can often be players at the back end of the roster, or the mix of qualities players bring to a system. Orlando’s general manager, whoever it might be, will need to fix the holes at the back, add depth throughout the squad, and tune all of those pieces to the identity installed by O’Connor.

It wouldn’t be easy anywhere. In Orlando, it might be asking the improbable.