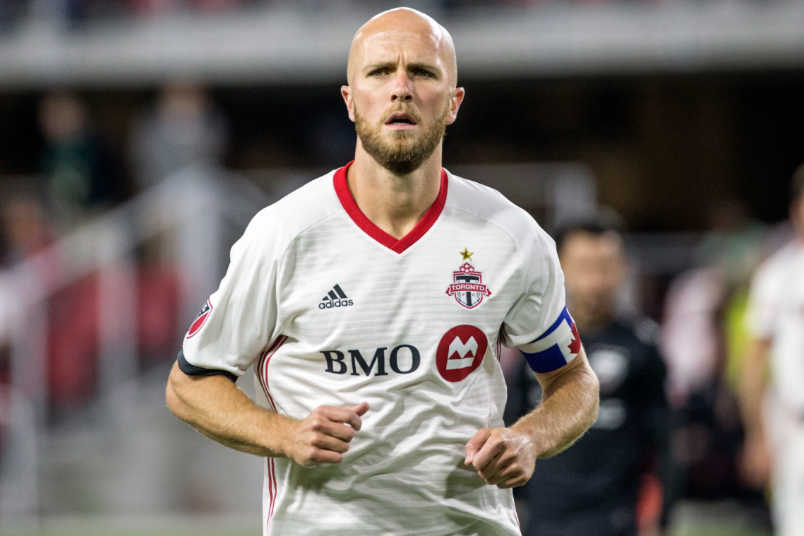 By Charles Boehm – WASHINGTON, DC (Nov 1, 2018) US Soccer Players – Michael Bradley had just played his second game in as many days, his third game in seven. After playing a substitute’s role in the USMNT’s 1-1 draw with Peru in Connecticut on Tuesday night, he’d caught a plane south and met up with his Toronto FC teammates for a Wednesday MLS visit to DC United at Audi Field on October 17.

He captained the Reds and went all 90 in a narrow 1-0 loss, TFC’s 17th of a dispiriting league season that ended outside the playoff places, 11 months after they won every trophy within their reach. Bradley looked exhausted, and understandably so. Perhaps less physically than mentally, given the extreme highs and lows that have marked his last couple of years for both club and country.

“I was excited to play,” he said when asked in a quiet locker room by reporters about his hectic 48 hours on the Eastern Seaboard. “Excited to play. I love to play. When you take all the other – when you peel away all of the BS, all the trophies, wins, losses, ups, downs, when you take all that away, I can’t speak for anybody else but I do this because I love the game. I love to play. So obviously given that I only played a few minutes last night, it seemed like a given that I was going to get here this morning and get ready to play.”

Bradley said that love was never shaken, even in the worst moments of this trying 2018. The fact that the question could even worth asking underlined what’s happened to him and his Reds teammates this season. It’s a tribute to their pride and professionalism that they ended their calendar on a defiant note with last Sunday’s 4-1 defeat of Atlanta United, preventing the Southern upstarts from inheriting the Supporters’ Shield Toronto won last year.

The past 24 months have brought a breathtaking rise and fall for TFC. After enduring PK-shootout heartbreak in MLS Cup 2016, they made history with last year’s treble campaign, an unprecedented achievement capped by December’s emphatic MLS Cup win on home turf. A stirring Concacaf Champions League run followed in the spring, breaking more records only to end with further disappointment via spot kicks.

Their “CCL hangover” proved acute, torpedoing their league ambitions as the task of making up ground on the rest of a competitive Eastern Conference turned into a grinding slog. A Canadian Championship title defense was their sole consolation, and a crucial one, offering a chance at CCL redemption next year.

“We put a lot into Champions League and went a long way into Champions League,” said head coach Greg Vanney after the loss in DC. “Physically, it took a toll on us, and we’ve been trying to recover ever since. Part of that, and the challenge of this league, is that you get on the wrong side of momentum, and have a lot of guys in and out and you can’t become consistent, and get on at least some runs through the course of the year, then the league is very punishing in that way.”

An important offseason awaits, as one of MLS’s model franchises dives into what GM Tim Bezbatchenko called “an autopsy on this year” in an end-of-season media availability this week.

Toronto achieved things that no one else in MLS ever had before. They set a new bar for the league and its two home nations with solid plans, deep pockets, and big ambitions. This year they attacked the tall task of building on 2017 with a level of gusto that is rare in their league, or in this continent’s soccer history, for that matter.

After playing deep into the winter on their MLS Cup run, TFC had an abbreviated offseason before racing into a busy preseason in Southern California and Mexico City. That paid dividends with their CCL triumphs over Tigres UANL and Club America. However, the bill eventually came due, as several key starters became costly casualties of a persistent injury crisis.

They exercised just about every competitive vehicle their single-entity league offers. They also spent more of their own money than probably anyone in the US and Canada has since the original New York Cosmos. They got as close to winning the Champions League as any of the league’s representatives ever has. TFC reached for the stars, fell agonizingly short and got slammed back to earth bloodied and bruised.

“Injuries are one part, they’re not the whole part. We’ve let ourselves down in certain moments, we’ve been let down in certain moments,” said Bradley. “But, it’s sports. There’s no perfect script that things are supposed to follow. You have to understand that everything is earned and what is one day is not necessarily the next day. And so we’ll see.”

Toronto’s leadership says the plan is to get up and try it all over again. In the meantime, it’s worth wondering: If this MLS team can’t pull it off, can any?

TFC have already announced a deal with a performance analytics company called Kitman Labs to better track the wear and tear on their squad and hone the periodization process to reduce injuries. With their ambitions moving them towards a 10-month schedule, they are also installing a state-of-the-art “hybrid” grass pitch at BMO Field to provide a better playing surface all year round.

“It takes not just 11 players, but 16 to 18 players to compete in multiple competitions,” said GM Tim Bezbatchenko this week. “Last year we really focused on Champions League and competing right off the bat in that competition. We went down to Mexico, we trained at altitude. What that didn’t factor in was the ability to be durable through 34 games in the regular season. So this year we’re going to look at the preseason and make sure it does both, if that’s possible. Clearly, around the world teams do both.”

Noted Vanney: “We had a couple sets where we had, what was it, six games in 18 days? And that’s just incredible on our guys – and then when you already have guys down, you’re just running the guys that you’re playing into the ground … We’re going to be a little more stable in preseason and be in one place, not traveling too much. Get some good training days in so that we can build some durability and try to go rotate our squad maybe a little bit differently.”

Perhaps the biggest challenge is the ceiling imposed on them by MLS’s stringent roster regulations. TFC already spend more on theirs than any other team in the league, the lion’s share of it going to the three Designated Players whose wages mostly fall outside the salary budget. Beyond the spending cap, they’ve only got 30 roster slots to work with, and at least two of those must go to Homegrowns. If there are new arrivals this winter, incumbents must leave to make room.

That’s a factor not only of Toronto’s past choices, but the baked-in design of a league that continues to value cost controls above all else, even if it means punishing the best teams in its history.

“We made it to the finals in 2016 and so a lot of players were hitting their bonuses and we were up against the cap – we live in a salary-cap world,” explained Bezbatchenko. “Salaries are always going to increase … so you’re always going to have to shed players. That’s what our system is, that’s what the league is. And the challenge is, how do you improve every year despite losing players that are crucial, critical to what you’re trying to achieve.”

The Reds offer a useful test case for MLS as a whole. The league’s executives have long claimed a thirst for finally winning CCL and thus breaking Liga MX’s firm headlock on the event. Doing so would seem to fit snugly into their long-term directive to climb into the global elite. This week we even saw another wave of rumors and reports that MLS could soon enter Copa Libertadores, the fierce pinnacle of South American club competition.

Such a partnership with CONMEBOL holds intoxicating possibilities. MLS tried before, most recently by DC United in the Copa Sudamericana a decade ago. The idea of North American teams competing on so many fronts, especially at such an epic scale of travel and logistics, does capture the imagination. It also sounds faintly preposterous when considering what happened to Toronto in 2018.