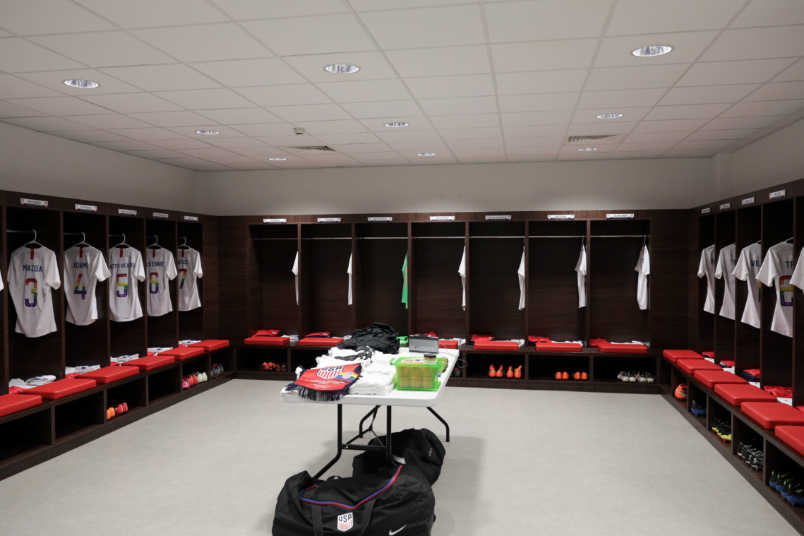 By Jason Davis – WASHINGTON DC (Nov 21, 2018) US Soccer Players – There’s only so much to take away from 2018, a year that saw a World Cup come and go without the United States participating for the first time since 1986. A period of transition saw a new president of the US Soccer Federation elected, a general manager installed to oversee the men’s national team program, and in large part because of the transition the team lead by an interim head coach for every match on the calendar.

That doesn’t mean that the year was without key figures. The list of players nominated on Tuesday for US Soccer’s annual player of the year award certainly has something to say about the future of the program. The five players who made the shortlist are there as much for what they can mean to the national team in 2019 and beyond as for what they’ve accomplished to date.

“Future” is central since two of the nominees are 20 years of age or younger, two are just 23, and the oldest, Wil Trapp, is 25. Tyler Adams, Weston McKennie, Matt Miazga, and Zack Steffen round out the group. Prior to 2018, not a single player on the list had more than four caps to his name. Miazga is the “experienced” hand in the set, having debuted for the national team way back in 2015. There’s a definite European slant to the nominations, particular of the kind that involves an MLS product finding his way across the Atlantic.

Adams earned his way onto the list with a 2018 campaign that included scoring the winner against Mexico in a September friendly. He showed himself ready to carry the significant load that comes with manning the middle of the field at the international level. Specific flavor of deployment aside, Adams is a menace who covers acres of ground. His defensive abilities stand out. Like most modern midfielders, he has a particular flair for popping up on the box on occasion to make a pass or score a goal.

That precocious talent has Adams in line for a move to Europe in the very near future. Nothing is official, but no one really believes that the Red Bulls academy product will be bounding around MLS fields come 2019. Adams is part of the first wave of American players whose talent is pushing them to top leagues earlier than before.

McKennie is Adams, but without the stop in MLS. Rather, McKennie is his own player. He’s extremely talented and extremely young, with an impressive club resume to back up his entry into the national team picture with a game that is somewhat similar. A quick rise to the first team at German club Schalke earned McKennie a central place in Sarachan’s team during 2018. McKennie is another natural two-way midfielder that can cover ground, break up opposing play, and push up into the attack.

Famously, McKennie signed with Schalke out of the FC Dallas academy rather than joining the MLS club as a homegrown player. He blazed a trail to Germany, following in the footsteps of Christian Pulisic before him, that others are now traversing behind him. Still just 20, McKennie is part of the generation that includes Pulisic, Adams, Tim Weah, and Josh Sargent. McKennie’s 2018 included six starts for the USMNT, making him one of the new fixtures of a team in dramatic flux.

Goalkeeper Zack Steffen made the nominee list thanks to six starts in net for the USMNT, a resume that included two shutouts. It was Steffen who was in goal when the Americans drew with eventual World Cup winners France 1-1 back on June 9 and Steffen who helped blank Mexico in a 1-0 win for the young Yanks over an equally young El Tri. Outfield positions come with a certain fluidity, but there is only one starting goalkeeper for any given team. Steffen might not have yet locked down the number one job, but he took good advantage of the platform he got in 2018.

The push for Americans to go to Europe actually led to Steffen signing with a German team coming off of two years at the University of Maryland and a strong showing at the US U-20 goalkeeper. Steffen’s time at Freiburg did not result in significant playing time, however, leading to his move back to the United States and the Columbus Crew in 2016. A return to Europe might be on the cards for Steffen, but for now the 23-year old is benefiting from an opportunity to start for a perennial MLS playoff team.

Matt Miazga made seven appearances for the USMNT in 2018 as part of the overhaul at centerback. The 23-year old is on the books with Chelsea of the English Premier League but has spent every season since his January 2016 transfer from the New York Red Bulls on loan. Making the list of player of the year nominees is recognition of Miazga’s maturation during his time in Europe.

If Miazga isn’t locked in as one of the USMNT’s first choice central defenders quite yet, it’s only because everything is uncertain until a new permanent head coach is on board. Miazga figures to be a major part of the plans for the next coach and will serve as an example of American defenders looking to go abroad in the quest to test themselves.

Last, but certainly not least, is midfielder Wil Trapp. Until Adams and McKennie, Trapp’s game is noticeably more sedate and focused on passing more than running. The Columbus Crew captain took that same role for the national team eight times in 2018, only ceding the armband in the year’s finale on Tuesday against Italy. Prior to 2018, Trapp had just two caps. As the year ends, he has 10.

Trapp’s game and demeanor made him Sarachan’s choice for the transitional leader in 2018. The 25-year old acquitted himself well in the role despite the difficult run and notable losses suffered by the national team. His inclusion in the player of the year shortlist is as much about his assumption of the captaincy in the vacuum created by the lack of veteran presence as it is about his play. It’s worth noting, however, that Trapp earned two “Player of the Match” awards in 2018, the only USMNT player to do so.

Unlike some of his younger peers, Trapp’s future with the national team will depend on his play for an MLS side. Whether that will be a hindrance to him continuing in his role as the new generation’s captain will come down to the opinion of the next coach.

The break between the old and the new for the USMNT has been dramatic and necessary. 2018 played out as a series of auditions featuring the best young and untested, at least internationally, soccer talent the country can call upon. It was largely messy, sometimes encouraging, and for better or worse, the basis for everything that comes next. 2018’s candidate list for the US Soccer Male Player of the Year Award is a near perfect reflection of that hopeful truth.