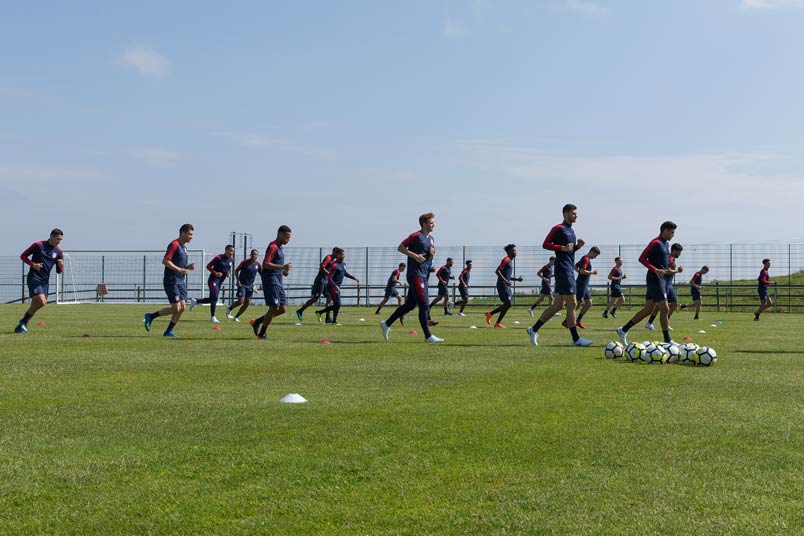 By Charles Boehm – WASHINGTON, DC (Dec 20, 2018) US Soccer Players - After more than a year of treading water and waiting on a permanent leader, the USMNT finally took a concrete step into the Gregg Berhalter era on Thursday. The new coach named his first roster, calling an MLS-based group of 27 players for the 2019 edition of the traditional January camp. It’s a group packed with familiar names and some fresh faces, most on the younger side with a few veterans sprinkled in. It gives us plenty to talk about between now and their first match of the new year, a friendly vs Panama in Glendale, Arizona on January 27 (8pm ET - ESPN2).

The first thing to note is the durability of the January camp tradition. The annual winter gathering was nearly ended by former coach Jurgen Klinsmann a few years ago. Perhaps looking to turn a page in this regard, Berhalter elected to relocate the camp from its usual home in Carson, California to Chula Vista. The event still survives, though, because the pragmatic reasons for its creation still remain.

The MLS offseason is one of the longest of any top-tier professional league in the world. After a decade or so of slowly but steadily shrinking, in part due to Klinsmann’s justified complaints, it looks set to lengthen again in a year’s time thanks to the league’s revamped and streamlined playoff format. There are many valid reasons for this, from climate to culture to facilities. The end result is an obstacle to player development. January camp seeks to fill that gap.

It’s also a timely opportunity for Berhalter to introduce himself to a big chunk of the player pool. Known as a “system coach,” the former Columbus Crew boss has stated his intention to implement the expansive, possession-oriented approach he used at that club. So given the limited time he’ll have in a typical USMNT camp, every moment he can spend teaching and guiding his players is valuable. With that in mind, here’s a positional breakdown.

With four goalkeepers called, it’s a relatively big goalkeeping corps. Fresh off of winning the 2018 US Soccer Male Player of the Year, Zack Steffen would seem to be the incumbent starter. Behind him are keepers at varying points in their international careers.

Now 29, Sean Johnson is familiar to most USMNT observers. He played for the U-20 and Olympic national teams and earned a handful of senior caps over the years without quite breaking through. Speaking to reporters on a Thursday conference call, Berhalter revealed that “SeanJohn” earned this call by showing growth in his game under NYCFC head coach Patrick Vieira. Specifically, comfort in distributing with the ball at his feet, a key trait under both coaches. Perhaps another late-bloomer story can unfold.

At 24 and 25, respectively, Alex Bono and Tyler Miller are further back in their career trajectories. Bono’s stock dropped in 2018 as his Toronto FC fell from all-conquering treble winners to also-rans. Miller made the most of an opportunity to fight for the starter’s role at LAFC. Both should benefit greatly from this camp, regardless of their ability to break into the USMNT lineup immediately.

On Thursday Berhalter spoke of the program’s strength in depth at center back, and it shows on this roster. Five center backs got the call, all of them with worthy resumes relative to their age and upside. It sets up an intriguing battle for match minutes. The identities of the starters in the camp-ending games vs. Panama and Costa Rica could tell us a lot about both the players and their coach.

The fullback choices definitely reflect Berhalter’s stated intention to play pass-and-move soccer. Reggie Cannon, Greg Garza, Nick Lima, and Keegan Rosenberry are technical, two-way players who’ve been in the squad before. Newcomer Daniel Lovitz is much the same. He's a savvy choice, putting in solid work in Montreal beyond the view of many US audiences.

Names like Kellyn Acosta, Michael Bradley, and Wil Trapp need little introduction and bring familiar attributes to central midfield. We’ll be watching closely to see where they fit into Berhalter’s plans. Marky Delgado and Cristian Roldan are slightly newer faces who should get their chances to impress in the engine room as well.

They’ll all have lively competition with the arrival of the tenacious Russell Canouse. A youth national teamer who dropped off the radar for a few years, he grabbed the spotlight with a major role in DC United’s 2018 renaissance. He was perhaps just as influential there as megastar Wayne Rooney. Another intriguing option is Sebastian Lletget, who looked primed for a breakout 2017 with the USMNT only to be viciously sidetracked by an injury in the World Cup qualifying win over Honduras. He’s smart, technical, and versatile.

Out wide, Paul Arriola’s aggression, speed, work rate, and spirit are always useful qualities. MLS Rookie of the Year Corey Baird will be a new face worth tracking, having shown an eye for clever movement and a flair for finishing in both forward and wing roles for Real Salt Lake.

The most unknown quantity of them all is probably Djordje Mihailovic. The Chicago Fire Homegrown returned from a serious knee injury and almost instantly made the Fire a better, more attractive product. A big part of that is his instincts in and around the opposition’s penalty box. At just 20 years of age, the sky’s the limit for him.

Berhalter earned the playful nickname of “the striker whisperer” during his time in Columbus, as he consistently made his team’s #9s into lethal finishers. Some of it was due to the Crew’s tactical setup, but he deserves plenty of credit for “coaching up” individual players. Gyasi Zardes is Exhibit A. The Southern Californian looked transformed by his move from the LA Galaxy to central Ohio this year. Though it might be asking a lot to expect such growth to extend to the international level, he’ll get his chance next month.

It’s interesting to consider whether Jeremy Ebobisse could benefit from Berhalter’s tutelage in the wake of a breakthrough season for MLS Cup finalists the Portland Timbers. One of the more thoughtful players in MLS, 2019 could be a defining year in the Maryland native’s career. January camp gives him a good launching pad from which to attack it.

Now 27, Christian Ramirez is no longer a kid, and to these eyes, he’s had to wait far too long to get his USMNT chances after showing his quality at multiple levels of the American soccer pyramid. His imagination and predatory nature around goal are fairly rare in this country, and could yet prove an X-factor for the national team. This looks like a particularly massive camp for him.

Tyler Adams at RB Leipzig and what’s expected from Weston McKennie at Juventus are examples of US midfielders capable of playing multiple roles.