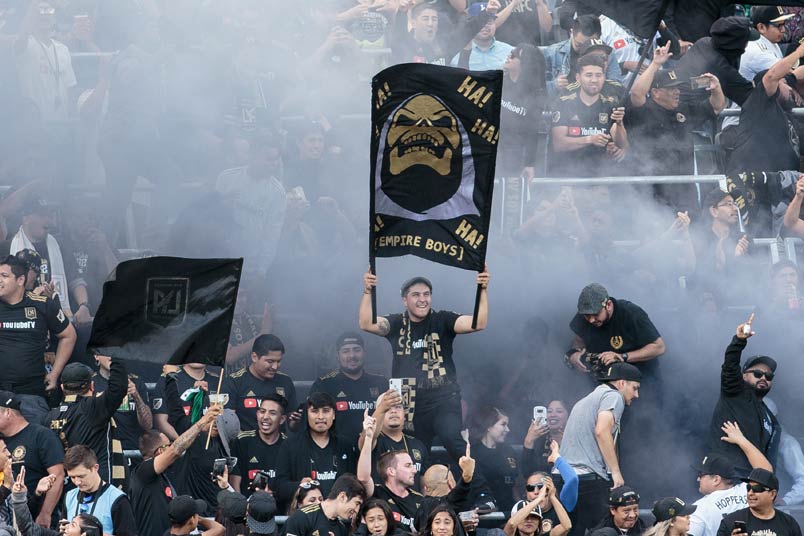 By Clemente Lisi – NEW YORK, NY (Dec 10, 2018) US Soccer Players – It was a season of records for Atlanta United. The newly-crowned MLS champions, in just their second year of existence, emerged as a truly unstoppable train. That’s thanks in large part to the scoring pace of Josef Martinez. The league’s MVP this season, Martinez easily surpassed the MLS regular-season scoring record 31 goals in 34 games. Add to that the coaching genius of Tata Martino, the record crowds at Mercedes-Benz Stadium, and investment by owner Arthur Bank and you have the makings of a potential dynasty.

Of course, Martino won’t be back in 2019 after his second-year franchise built a roster in his image. Martinez may not be back after garnering interest from European clubs. His status remains uncertain. However, after raising the trophy this past Saturday night, anything seems possible.

“There was more discussion on the outside of our locker room about Tata leaving than there was on the inside,” Atlanta goalkeeper Brad Guzan said. “He told us he was leaving, plain and simple. We got on with it. We knew what type of quality and what type of team we had, and we wanted to make the most of it. And here we are.”

As Atlanta looks ahead, here’s our chance to look back. With another MLS season in the history books, here are five takeaways from this past season.

What happened to the Red Bulls?

It’s an annual question, but one that has doesn’t often produce many answers. After a third Supporters’ Shield in six years that saw RBNY set a regular-season points record, it all evaporated once again in the playoffs. Despite its young superstars and veteran players, this is a team unable to get over the hump and win it all. Is bad luck to blame?

Here’s what we do know. Red Bull New York outclassed the competition during the regular season, including Atlanta United. That success didn’t last long in the playoffs. In the Eastern Conference Finals, Atlanta got the better of New York with a 3-0 win in the first-leg. That paved the way for another season with no MLS Cup trophy for the Red Bulls.

What they do now may be similar to what they did last offseason and the offseason before that. The Red Bulls will move players out, most recently selling Tyler Adams to RB Leipzig. Who else might follow for 2019 is the question.

For a team no one expected much from this season, DC United surprised us all with a great second-half. A new stadium energized the fans as did the arrival of Wayne Rooney. It was that confluence of events over the summer that put the team on the road to success.

That DC United was rebuilding was no surprise. Ben Olsen and the front office made some smart moves last winter, acquiring defenders Frederic Brillant and Joseph Mora to shore up the backline. They traded for striker Darren Mattocks and midfielders Ulises Segura and Yamil Asad. Add Rooney to that mix and DC United found a winning formula. The team’s established stars like Paul Arriola also had breakout seasons.

The move to Audi Field and Rooney’s arrival in July were decisive. Rooney scored 12 goals in 21 games. His crazy tackle/assist in stoppage time against the Galaxy in August exemplified a never-say-die attitude. It was that spirit that seemed to raise everyone’s game.

DC United clinched the playoffs through a nine-game unbeaten streak and finished the regular season fourth in the Eastern Conference. In a season that saw defending league champions Toronto FC fail to make the postseason, DC United’s success highlighted how unpredictable MLS can be from one season to the next.

The arrival of the Swedish sensation rocked the league this season. While it gave us all some great goals and even better post-game news conferences, the LA Galaxy had limited success. The team, still in a rebuilding phase, failed to make the playoffs on the last day of the season.

Ibrahimovic brought himself and the league lots of global attention. MLS remains a league that still needs it. While the striker’s arrival produced a sideshow at times, he was good for the team and league overall. Zlatan made the Galaxy a better team and helped produce some exciting moments.

Ibrahimovic’s season was a thrill ride for sure. He also produced for the Galaxy this season, recording 22 goals and 10 assists in 26 games. Not too bad for a man who’s 37. The Galaxy went from being the worst team in the league in 2017 to a playoff contender even after the team fired manager Sigi Schmid midseason. For now, the Galaxy’s immediate future remains uncertain as does Ibrahimovic’s.

LAFC sets off on the right path

The expansion LAFC got off to a roaring start. The preseason talk was all about how coach Bob Bradley could repeat what he did 20 years ago with the Chicago Fire and win the title in the team’s inaugural year. While that didn’t materialize, LAFC did produce some exciting moments.

While its rivalry with the Galaxy got things going, the team had a consistent summer. They finished third in the Western Conference and reached the semifinals of the US Open Cup. The fan base responded to a second LA team in amazing fashion and the players returned the favor with a series of wonderful performances. Strikers Carlos Vela and Diego Rossi scored seven and six goals, respectively. Striker Adama Diamonde led the team with nine goals during the regular season and turned into a pleasant surprise.

LAFC proved itself to be a strong team and can achieve much going forward. It has a core of strong players and Bradley’s tactical acumen – a strong backline and a midfield that pushed forward – made for a fun viewing experience. That’s the groundwork. Future success is never guaranteed, especially in a league like MLS, but this is a team that has good reason to be optimistic.

Portland-Seattle rivalry the greatest of all?

American soccer’s most-storied rivalry has also proven to be the best of them all. MLS loves to promote rivalries and derbies, but the Seattle Sounders and the Portland Timbers tangled in the regular season and playoffs this season. These sides really dislike one another and it shows each time they face off.

The teams played for the 100th time this past season, a game the Timbers won 1-0 on May 13 at home, in a series dating back to 1975 in the NASL. The rivalry persevered through various leagues until regaining national prominence in 2011 when the Timbers joined the Sounders in MLS.

An epic two-legged playoff series in the Western Conference semifinals capped their derby, as Portland ultimately prevailed 4-2 on penalties. The Timbers withstood a late Sounders comeback thanks to stars like Nicolas Lodeiro and Diego Valeri. Under first-year coach Giovanni Savarese, the Timbers overcame their rivals to reach the final. That only increases the tension for when these two teams meet in 2019.