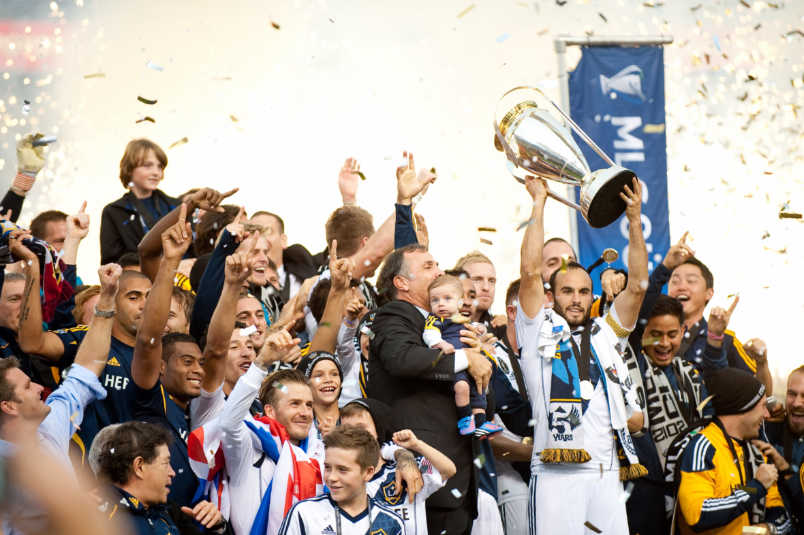 By Luis Bueno – RIVERSIDE, CA (Dec 5, 2018) US Soccer Players - The LA Galaxy has had some major acquisitions in its history. David Beckham helped transform not only the club but the entire league during his six-year stay. Landon Donovan became the face of the franchise, helping the Galaxy win four MLS Cups from 2005-2014. Bruce Arena built powerful teams during his eight-year stint. The Galaxy’s current target and imminent addition could eventually join those names.

According to multiple reports, the Galaxy is close to hiring Dennis te Kloese as its newest executive. Te Kloese would take over as the club’s director of soccer operations and, among his many duties, would be the responsibility for hiring a coach.

This could be the biggest move of the offseason and could steer the Galaxy back in the right direction. Not only could the club’s fortunes turn around, with te Kloese’s influence the club could once again become the model franchise it was during Arena’s tenure.

A native of the Netherlands, te Kloese came to this side of the world in 2003 to work with Chivas Guadalajara. He made his way to MLS with Chivas USA before returning to Mexico. He worked with Tigres in 2008 and eventually with the Mexican Soccer Federation in 2011.

What makes te Kloese such a fantastic hire is his proven ability to succeed at both the club and international level as well as his familiarity with MLS and the American youth system. Both of those can be confusing to manage for outsiders. Te Kloese became known in MLS circles when he came up from Chivas Guadalajara to help create and grow Chivas USA. After the first season, which was a debacle, te Kloese regrouped and helped create what was one of the league’s strongest clubs from 2006-2008.

It is that resurrection that the Galaxy are banking on. While few expected anything from Chivas USA, expectations are significantly higher on the LA Galaxy. The club has one of the highest payrolls in the league, fancies itself as the best franchise in MLS and is in direct competition for the city of Los Angeles with deep-pocketed newcomers LAFC.

The Galaxy does not need to be successful in 2021 or beyond. The club needs to be successful now. Turning around the fortunes of a team going in the wrong direction might not seem like something that can happen in one season. In MLS, hiring the right coach and adding a few strong players to this team could do the trick.

Te Kloese has vast contacts throughout Mexico and Latin America. He could completely change the culture of the club with one stroke. A quick glance at Atlanta United shows what the right hire can mean. Gerardo “Tata” Martino has had great success in his two years in charge of Atlanta. The club’s style of play is unique and success has followed. Atlanta made the playoffs as an expansion team last year and is now hosting MLS Cup. They're just 90 minutes away from what would be a remarkable first two seasons in MLS.

With te Kloese, the Galaxy could make a similar hire. He was an executive with the Mexican Soccer Federation when Miguel Herrera came and went and also was at Tigres with Ricardo “Tuca” Ferretti joined that club. Te Kloese helped bring aboard coaches with each of those organizations that helped turn fortunes around. With Tigres, he started an era of stability and success. Ferretti is still in charge of Tigres and has won four league titles since then, including three in the last six seasons.

Perhaps the right coaching hire - and te Kloese himself - can get something out of Giovani Dos Santos, who has been mostly a bust during his time in MLS. While an executive with the FMF, te Kloese has been among those who have welcomed Dos Santos to World Cups, Gold Cups and Copa Americas. Perhaps Dos Santos needs someone who believes in him and is familiar with him to help get the best out of him.

If he can help the Galaxy’s youth academy mine the talent that exists in Southern California, he could help develop players who could eventually comprise the first team roster. The Galaxy then, under te Kloese, could be successful now by bringing in a strong coach and talented reinforcements and can maintain that success, buoyed by the development of youth players.

Part of measuring a person’s value is how others respond after their departure. Beckham left the Galaxy after winning two consecutive championships and the club was unable to get past the first round without him the following year. Donovan left after winning MLS Cup 2014 and the Galaxy finished the 2015 season with a knockout-round defeat at Seattle. Arena stepped away after the leading the team to its eighth consecutive playoff appearance and the team has failed to reach the postseason in the two years since.

Te Kloese is the right hire to help turn all those missteps around. He can turn the club’s fortunes around beginning in 2019. Perhaps, is all goes well, te Kloese will join Arena, Donovan, and Beckham in the club’s pantheon of legends.