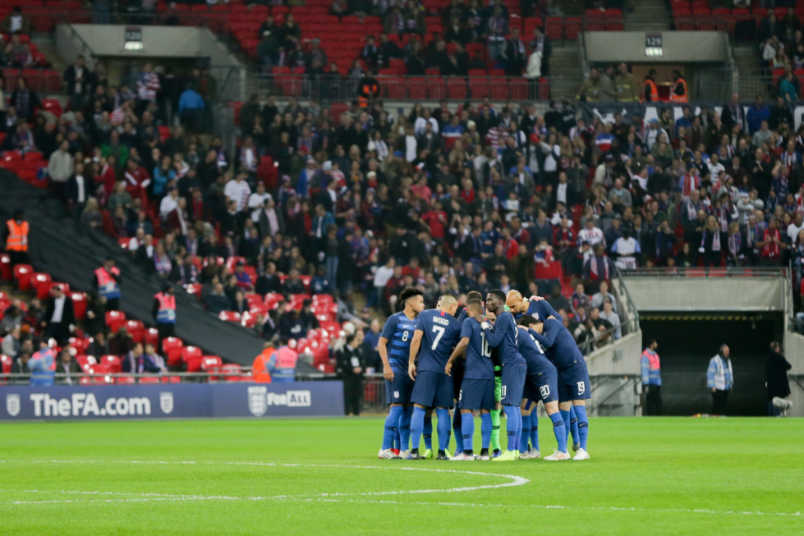 By Charles Boehm – WASHINGTON, DC (Jan 4, 2019) US Soccer Players - January is here and the blank slate of a new year, a new cycle, and a new era awaits the USMNT. Gregg Berhalter is about to convene his first training camp as head coach. The first match of 2019 kicks off in under a month. There’s a Gold Cup trophy to defend come summer. A new competition, the Concacaf Nations League, starts in September. The road to the 2022 World Cup qualification will soon be at hand.

With all that in mind, here’s a few topics to consider as the year begins.

Can the US defend their Gold Cup crown?

Though it got lost in the furor around the 2018 qualifying cycle, the USMNT did hoist a major trophy in 2017 and remain Gold Cup champions heading into this year’s edition. Besides the obvious appeal of winning hardware, there’s the potential for another shot at the Confederations Cup. Stress on potentially, since FIFA has yet to officially announce that the Confederations Cup will happen.

The USMNT benefited greatly from their 2009 run in that tournament in South Africa. Readers may also recall what a point of emphasis the Confederations Cup was for former coach Jurgen Klinsmann, though he couldn’t chart a course to the 2013 or 2017 editions.

“To be in the host country a year before the World Cup is a huge opportunity to get to know the stadiums and the training sites, get used to the travel and the food and the hotels, and most importantly to make connections,” Klinsmann told FIFA.com ahead of the 2015 CONCACAF Cup. “Organizationally you can solve problems before you get there, so it gives you a leg up. And of course you get to play against some of the best teams in the world, which we don’t get to do consistently. That’s critical.”

Will Berhalter pick players for his approach, or pick an approach for his players?

It’s an old question, and one particularly pertinent for player pools that are much deeper in some areas than others. Thus far the new boss has spoken of translating his expansive, possession-oriented style from Columbus Crew SC to the national team, with some mention of high pressing as well. The devil’s in the details, of course, and it will take time for both him and us to learn what makes sense in this new context.

Berhalter’s January camp roster gave a few clues. Yet those squads are almost always far from a complete reflection of who a coach will select during international windows. Will he decide that the current player pool, as we generally perceive it, provides him with the materials to execute his principles at a high level? Will he have enough time with the team to implement them? If things don’t go well, does he change his players, or simplify his tactics?

The same is true of formations and patterns of play. Under Berhalter, Crew SC generally used a 4-2-3-1 shape and relied heavily on dynamic fullbacks, drifting wingers and a creative No. 10 at the center of it all – usually Argentine maestro Federico Higuain – when things worked best. Does that make sense for the USMNT?

Over the decades we’ve heard lots of coaches talk about proactive and attack-minded ways of playing. Many tend to reel in their ambitions when it comes to actually making it happen under duress, in big games. Some of that is just acknowledging the realities of the international game. Some of it reflects deeper shortcomings. Berhalter’s first six to eight months will be notable along these lines.

Higuain was the highest-paid player in Crew SC history. An old-school Argentinean #10, his vision and technical quality provides their attack with a critical dose of inspiration and cunning. It’s no secret that his is a skillset American soccer has traditionally struggled to produce reliably.

Christian Pulisic seems to be the leading contender for this role. He’s fulfilled similar central attacking midfield assignments with the national team before, even if his usual spot at Borussia Dortmund has been on the flanks. Yet as good as he is, he’s only one part of the equation.

Are there enough playmaker types available to Berhalter to build such a role into his default system? You could argue that there’s only one out-and-out #10 on the January camp roster, Chicago Fire youngster Djordje Mihailovic. Though others on that list are certainly capable of doing the job in some form. Perhaps a committee approach is in the coaching staff’s plans, like the center-mid trios we saw plenty of under caretaker coach Dave Sarachan.

Is Pulisic's big move a sign of change/growth on the overseas front?

Pulisic’s record-shattering transfer from Dortmund to Chelsea is already the biggest news of 2019. It’s a huge development for both the player and the wider US soccer scene. Is it a one-off situation reflective of Pulisic’s rare gifts, or a sign of American talent being more respected and valued on the world market?

Your choice probably reflects your general outlook on the overall contemporary landscape. Wealthy Chelsea splashes out gaudy transfer fees and wages. They seem to have acted decisively to head off a bidding war for Pulisic. The 20-year-old is undoubtedly a special player.

That said, the recent flow of US youngsters to Europe has been steady, and promising. It’s not crazy to wonder why others couldn’t follow at least a somewhat similar path to Pulisic, whether they have access to a European Union passport or not. In this regard, the likes of Tyler Adams and Josh Sargent will continue to have plenty of eyes on them in the year ahead, regardless of whether they carry a hefty price tag or not. Which brings us to our final item….

Will we see real movement on the training compensation/solidarity payments front?

This is one of the intriguing sidenotes to Pulisic’s transfer. Pundits and advocates for the adoption of the international system in this country have noted that PA Classics, his Pennsylvania youth club, could receive as much as a quarter of a million dollars or thereabouts from the Chelsea transaction if the US followed the FIFA conventions.

This is a complex topic for American soccer and will continue to be. The simple dollar figures involved here focus attention on why that is. It’s tempting to dream big when considering what even a scaled-back version of TC/SP could do for domestic player development.

This year could well give us a watershed moment, like via the DeAndre Yedlin/Crossfire case currently in process at FIFA’s Dispute Resolution Chamber. The MLS Players Union and US Soccer have long opposed TC/SP in this country, citing freedom of movement and a range of other factors, and appear to remain so. MLS commissioner Don Garber has recently revealed a change of heart in his organization, though, which could alter the dynamics.

A compromise solution might take shape as a modified, US-specific form of the practice. Or maybe FIFA’s system will dictate a landmark top-down change. Or they could affirm the validity of the status quo. Safe to say that any news here will be big news in 2019.