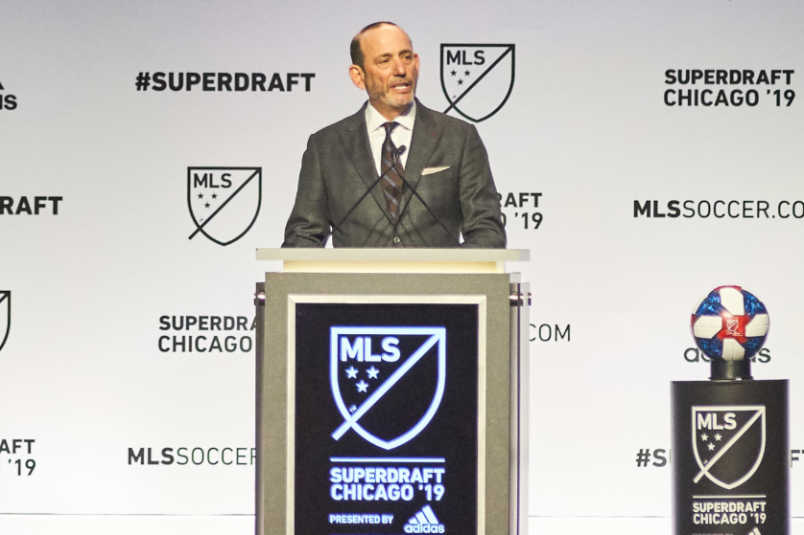 By Charles Boehm – WASHINGTON, DC (Jan 22, 2019) US Soccer Players – It’s been winding its way through FIFA’s adjudication systems for nearly four years. Now it seems that a verdict may finally be nigh on Seattle-area youth club Crossfire Premier’s legal pursuit of solidarity payments relating to their former player DeAndre Yedlin’s 2015 transfer from the Seattle Sounders to Tottenham Hotspur.

The fate of the Yedlin case, along with parallel ones relating to Michael Bradley and Clint Dempsey’s youth clubs and those players’ later professional transfers abroad, still looms as potentially one of the most consequential off-field milestones in the modern history of the American game. A ruling in favor of the right of US youth clubs to collect solidarity payments and/or training compensation could shift the landscape of US soccer dramatically. A decision in the other direction could entrench the status quo with similarly far-reaching effects.

That was one of several youth development topics discussed on the margins of the United Soccer Coaches convention earlier this month. Here’s a few others I heard about in Chicago and will be keeping an eye on this year.

FIFA’s bureaucracy has taken ages to process the US clubs’ petitions for compensation. That said, all involved are bracing for the impact of a significant ruling, which could (supposedly) drop in the next month or so.

Would the implementation of training compensation and solidarity payments (TC/SP for short) send money flooding into American grassroots soccer and alter the landscape with a whole new set of incentives and beneficiaries? Could we enter a brave new world of player development? Or would the current scene just get that much more chaotic? No one really knows, which fuels the jitters of this waiting game.

There seem to be two key spheres to ponder:

1) Whether FIFA will force the US to adopt international norms on player transfers overseas like Yedlin’s move, and others like Christian Pulisic’s move to Chelsea.

2) Whether a similar system would end up proposed or mandated on a domestic basis. This would mean that in the Yedlin example, the Sounders would compensate or reward Crossfire in some form when Yedlin moved from the youth club to the professional club

Sources close to the situation have told me that Crossfire’s legal team and the federation have already held preliminary discussions on a compromise solution for the second item. We might well hear a whole lot more about such ideas in the months to come.

For years MLS appeared to be an obstacle to TC/SP in the US. League officials long kept in lockstep with USSF execs on the party line that they wouldn’t implement the international system due to fallout from the Fraser vs MLS antitrust case in the late 1990s.

MLS commissioner Don Garber effectively reversed that stance last year. He announced his desire to increase the number and value of player sales abroad during his “state of the league” address just before MLS Cup 2018 in Atlanta. He fleshed this out during his media availability at the SuperDraft in Chicago.

“We need to be thinking about becoming more of a selling league,” Garber said, “to get some return on the $100 million a year we’re spending on player development… We have to start seeing some return on that, or I can’t look an owner in the eye and say that this makes sense. This is not a philanthropy. This is about trying to build the right kind of environment to develop players in ways that teams can find effective… I do believe that we need to see more Zack Steffens and Tyler Adams.”

This shift of intentions is noteworthy in and of itself. As for actual implementation, the devil’s in the details. What do Garber and his investor/operators have in mind when they visualize a profitable marketplace for selling players abroad? Will it benefit US players and/or clubs at all levels in general, and the USMNT in particular? What about the federation? Which brings us to…

Daylight between MLS and USSF

This country’s federation and its top-flight pro league have long maintained a cozier working relationship than most. Garber famously (or infamously, depending on your perspective) hailed their “incredibly positive and mutually beneficial relationship” when he lambasted Jurgen Klinsmann’s reactions to some high-profile USMNT player homecomings to MLS in 2014, urging the then-national team coach to get “in line with the vision.”

That sturdy partnership endures. Yet some small cracks might be appearing. During his “one on one” Q-and-A session at the convention, USSF talent identification chief Tony Lepore discussed the evolution in his field, overseen by the fed but led and in some cases sidetracked by the lessons of MLS’s entry into the development space. The perceived poaching of pro clubs, for example, has been a sore spot since the founding of the US Soccer Development Academy a decade ago.

“When the academy started, I think a lot of clubs made a mistake and now they’re going back and focusing on this – they were either just seen as recruiters or there was no relationship, there was not even a discussion before a player moved,” said Lepore, who helped found and oversee the DA before shifting into his current scouting focus.

Lepore was not specifically alluding to any particular clubs or group of clubs, and spoke in positive terms about the work of MLS and other pro academies. Recent years have nonetheless seen the conventional wisdom seesaw a bit. First, the DA expanded, going younger and younger in age all the way down to Under-12 level. Last month that changed, as pro clubs have focused on older kids.

“Scouting’s about relationships, and it’s also about clubs driving talent identification in their own communities,” Lepore noted. “When you talk about 9, 10, 11 [years old], that’s about building a relationship, and being a resource for a smaller club, which is a responsibility of the professional academies.”

Themes like community and responsibility weren’t quite at the tip of Garber’s tongue.

“We are very strategically linked and committed to developing the game, but I’m not sure the long-term future will be for us to be as closely aligned as we been in the past,” he said, “unless there are ways for us to work together to ensure that we have an opportunity to be more successful, perhaps, than we were in the past.”

One sign that MLS and USSF are no longer in lockstep would be the league pulling their top academy teams out of the DA, or perhaps competing in their own division. The concept has been a rumor for years, one that finally emerged in public discussion this month in Chicago.

“Nothing’s decided yet. We are talking about that, in a continuous process of evaluating how to create the best schedule for our clubs,” said USSF Chief Sport Development Officer Nico Romeijn when the topic came up during Lepore’s session. “It’s a big challenge when we are looking at the size of our country.”

Many MLS academy coaches believe playing less-talented opponents who sometimes have a different mindset or philosophy inhibits their players’ progression. They’d generally rather be competing with other pro academies, including more international opposition. Yet travel costs and logistics would make an all-MLS youth league like Liga MX’s very expensive to execute.

“Certainly no decision has been made,” said Garber. “There have been lots of discussions about, what do we need to do to ensure that we are developing players in a way that is efficient, that is utilizing our resources effectively, and with all the changes that are going on with the soccer landscape, taking our responsibility to ensure that we’ve got the best possible competitive environment.”

Some MLS clubs might just throw in the towel

Even as the league as a whole claims to spend nine figures annually on development, rumors abound of member clubs who’d eagerly shut down their youth academies if they had the choice. I’ve heard this said about several franchises, some based in large markets with ample talent in their backyard.

Why? For some, youth development is more time, trouble, and expense than it’s worth. Investor/operators could spend those millions on established players, mostly from abroad, with more immediate return on investment, as MLS’ recent outlays on various allocation money mechanisms suggest.

“If they can take that money and say, ‘Give me that money in TAM, or a Designated Player, so I can satisfy my fans,’ then that’s something that is counter, perhaps, in the long term to decisions we have to make in youth investment,” said Garber. “We do need to see more return.”

On first blush, at least, the idea of MLS retreating from the youth space to any extent sounds like a problem for the US national teams. As of now, every club in the league has to operate an academy. Could that change? What aftershocks might it send reverberating across the wider ecosystem? Or would those lacking full commitment be doing everyone a favor by bowing out?

That’s one of many areas in which we’ll have to watch and wait as 2019 unfolds.