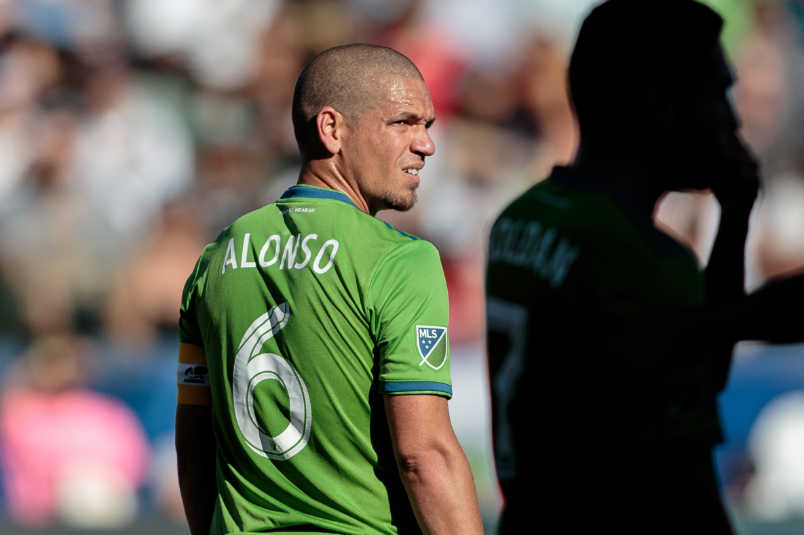 By Jason Davis – WASHINGTON DC (Jan 9, 2019) US Soccer Players – Osvaldo Alonso is out-of-contract after 10 years manning the midfield for the Seattle Sounders. The likelihood is very high that the Cuban will move on this winter, departing Seattle and landing in another MLS lineup for the 2019 season. To lean on a well-worn cliche, it’s truly the end of an era.

The mechanics of the Sounders letting Alonso walk with Minnesota United rumored to sign him are fairly straight-forward. At 33, Alonso is still an effective defensive midfield presence, but his salary requirements don’t make sense for the Sounders. Seattle has younger options capable of stepping in for Alonso and can find players on the international market at lower price points.

United, on the other hand, is still trying to build a winner. That means paying a premium to proven players like Alonso to convince them to join a fledgling operation with two poor seasons behind it. The Loons’ new stadium that opens this season will change the complexion of the club. United seems intent on putting together a winning side for 2019.

Whether or not Alonso lands in Minnesota, his time in Seattle deserves retrospection. There is no MLS history for the Sounders, a club with four US Open Cups, one Supporters’ Shield, and one MLS Cup title to their name, without Alonso. His more than 300 appearances for the club between the regular and postseasons is 80 more than any other Sounder in the MLS era.

The greatest measure of Alonso’s influence in the Sounders’ success is that his absences were often the most remarked upon element of any game he missed. A ground-eater with an edge, Alonso epitomized the modern MLS defensive midfielder over the last decade. His tireless work in front of the Sounders back line allowed greater attacking freedom for players ahead of him, defining Seattle’s style under both Sigi Schmid and Brian Schmetzer.

The cadre of top tier defensive midfielders that arrived in MLS over the last decade – Diego Chara, Michael Bradley, Ilie Sanchez, Alexander Ring, Eric Remedi to name just a few – were rightfully compared to the standard set by Alonso in Seattle.

Alonso’s success in MLS is even more remarkable considering his origins. His was not a story of natural progression from academy to pro, or college to pro, or even from the professional ranks abroad to the burgeoning North American competition that is MLS. Alonso signing with the Sounders following the 2008 American soccer season did not happen with any fanfare. At the time very few people knew anything about him. Those that did were working with an extremely small sample size.

The earlier mention of Alonso’s Cuban nationally should have been a hint about his unique journey. Cubans are few and far between in professional soccer anywhere. The political situation in that country has long prevented extremely talented athletes from trying their luck abroad. Those that have managed to play professional sports outside of Cuba did it by taking significant personal risk.

Alonso took that risk in 2007 while a member of the Cuban national team taking part in that summer’s Gold Cup tournament. Cuban defections during soccer tournaments held in the United States were fairly commonplace with the team under limited supervision and the opportunity to sneak away ample. Alonso simply wandered away from his teammates while at a Walmart in Houston, Texas, exited the store, and found a Spanish-speaker on the street. A phone call to a friend in Miami eventually let to a request for asylum and his move to the United States.

His play with the Cuban national team earned Alonso a look by at least one MLS team and several lower division sides. Offered the then-minimum $12,500 developmental salary with Chivas USA, Alonso instead signed for the Charleston Battery of the USL First Division. The Battery was a longstanding American soccer club but still off the beaten path for a player with higher ambitions.

Alonso managed to win the USL First Division Rookie of the Year Award in 2008 thanks to his 31 starts, seven goals, and excellent defensive work – all while separated from his family. Playing without a guarantee of a shot at the top division, Alonso adapted to an American league in a new cultural environment without so much as a hiccup.

That season landed Alonso a chance with the Sounders as the club moved up from the USL First Division to Major League Soccer for the 2009 season. Though the club had a new head coach, MLS legend Sigi Schmid, the club’s familiarity with Alonso from facing off against him in 2008 played a major role in his signing.

Seattle turned out to be a perfect place for Alonso to blossom as the league’s top defensive midfielder. As an expansion team, expectations were relatively low and the freedom to promote second division players ample for the Sounders. Despite his limited experience playing outside of Cuba, Schmid gave Alonso a chance. Once in the Sounders lineup, Alonso did not leave it, save for injury, for nearly 10 full seasons.

Alonso navigated the coaching change that saw Schmid ousted for Schmetzer. He was brilliant down the stretch of the Sounders championship season of 2016. Summer signing Nicolas Lodeiro grabbed a lot of the headlines and credit for Seattle’s run to the title that season, but it was Alonso’s league-leading passing and recovery numbers that provided the platform for the Sounders to turn around a poor start and shock Toronto at BMO Field.

Major League Soccer has changed massively since Alonso walked out of that Houston Walmart and into a legendary professional career. In 2019, chatter about new signings, even in the often underappreciated position of defensive midfielder, centers around young, expensive internationals jumping to North America from places like South America and Europe. Players like Herrera, a Venezuelan U-20 international with massive promise and Remedi, Atlanta’s 23-year old summer addition, fit perfectly into the new look MLS.

Whether that means a story like Alonso’s is now unlikely is an open question. The degree of difficulty has risen dramatically. That the determined Cuban not only found his way to becoming one of Seattle’s best players when he arrived in 2009 but consistently played at MLS-elite levels for a decade is a remarkable story. Perhaps Alonso was unique, or perhaps MLS is narrowing the path for players to emulate him.

The Loons are getting a good one. Seattle fans swallowing the bitter pill of Alonso’s departure can take solace that their man is getting paid an excellent wage to play in a brand new building for a third-year team ready to compete.

All good things come to an end eventually. All heroes must ride off into the proverbial sunset. Even the best stories, the real-life ones, have a sad goodbye. It’s the end of an era in Seattle and what a marvelous era it was.