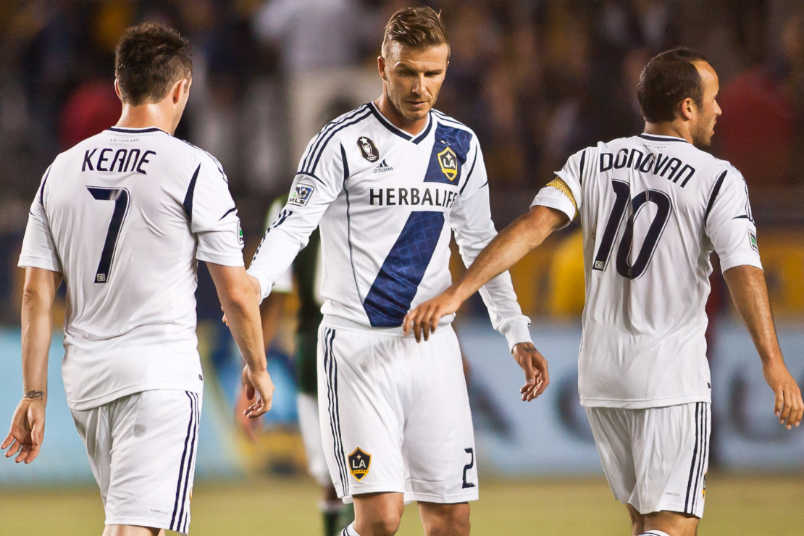 By Luis Bueno – RIVERSIDE, CA (Feb 13, 2019) US Soccer Players – In many ways, David Beckham was a trailblazer during his time in MLS. Perhaps the most popular soccer player to ever play in the league, Beckham’s legacy is still felt long after his days in the league ended. To this day, Beckham is still blazing new paths for others around the league to emulate.

Beckham will become the first MLS player to have a statue dedicated in his honor. The unveiling will happen before the LA Galaxy’s 2019 season opener on March 2 against the Chicago Fire at Dignity Health Sports Park. As fitting as this is for Beckham, however, this statue is not honoring the Galaxy’s most iconic player.

Beckham may have been the most influential player to ever play in MLS, but it is Landon Donovan who had the most impact on the Galaxy. The Galaxy has won just one MLS Cup without Donovan on the roster. Donovan is the league’s most decorated player. He was the biggest reason why the Galaxy went from a team that failed on the largest stage more often than not to a club that was, for a while, the standard for quality in MLS. With both on the field, the Galaxy mixed star power and trophies.

Now it’s Beckham joining the LA sports legends who have statues such as Shaquille O’Neal, Magic Johnson, Jackie Robinson, Jerry West, Chick Hearn, Wayne Gretzky, Oscar de la Hoya, and a few others. Of all of those LA sports legends, it is Gretzky who is the most similar to Beckham. Like Beckham, Gretzky had an impact on his league that extended beyond the ice, as Beckham’s influence on the league went well past the field.

Gretzky’s impact though was more regionalized. He injected life and excitement about hockey in Southern California. The Kings had long been around, but hockey in sunny LA was an afterthought before Gretzky. When Gretzky arrived, people began to pay attention to hockey. It certainly helped that they came close to a title, but Gretzky made the difference.

Disney eventually made a hockey movie and then took the plunge into the world of professional hockey as the Mighty Ducks of Anaheim joined the NHL in 1993. Two years prior, the San Jose Sharks joined the NHL, as the city of San Jose also cashed in on some of that NHL excitement. Had Gretzky not joined the Kings in 1988, the NHL might taken much longer to catch on in the Golden State.

Beckham of course sparked that same interest but across the entire league. He joined MLS when there were 13 teams in the league. Within four years there were 18 and the league really transformed. Soccer was different. MLS was no longer the little niche league. Beckham helped usher in the era, taking the league from what fans generally call MLS 1.0 to MLS 2.0, a league that had a far greater reach and that saw many teams build permanent homes and bring in some top-caliber and expensive players.

For 2019 MLS will have 24 teams competing for MLS Cup, with several more on the way including Beckham’s Inter Miami FC side. Much of that may not have happened as quickly or at all had Beckham not left Real Madrid for the Galaxy in 2007.

Yet, it’s Donovan who has had the greatest on-the-field impact of any LA Galaxy player ever. Donovan was an instant success when he joined the Galaxy in 2005, helping them win the title. He and Beckham won two MLS Cups together, in 2011 and also in 2012, which was Beckham’s final year with the Galaxy. Donovan won another MLS Cup during his final season with the club in 2014.

Donovan’s impacted the entire league as well. MLS opted to honor Donovan by attaching his name to the league’s Most Valuable Player award. HIs all-time goals record will likely fall this season, but his assist record figures to stand the test of time. Donovan finished his career with 136 assists. Among active players, the closest to that figure is Orlando City’s Sacha Kljestan, who has 90 career MLS assists.

Beckham was a key player for the Galaxy during his time with the team, as was Donovan. There’s an argument that it was yet another Galaxy player who was the most successful Galaxy player of all-time. Robbie Keane joined late in the 2011 season and helped the Galaxy win not only the title that year but the following year and three in a four-year span. He gave the team another dangerous goal scorer. That made the Galaxy unstoppable.

Still, no player, not Donovan and not Keane, had quite the amount of sway that Beckham had. Beckham was an A-list celebrity who just happened to play soccer. He made both soccer die-hards and soccer moms swoon and forced the country to pay more attention to soccer. Anyone who can do that deserves a statue.