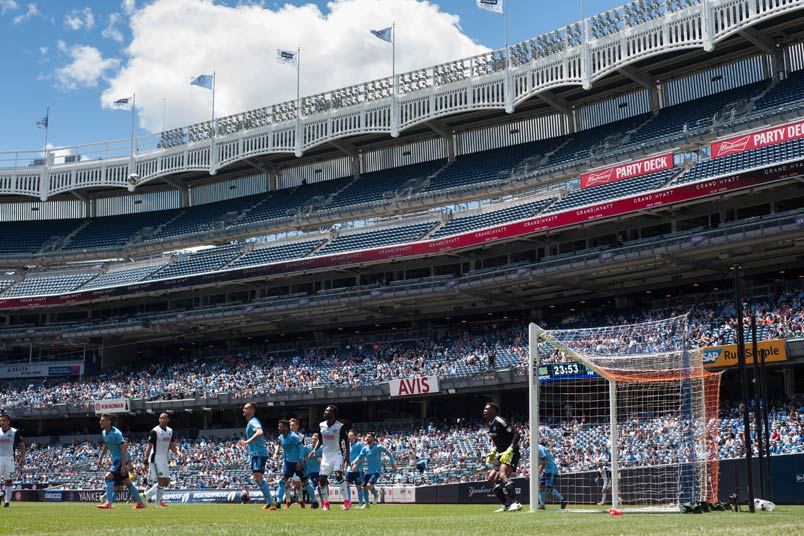 By Jason Davis – WASHINGTON DC (Feb 6, 2019) US Soccer Players – While Atlanta United makes headlines across North America thanks to the record-breaking sale of Miguel Almiron and the signing of Pity Martinez, the rest of MLS contemplates a changing league and the future of Designated Player business. Not everyone can be Atlanta United, backed by the wealth and enthusiasm of owner Arthur Blank. Many MLS teams are simply making do with less. Even those with the money to invest as dramatically as Atlanta might buy into the shift in strategy.

Fortunately for those clubs, it is still possible to engage in the international transfer market at a lower price point and make smart, impactful signings. The changing complexion of MLS, thanks in large part to Atlanta United, might make convincing fans that a less heralded name coming from a less heralded league is good business harder. Still, those clubs who can best communicate identity and a requisite plan will be fine.

A pair of DP signings this week merit highlighting in the glow “MLS 3.0” dawn. NYCFC’s acquisition of 23-year old Romanian attacker Alexandru Mitrita and Real Salt Lake’s signing of 25-year old Liberian forward Sam Johnson say a lot about the teams that brought them in, the fans the clubs are trying to mollify, and the changing attitudes in the league.

Mitrita is the more expensive of the two, by a significant amount. Through the exact fees are undisclosed per league policy, well-sourced reports put the fee at $8.5 million. That price would make Mitrita the third most expensive player in league history, behind Pity Martinez and Ezequiel Barco of Atlanta United.

Martinez is the reigning South American player of the year thanks to his exploits with River Plate in the Copa Libertadores. Barco is one the most heralded teenagers on his continent in 2018. What’s curious about Mitrita and what NYCFC reportedly paid is his rapid climb in value. Just 12 months ago the attacker cost Universitatea Craiova less than $1 million when he joined from Italian side Pescara. Mitrita’s time in Pescara wasn’t fruitful. He scored just two goals in three years.

The return to Romania paid dividends and helps explain why he cost NYCFC so much more than he did Universitatea Craiova in January of 2018. Through the calendar year of 2018, Mitrita scored 24 league goals in 47 matches. That’s an excellent return for a player who does not play striker, regardless of league quality.

It’s impossible not to ponder the strength of the Romanian league when compared to MLS, however. NYCFC is taking a risk with a player who hasn’t achieved much at higher levels. For reference, Romania’s Liga 1 is ranked 29th by UEFA’s coefficient, placing it between 28th ranked Bulgaria and 30th ranked Slovakia.

The fee paid for Mitrita will grab some attention, minus any deep dives into his history by NYCFC fans. He isn’t a name player and he doesn’t have the cache of the club’s recently departed DP, David Villa. It would be unfair to ask Mitrita to live up to Villa’s immense impact on the club. It’s not unfair for fans to ask if Mitita is the right type of signing for a team trying to live up to their market and their initial ambition.

The evolution of MLS thinking on DP signing exemplified by Atlanta United centers on resale. Perhaps that what Mitrita is for NYCFC. He’s a talented young player with room left before he hits his ceiling that could eventually return the club a healthy profit. Just because Atlanta United trawled South America for talent doesn’t mean there are other avenues open to savvy MLS clubs willing to drop a few million on a transfer.

RSL’s acquisition of striker Sam Johnson might fall under the same heading, but the details are different enough to leave it unclear. Johnson is 25 and arrives from Valerenga of the Norwegian top flight, where he scored 11 goals in 21 matches last season. Johnson had previous stops in China and Sweden. His resume fits the profile of a low-level DP signing, the type that many MLS teams made use of during the last decade.

Johnson’s signing requires patience from the RSL faithful. The organization deserves some benefit of the doubt, though. RSL is the same club that signed creative midfielder Albert Rusnak in 2017, a player that has been a revelation for the club in the middle of the field. The club fended off offers for Rusnak and signed him to a massive new contract in 2018.

No one pegged Rusnak as a sure thing ahead of his arrival in Utah. Johnson, too deserves a chance to prove himself worthy of the DP tag. We don’t know the number attached to Johnson’s move, so it’s more difficult to judge how astute RSL’s spending was against the broader MLS incoming transfer activity.

One difference, at least on the face of it, is age. Johnson isn’t a young player as these things go, but neither is he on the verge of hitting 30. At 25, RSL can hope that he ages into his prime.

It makes sense that any real change to the way MLS club approach DP signings would unfold over time and taken varying forms. It’s unrealistic to expect everyone to dive head first into the deep end of the pool, regardless of Atlanta United’s success in the market.

What looks like a signing fitting the status quo might represent an evolution for some clubs. It’s the thinking that matters, almost as much as the resume of the player or the fee. Only time will tell if Mitrita and Johnson can score goals in MLS and do the primary job of helping their team win. Only the market for MLS talent and the two clubs’ ability to spin their new signings onto for bigger prices will reveal if this pair of new DPs is the same or markedly different from the less famous Designated Players of the past.