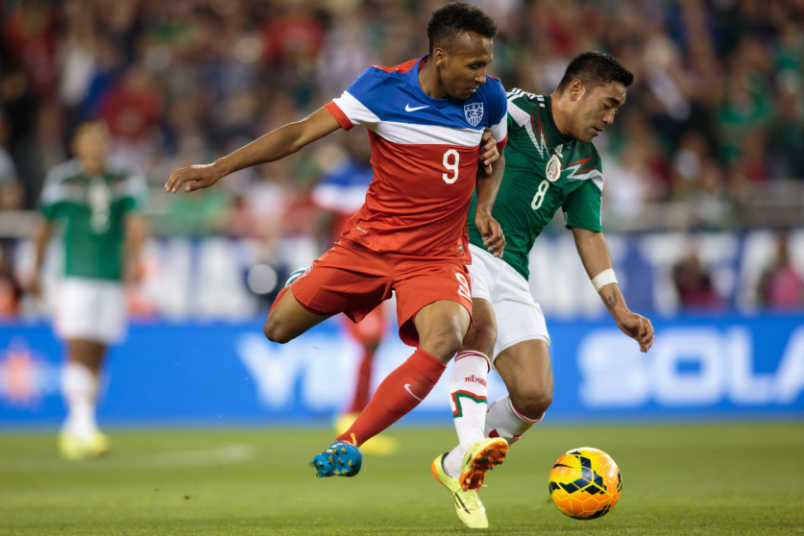 By Luis Bueno – RIVERSIDE, CA (Feb 6, 2019) US Soccer Players – The more MLS grows, the greater the caliber of player that comes to the league. That much has been evident for the last decade-plus. The league will take another step forward, though, when larger numbers of Mexican internationals consider this league a viable option. MLS may soon take another step in that direction.

Since the inception of the league more than two decades ago, Mexican soccer fans have looked down on MLS. While the league has developed and progressed over the years, MLS is still not considered a top option for Mexico’s elite players.

Fabian could help change that. If he succeeds in the way that compatriot Carlos Vela has, it could open more doors by giving promising Mexican youngsters a landing spot outside of Liga MX and much closer to home than the Old World offers.

Giovani Dos Santos was the first prominent in his prime Mexican to take the leap and join MLS in this part of the league’s history. Other Mexican internationals have called MLS home, of course, like Luis Hernandez and Cuauhtemoc Blanco. Dos Santos’s move was a bit of a splash because he was playing in a top-flight European league and had European suitors. Instead, he opted for MLS. Younger brother Jonathan joined the Galaxy while Vela took up residence across town prior to the 2018 season.

The trio has had varying levels of success. Neither feast nor famine has kept the players from making Mexico national team rosters for important games or tournaments. That’s a clear message for El Tri players.

Mexican internationals would be wise to consider MLS an option whether they are based in Europe or not. Perhaps with Fabian joining the league more of his national team teammates will want to follow suit.

Fabian finds himself in a bit of a quandary. He has struggled for playing time in the Bundesliga. He has played in just one game all season, a 63-minute outing against Borussia Dortmund on September 14. Perhaps a teenaged prospect would be fine with that, but Fabian is long past the days where higher-level training sessions are good enough. Fabian needs to play. The Bundseliga is not offering him a chance at first-team minutes.

Philadelphia offers that much. The Union has two Designated Player slots open and Fabian would surely command such a salary. They need a playmaking midfielder as Borek Dockal was one-and-done with the club, opting instead for China after his 18-assist season from 2018.

Fabian, who turns 30 this summer, would join Alejandro Bedoya as a DP on the roster. The Chivas Guadalajara product made a strong move to Germany during the 2015-16 Bundesliga campaign. Fabian is a veteran of two World Cups and was part of Mexico’s gold medal-winning side in the 2012 Summer Olympics as well. Fabian will be 34 by the time the next World Cup is here and new El Tri coach Tata Martino may turn to younger options.

Playing in MLS will not hurt his chances for making any Mexico roster. Giovani Dos Santos made the 2018 World Cup roster despite having poor showings for the Galaxy. Vela and Jonathan Dos Santos also made Mexico’s roster for last summer’s tournament. Vela even seemed to catch Barcelona’s eye with his play in this league, though a proposed loan deal didn’t happen.

MLS has gained some respect from onlookers south of the border but many still consider it a step down from Europe. While it is true that MLS is not at the caliber of the Bundesliga, it is a strong and competitive league. A move would be progress instead of a regression.

Dos Santos received harsh criticism when he left Villarreal for the LA Galaxy in the summer of 2015. Many saw that as an indication that he was only interested in a paycheck instead of trying to challenge himself at the highest level. Vela though was not seen as having the same desire for chasing the money when he opted to join expansion LAFC ahead of the club’s inaugural campaign. Perhaps in that short amount of time, perceptions changed. Players like Fabian now get the benefit of the doubt that they are making the move to further their careers.

Another move made by an MLS club could also help promising Mexican youngsters wanting to play in MLS. Atlanta United star Miguel Almiron moved to Newcastle United last month for an MLS-record $27 million fee. After all, if MLS was truly a step down, a player like Almiron would not have joined the league at all nor would he have fetched that kind of money from a Premiership club.

Instead, all Almiron did was join MLS on a fee, stand out for two seasons, and parlay that to a move to a bigger league. A blueprint like that could have been something a Mexican youngster, say Diego Lainez, could have followed. Lainez fetched some $14 million from Spanish side Real Betis, which is a solid move. Perhaps some time in MLS could have helped him move across the pond on a greater transfer fee like Almiron’s.

Regardless, Fabian’s potential arrival in MLS signals a positive step forward. It’s a sign of the league’s continued evolution. If he can help break barriers that have long existed, then his compatriots will be better off for it.