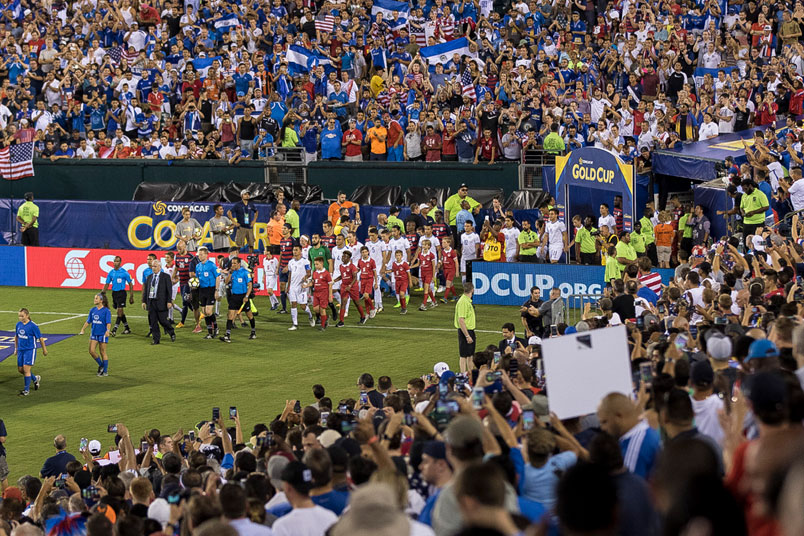 By Luis Bueno – RIVERSIDE, CA (Feb 20, 2019) US Soccer Players – The World Cup is the most important tournament in soccer. It is the pinnacle of the international game. It stands above all of the other tournaments on the soccer calendar. That doesn’t downplay the importance of those other tournaments. They’re important and necessary in the build-up to and preparation for the World Cup. Well, until world soccer decides that they aren’t.

The FIFA Confederations Cup, held every four years the year before the World Cup, is likely on the way out. For those nations on this side of the world, no Confederations Cup means the Concacaf Gold Cup takes on a greater significance. A continental shift is upon the world of international soccer. The first plate to move is the likely fall of the Confederations Cup. The next one will be the rise in importance of the Gold Cup. All are results of what’s happening with the World Cup and FIFA’s broader plans.

For years, international soccer in this region has followed the same routine. World Cup, then the Gold Cup the next summer followed by the early stages of World Cup qualifying. Then there’s a near-soccer overload with the the Gold Cup and Confederations Cup dominating the summer with the Hexagonal stretching across that particular year. Sprinkle in tournaments from outside the confederation as well as youth and women’s events and that pattern has been the norm.

Take the Confederations Cup out of that and it may seem to be just a small perhaps even insignificant move. Certainly to Panama, Honduras, or Canada, having no Confederations Cup means nothing to those teams as they likely have no chance of making it to such an event. It does mean that the Gold Cup now becomes the preeminent tournament for all Concacaf nations while the new Nations League works itself out. FIFA has an eye on that as well, moving to create a global nations league. The idea is that it would be more important than the Confederations Cup while slotting in underneath the World Cup.

The Confederations Cup news forced Concacaf to double down on the Gold Cup. That was clear with Concacaf’s response to US Soccer president Carlos Cordeiro. In comments from US Soccer’s annual general meeting, Cordeiro put the future of the Gold Cup in doubt after confirming the end of the Confederations Cup. Concacaf responded quickly and decisively. They made it clear that they’re “fully committed to the Gold Cup, confirming that the 2019, 2021 and 2023 editions are part of the FIFA Calendar. Additionally, once the new FIFA calendar is produced after 2023, CONCACAF will continue organizing the pinnacle event of our confederation.”

Now, the Gold Cup traditionally has been an entertaining tournament with some areas of concern. Without the Confederations Cup, the Gold Cup must evolve to better suit the needs of the participating nations. This is happening alongside the Nations League, a tournament that provides a similar answer as the Gold Cup. Who is the best team in Concacaf?

Perhaps the largest drawback to the Gold Cup is the made-for-dollars feel it has to it. Mexico and the United States regularly end up in groups designed for them to only meet in the final. A USMNT vs Mexico final is the best possible matchup as it generates the largest crowds, the most ratings, and the greatest intrigue. That should happen organically. Instead, Concacaf takes steps to manufacture it.

There should be no more pro-Mexico crowds. Or, rather, placing Mexico in cavernous NFL stadiums where Mexico will likely sell out to the tune of 70,000-plus. Mexico already has an advantage over other nations due to its tradition and talent. Where Mexico does not need help is in crowd support. Yet Concacaf graciously rolls out the red carpet for Mexico every time out.

One Gold Cup trait that was a drawback before though is now a positive. Having the Gold Cup every two years did not make much sense as it seemed like international soccer overload. The edition played before the World Cup seemed more like a second-rate event as most of the big nations sent their junior varsity teams to compete.

With no Confederations Cup dangling in front of the potential winner now, the reasons to not focus on that particular year’s tournament diminishes. In previous years, the Concacaf representative that reached the Confederations Cup had a valid reason to not send its strongest team to the Gold Cup. It is unrealistic to expect a team to send two full-strength squads to two tournaments in the same summer.

At might even have been understandable for teams to not want to place undue emphasis on the Gold Cup while in the throes of World Cup qualification as well. After all, winning the Gold Cup is great but a far second to successfully guiding a team through World Cup qualifying. Usually every other Gold Cup has come in the middle of the Hexagonal. Most teams have typically still been alive at that stage. So giving some key players a rest or testing out youngsters or otherwise unproven players on the international stage for possible use as reinforcements down the stretch in the Hexagonal was a reason to not take a full-strength squad to the Gold Cup. For most teams, that made sense.

That too will likely change for upcoming World Cups. The World Cup will eventually expand from 32 teams to 48 teams. While the tournament seems perfect at 32 teams, the powers that be seem poised to dilute the tournament by welcoming 16 more nations to the world’s greatest sporting spectacle.

While opening the doors to more nations, that dilution of the World Cup will all but eliminate the drama, intrigue and pressure of World Cup qualification for CONCACAF’s elite. All that means is the Gold Cup will become even more important. This summer is the first edition of the expanded Gold Cup, moving to 16 teams. That’s part of Concacaf’s goal to include more of its membership, one of the motivations for the Nations League. How that works is another open question. Add it to the long list asked across world soccer.

As international soccer’s plate tectonics move and shift and create a new-look landscape, Concacaf has an opportunity. Going all in on the importance of the Gold Cup creates what they’ve always wanted. A marquee event completely under their control.