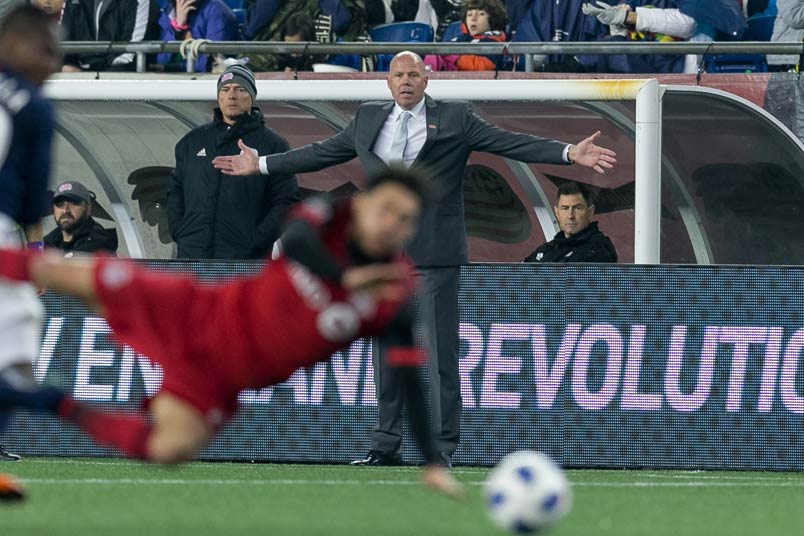 By Jason Davis – WASHINGTON DC (Feb 15, 2019) US Soccer Players - No Major League Soccer club has teased its supporters more over the course of 23 seasons than the New England Revolution. One of the league’s original franchises, the Revs are a study in coming up just short with potential that never reached fruition. As far as identities go, it’s not a great one to own. It’s going to take a lot of progress, in numerous areas, for New England to shake it.

No team in MLS history has finished runners-up more time than the Revolution. On five different occasions, most recently in 2014, New England fell at the final hurdle. That sort of near-miss record speaks to a certain level of success for the club, but no one celebrates teams for almost winning a championship.

Losing five MLS Cup finals is more mark of shame in the minds of fans than a point of pride. No one forgets the champions of the past, but it sometimes takes a few minutes to recall the team that they defeated for their title. The Revs only added to the pain of 2nd-place status by losing two of those finals in extra time and a third on penalty kicks.

Perversely, it might be easier to take if New England had been on the wrong side of routs in those MLS Cup finals. It’s a trick of the psychology of sports fans that losing by a narrow margin feels worse than the alternative. The cumulative effect of those losses means that expectations never rise very high in Foxborough, lest the disappointment follow.

Adding to that is the feeling that the league moved on without New England. Spending is now the driving force for success in MLS, and that rarely describes the Revolution. 2013 might as well be ancient history by MLS standards for all the Revs’ achievements in that season say about their ability to compete for the top spot now.

It’s not that the Revolution lack resources. Robert Kraft and his family are capable of dramatically increasing their investment in the soccer team. The success of the NFL Patriots, Super Bowl winners for the sixth time since Kraft purchased the team in 1994, stands as hard proof that the possibilities are there.

There’s the lack of championships on the field, but the club’s slow move to keep up with the changing nature of running an MLS team connects directly to its stadium. That means New England’s quest for a proper soccer home is just as big a source of frustration for the club’s faithful.

We're past the era of sharing a massive NFL stadium far from the city center. Even if it's the home of the NFL champions, the stadium is the most outward sign that MLS moves on. A tough thing to swallow for any fanbase, it’s especially frustrating in a region that has all the hallmarks of a possible MLS hotbed. It doesn’t take much imagination to see New England, playing in Boston on public transit lines, exploding into one of the most well-supported teams in the league.

The demographics are a perfect fit. Soccer’s younger fan base and the varied ethnic character of Boston would provide the Revolution with energy and passion in the stands at levels equal to or better than anything seen in MLS. For now, the wait for the stadium remains the same. It's just on the precipice of a possible breakthrough with no confirmation of a plan. Whispers that the Kraft family is getting closer to finally cracking the code of securing a plot big enough for a stadium somewhere on the T line in Boston abound, but nothing official is in the public sphere.

While the stadium quest continues, the team is trying to claw its way back into the Eastern Conference’s upper echelon under second-year head coach Brad Friedel. Competing means spending. It also means maximizing the type of player the Revolution is able to attract. The stadium situation in New England doesn’t just impact fans watching soccer on artificial grass in a stadium that swallows up their attempts to create an atmosphere. It repels possible signings because of those exact factors.

Right now, the Revs are rebuilding. Friedel pointed to the roster makeup as a problem in 2018, declaring that “a changing room that was 90 percent someone else’s signings” affected his ability to know the players and hurt camaraderie across the team.

Additions this winter include a pair of Homegrown players in Nicholas Firmino and Justin Rennicks, fullback Edgar Castillo, Colombian forward Juan Fernando Caicedo, and Spanish playmaker Carles Gil. Caicedo is 29-year old who has spent the vast majority of his career playing in Colombia and will provide depth behind last year’s leading goalscorer, Cristian Penilla.

The real prize of the list is Gil, a 26-year old midfielder who transferred in from Deportivo La Coruna. Gil is not a household name. The reported fee of $2 million won’t garner much attention in the new MLS, but he is a potential upgrade in an area that proved tumultuous last year.

The Revs shipped Lee Nguyen to LAFC following Nguyen’s trade demand and traded Kelyn Rowe to Colorado this winter. We can only assume that Gil is a better fit for Friedel’s system, or at the very least won’t carry the same sort of baggage into his relationship with the coach.

It wouldn’t be the Revolution without a lingering tease, though. At a season ticket-holder even on Wednesday, Friedel dropped a hint about another signing. Describing the player as an “elite overseas” player, the head coach declined to identify a position. Friedel’s contacts in Europe, he said, would “hopefully” bring the player in very soon.

For a team with a history like New England’s making a promise of an elite signing is no small thing. The word is imprecise but still comes with expectations. When MLS teams are securing the transfer of South America’s reigning player of the year and making $10 million offers, the bar is extremely high.

No one can fully believe that the Revolution are stepping onto the stage raised by Atlanta and Toronto because they’ve never shown the appetite to keep pace before. Is this the season when that changes?