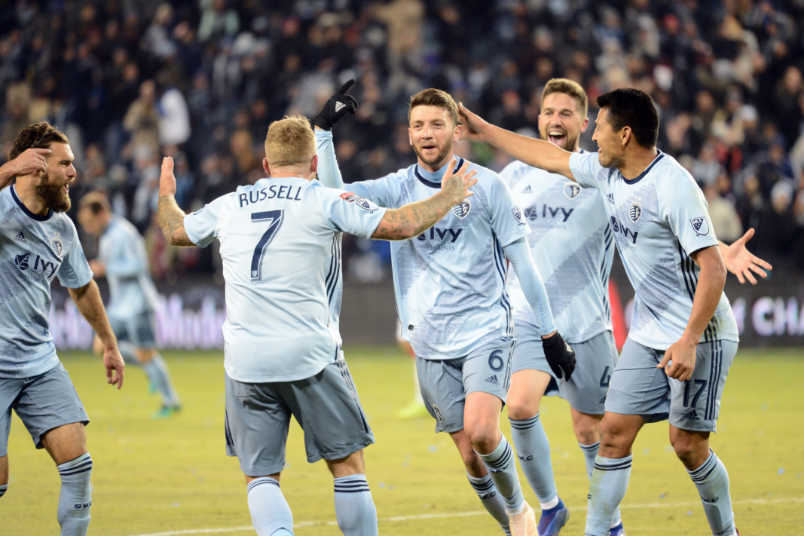 By Charles Boehm – WASHINGTON, DC (Feb 22, 2019) US Soccer Players – For many years, the United States and its teams and players reliably wore tags like “underdog” and “up-and-comer.” This was a soccer backwater finally growing into a contender after years in the wilderness. Even though the US was and is a superpower almost every other facet, those labels fit in a country where several other sports dominated the conversation.

Lately, we’ve been learning that you don’t have to climb all the way to the top to become an inviting target to those below. As weak as some outside the region see Concacaf, World Cup qualification is far from guaranteed at any age level of the national teams. Even without winning the thing in 10 years of trying, MLS teams have now become Goliaths in the Concacaf Champions League, at least in the eyes of the Davids dotting the much smaller countries across Central America and the Caribbean.

Atlanta United and Toronto FC are the latest northerners to find themselves on the wrong side of this fable. On Tuesday the reigning Canadian champions, historic MLS treble-winners not so long ago, suffered a stinging 4-0 upset at the hands of Panama’s Club Atletico Independiente in this year’s CCL curtain-raiser. Six USMNT or USMNT-eligible players were in TFC’s starting XI on a night when just about everything went wrong in the muggy tropical air of La Chorrera, Panama.

Later that same night, a clutch late goal from the ageless DaMarcus Beasley helped the Houston Dynamo avoid a similar fate in their CCL road game against Guatemalan side Guastatoya. A night later the New York Red Bulls made easy work, 2-0, of Atletico Pantoja in the Dominican Republic. That result was slightly more reflective of how these sharks-and-minnows matchups are expected to go.

Sporting Kansas City, like RBNY a cohesive group with a clear identity, showed their experience with a very impressive 3-0 home win over Liga MX strugglers Toluca on Thursday. That was the prelude for probably the most keenly-anticipated game of this CCL round, the international debut of the reigning MLS champs Atlanta. Things did not go well for the vaunted Five Stripes in Costa Rica, disjointed 3-1 victims of a lively CS Herediano.

Tabulate the five results, and you see two of MLS’s most expensively-assembled squads, who also happen to be the past two MLS Cup winners, struggling the most. TFC and ATL are the league’s most recent role models, raising the bar in their own particular ways. So followers of the league may feel a bit stunned at the sight of them getting so soundly beaten by relatively unglamorous Central American sides.

Put simply, this is the allure of international competition. This is why Concacaf World Cup qualifiers stir the imaginations of soccer fans across the region. This is why even the US and Mexico, giants who dwarf their neighbors in size and wealth but are still upset by Cinderellas now and then, can’t assume anything around these parts. This is the same cocktail of passion, culture, and conditions that make the UEFA Champions League and Copa Libertadores tournaments so beloved not only on their continents but around the world.

It’s the truest measuring stick. It’s the high-stakes collision of playing styles, cultures and communal identities. When you’re representing not only your club but your city, your state, even your entire nation, there’s no place to hide. There’s no “apples to oranges” excuses here.

“We understand the responsibility that we have,” said coach Francisco Fran Perlo of Independiente, the team that beat Toronto, in regard to his team’s first-ever foray into CCL. “It’s the highest honor, being the sole representative of the country in the tournament. It fills us with pride. We know what we are playing for. It fills us with hope and faith.”

American soccer, and later MLS, spent a good chunk of its history in isolation from the world, an experimental sort of cul-de-sac that had no choice but to play by its own rules and create its own biosphere. The rules are different on the frontier, and that’s exactly what we were in the world’s game. The biggest milestones on the road to respectability carried with them that delirious feeling of catching up to, then surprising established powers. Now that we expect more, there’s more to lose.

A similar dynamic plays out under the brighter, harsher floodlights of UEFA’s Champions League, the most rarified air in world soccer. Across the Atlantic, a handful of US and Canadian players have made their way to this elite level over the decades. In the process, they show us both what is possible and how difficult it is to reach, then remain at the sport’s peak.

Two prominent Americans have reached this year’s knockout stages, Weston McKennie and Christian Pulisic. Both were handed key roles by their respective clubs, Schalke and Borussia Dortmund, in the UCL round of 16 action that unfolded over the past two weeks. Both worked industriously, only to suffer not only gut-wrenching defeats but hamstring injuries that put their availability for next month’s international matches in question.

Again, this is the world standard. It’s the best soccer in the world, a cutthroat arena that offers its participants priceless, though often painful, lessons. There’s no better place for these young players to test themselves. The strength and quality displayed by their foes Manchester City and Tottenham Hotspur should remind Americans how far there is to go to reach the places we want our players and our game to be.

“We showed we can match a team like Manchester City. We had some good spells of possession, made some chances and put everything into it,” said McKennie after Schalke’s riveting, seesaw 3-2 loss. “But we should have won this game or at least drawn it.”

Lessons like the ones handed out to Atlanta and Schalke hurt. So much so, in fact, that many in American soccer would just as soon not have to deal with them. That’s why MLS’s history in CCL is marked not only by heartbreaking defeats, but also coaches and teams punting on the competition. Whether you’re getting overwhelmed by the planet’s richest, most stacked squads or upset by underrated upstarts, setbacks in international play can leave you feeling hopeless.

These feelings should prompt us to bear down, not throw up our hands. The tribulations of the last World Cup cycle taught us that. It’s not fun to get that reminder of how far North American soccer has to go. But that’s the priceless value of the Champions League experience.