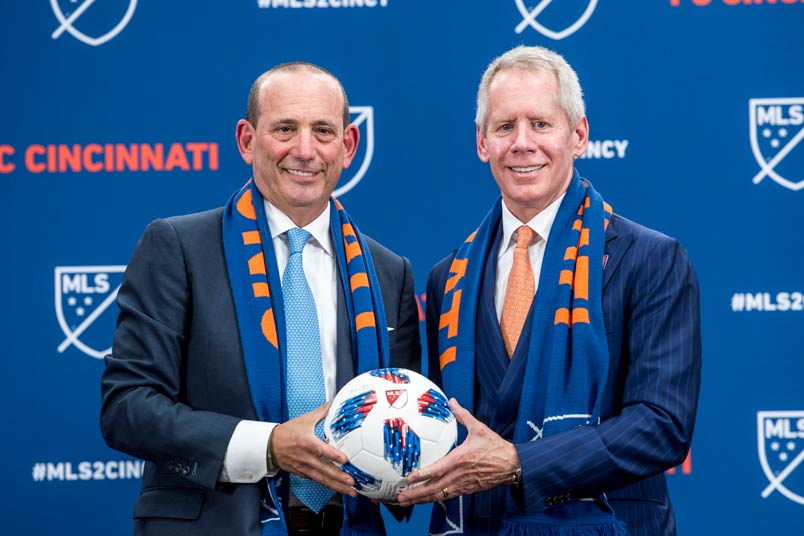 By Jason Davis – WASHINGTON DC (Feb 13, 2019) US Soccer Players – There’s plenty to pick from if you’re looking for something entertaining out of the Major League Soccer offseason. The kickoff to the 2019 campaign is less than a month away. The league’s chattering class has more than enough to talk about as clubs race to get their business done. It might take a deep interest in MLS to understand all of the implications of swirling TAM, GAM, and DP-level contracts. That doesn’t mean that the hardcore supporters are the only ones finding entertainment in the churn of news.

Toronto FC proved a major source of offseason drama with the sale of Sebastian Giovinco to Saudi Arabian side Al-Hilal this month. Giovinco’s contract discussions turned ugly. When Giovinco turned to social media to paint the failure as TFC’s and not his own, it sparked an uproar. with Giovinco already playing for Al-Hilal, Toronto moves on.

The matter of he said/they said will quickly be forgotten if the club secures a replacement for Giovinco. Giovinco’s departure might have been a bit too acrimonious for anyone’s liking, but he is 32. With TFC’s resources, signing a younger player to take up the forward’s creative mantle before the beginning of the season is more than possible.

Because TFC has the Concacaf Champions League looming next week, there’s significant pressure. The club needs to move now if it wants to include a new signing in the squad that will face Independiente of Panama starting next Tuesday. It’s not only Giovinco’s production. It’s also attacking midfielder Victor Vazquez. Toronto sold Vazquez in what now seems like a questionable move to Qatari side Al-Arabi back on January 15.

Aiming for a high quality of player to help fill holes left by Giovinco and Vazquez while also trying to expedite a signing isn’t easy. Toronto FC is finding that out in their chase for Spanish midfielder Alejandro Pozuelo.

Pozuelo is a 27-year old currently under contract with Belgian club Genk. Like for most European leagues, the incoming transfer window closed at the end of January. That fact may have lulled Genk into a false sense of security over Pozuelo, the leading scorer on the team midway through the domestic campaign and into the Round of 32 in the Europa League. Major League Soccer’s newfound engagement with the international transfer market will put them into direct conflict with clubs already moving into the second half of their seasons in Europe.

Toronto’s offer for Pozuelo met the release clause in his contract, an amount Pozuelo himself said publicly is around €8 million. What’s happening now is eerily similar to the drama that consumed TFC over Giovinco’s move to the Middle East. Pozuelo wants to make the move to Canada and MLS, while Genk wants to hold onto their player. The latest twist had Genk publicly announcing that Pozuelo declared his intent to stay with the club until the summer, followed by Pozuelo announcing that Genk “forced” him into said agreement.

It’s hard to blame Genk. The club, aside from their Europa League dreams, sits in first place in the Jupiler League with a shot at a title for the first time since 2011. Pozuelo is their creative engine and best player. Losing him might be a death knell to their championship aspirations. The club is pulling out all the stops to hold on to Pozuelo, perhaps running afoul of the law in the process.

Pozuelo said directly that he intends to take legal action to secure his move to Toronto. Whether that action happens soon enough to make the move worthwhile for TFC, a club under the gun, remains to be seen.

A note on the reported fee for Pozuelo. At more the $9 million per current exchange rates, the price would rank among the most ever paid for an incoming MLS transfer. Though records are somewhat murky due to the league’s reticence to disclosing transfer feeds, reports indicated that NYCFC’s move for Alexandru Mitrita just last week was the third most expensive transfer fee ever paid by one team. Atlanta United paid the top two fees for incoming players, Ezequiel Barco in 2018 and Pity Martinez this season. If there was any doubt that a new era of MLS spending is upon us, the last month should put those doubts to rest.

While Toronto FC was swimming in the international transfer waters, the newest club in MLS was dropping its first-ever jerseys ahead of its first-ever season.

FC Cincinnati’s new look went over well enough. The club did admit that the accelerated timeline between admittance as an MLS expansion franchise and its inaugural season presented a few problems. Not only will fans not be able to purchase the “authentic” version of the first jersey, but FCC’s own players also won’t be wearing it on the field. Rushing has consequences. For FC Cincinnati, those consequences included getting only “replica” jerseys in year one.

Rushing also impacted the club’s efforts to put together an MLS-caliber team for 2019. Signing so many USL players is likely as much a function of the compressed timeline as anything. FC Cincinnati is more unwilling to charge headlong into foreign signings than it is unable to spend the money necessary to attract them.

That doesn’t mean there are barriers to those signings for a club in a less-than-well-known part of the United States. FCC’s plight is similar to that of Sporting Kansas City. Sporting built a perennial playoff team and MLS Cup contender in spite of the disadvantage of geography.

Kansas City coach Peter Vermes spoke about that problem with SB Nation when covering the way his club spends on players. Vermes made it clear that the hardest part in selling a player on Sporting is getting them to come to Kansas City in the first place.

That reality is not insurmountable, but it’s worth considering when parsing the way FCC prepared for 2019. The news on Tuesday was that the club signed former Vancouver Whitecaps and Columbus Crew winger Kekuta Manneh from Swiss club St Gallen. Manneh is a known MLS quantity, will probably come cheap, and is still young enough to be a future asset at 24. The sales pitch is minimal for a player with a background in MLS.

FC Cincinnati’s approach doesn’t suggest obvious success in year one. We’ll have to wait on the returns before judging a team swimming upstream in the most fraught era for squad building in MLS history.