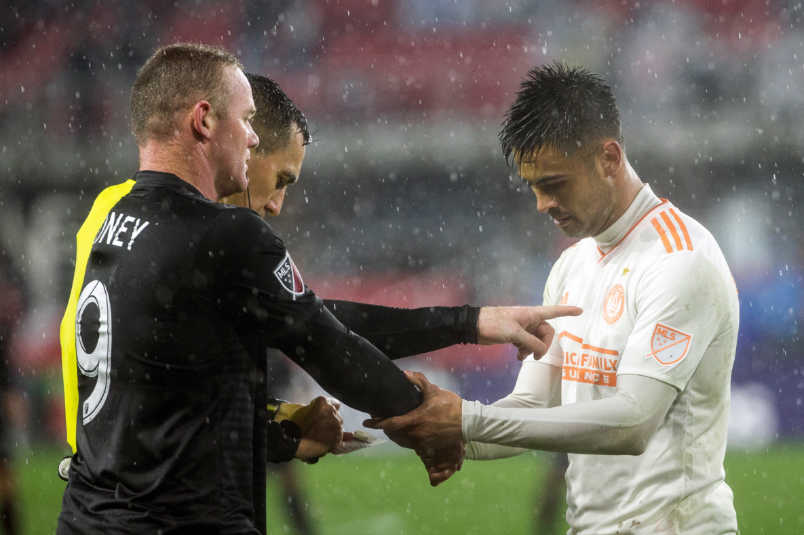 By Jason Davis – WASHINGTON, DC (Mar 6, 2019) US Soccer Players – While every single MLS club made changes to its roster in the offseason, some turned over the personnel list more than others for 2019. For a few, the winter was not just about signing a few potential starters and adding to depth, but by the acquisition of high-priced talent.

Despite the impact of Targeted Allocation Money and the rising number of seven-figure salaries, Designated Player signings still dominate the news cycle. DPs come with big contracts, but they also carry big expectations. Week 1 of the 2019 MLS season provided the first opportunity to see if those big money players will live up to their paydays.

Toronto’s Alejandro Pozuelo will likely debut this coming weekend, not arriving in time for the first game of the year. That just means that there’s still anticipation to be had.

Let’s take a look at the first impressions of the offseason’s top signings and identify a couple of late arrivals who will be dropping into MLS in short order.

The third-most expensive signing in league history when NYCFC bought him from Universitatea Craiova of Romania, Mitrita was an off-the-radar pickup for a club looking to replace the attacking productivity of the legendary David Villa. Obviously, Mitrita is no Villa. Without Villa’s pedigree, Mitrita will have to convince fans in New York that he’s worthy of picking up the mantle from the club’s best-ever player. The first chance to do that came against Orlando City on opening day in Florida.

Though NYCFC dropped two points when Orlando City executed a comeback from a two-goal deficit, Mititra’s day was productive. He showed off his skill with the ball, specifically with setting up his teammates. Mititra collected an assist on Alex Ring’s goal and hit a lovely outside-of-the-right-foot pass that should have ended up a goal with New York City up 2-1.

Deployed on the wing, Mitrita was also guilty of turning the ball over on a couple of occasions and exhibited a questionable touch. The performance was good enough to provide hope that he’ll be a major part of NYCFC’s success in 2019, even with the large shoes he’s asked to fill.

On the other side from Mitrita was a player with an impressive resume making his first appearance for the Lions after joining late in the preseason. While Mitrita is a gamble because he hasn’t yet proven himself at a high level, Portuguese winger Nani is a risk because of the salary he demands and the significant mileage on his legs.

Nani didn’t start for Orlando against NYCFC but made his presence felt after entering in the 70th minute. His pass for Dom Dwyer allowed Dwyer to turn and fire a perfect cross for Tesho Akindele, who scored Orlando’s equalizer. Nani’s performance would probably look even better if referee Baldomero Toledo had awarded a penalty on Maxime Chanot’s late handball in the box.

A full debut will give us a better idea of how coach James O’Connor plans to use Nani. Managing his minutes will be a part of his 2019 story. The initial returns show that Nani’s obvious talent will be a boon to the Lions.

Another DP signing who only played a substitute role in the first MLS game of the season, Atlanta’s Pity Martinez was actually making his third appearance for his new club when he entered in the 59th minute against DC United.

Whether it was fatigue, the brutal weather in Washington, or United’s plan to slow down the talented Argentinean, there were limits for Martinez in his MLS debut. He managed to get close to 50 touches of the ball in just more than 30 minutes and completed two-thirds of his passes.

Atlanta’s loss to DC United had little to do with Martinez. However, the nature of his high profile transfer from River Plate and the high bar set by the defending MLS Cup champions means he’ll have to contribute assists and goals right away. Next week Atlanta will face FC Cincinnati at home, a prime opportunity for Martinez to show his abilities for his new American fans.

Lost among the high seven- and eight-figure moves for players this offseason was the Revolutions signing of Spaniard Carles Gil. A creative midfielder who spent the last two seasons with Deportivo La Coruna, Gil joined MLS to improve the Revs attack under head coach Brad Friedel. The choice to move on from the era of Lee Nguyen and Kellyn Rowe facilitated the need for a player to make New England in the opponent’s end of the field. Gil was a record signing for New England at a fee of more than $2 million. He’ll be at the center of everything good in 2019. In his first MLS appearance, Gil helped the Revolution grab a road point against FC Dallas in Frisco with a second-half goal. Beyond the tally, Gil totaled three shots and made two key passes. Coming in match fit from Europe, it stands to reason that with a bit more time to adjust Gil will be a very good addition to the New England attack.

Gil wasn’t the only new DP to score in his first game, though Mexican midfielder Marco Fabian’s goal didn’t lead to any points for his new team. Fabian’s second-half penalty served as mere consolation in a defeat to Toronto FC on the opening weekend.

Philadelphia was far from poor but an inability to create good chances and finish those they did have led to a loss. The mix in the midfield is a work-in-progress for the Union, a team still working out the mix of veterans-to-youth under a new GM and head coach Jim Curtin.

The signing of Fabian was a watershed moment for the Union. The history of the club is spendthrift. Though they did not pay a transfer fee for the Mexican attacker, the salary outlay for Fabian represents a bit more in the way of ambition. It will help encourage the club’s ownership to spend even more and help make the club more competitive if Fabian comes good and the team succeeds at a higher level in 2019.

Unlike the player above, new Minnesota United midfielder Jan Gregus isn’t expected to score goals or even assist them. A deep-lying passer playing as part of a double pivot with Osvaldo Alonso, Gregus’s contributions to the Loons aren’t likely to be obvious. If he completes passes at a high rate, adds a few defensive interventions, and occasionally pops up in threatening positions, his performances will be successes.

In his league debut for Minnesota against the Vancouver Whitecaps, Gregus did mostly those things. He completed 93 percent of his passes, added one key pass, lost the ball a pair of times, and provided the platform in tandem with Alonso that allowed Darwin Quintero and company to thrive.

Minnesota United went from no Designated Players in a season-and-a-half to three by the start of 2019. Gregus is the third. Though he won’t be the flashiest of the bunch, his play is just as important to the Loons as Quintero and Angelo Rodriguez.