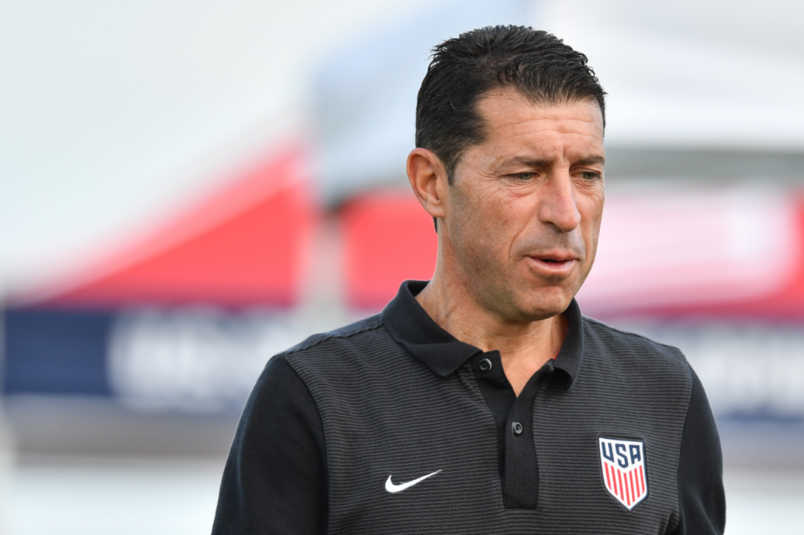 By Charles Boehm – WASHINGTON, DC (Mar 1, 2019) US Soccer Players – Do you commute to an office to perform your job, or work from home? Does the location of work affect your choice of residence? How do you find that elusive work/life balance?

For most Americans, these questions are part of everyday life. We spend lots of time and resources reconciling where we want to live with where we have to work. As it turns out, elite athletes and their leaders sometimes have to take the bigger picture into account, too.

Despite a good run of recent success across multiple age groups, US Soccer is presently facing a staffing crunch in its youth national team system. The Under-18, U-17, U-16, U-15, and U-14 national teams are currently lacking head coaches. Arguably the most important level among that group, the U-17s, have the qualifying tournament for their World Cup looming, their first game set for May 2.

As Soccer America’s Mike Woitalla documented in detail two weeks ago, some of these vacancies have been open for some time. Three of those five have been empty for more than six months, requiring interim coaches or temporary reassignments of others already on the payroll.

It’s not that the Federation has been slacking on this front. They’ve conducted interviews with a range of candidates and apparently continue to do so. This week a source told USSoccerPlayers.com that the most urgent of the bunch, the U-17s job, has been narrowed to two finalists and should – should – be filled soon.

“We have continued the interview process for the Under-17 job and [are] hoping that someone will be named very shortly,” said U-20s head coach and USSF youth technical director Tab Ramos in a media conference call after FIFA’s U-20 World Cup draw in Poland last week.

That’s cutting it close just the same. Last year Ramos spoke of the negative effects of a hiring freeze imposed by federation officials after the USMNT missed out on the 2018 World Cup, but that policy reportedly ended in August. Then there’s the elephant in the room. The Fed’s new policy to gather as many of its staff members at Soccer House, its Chicago headquarters, as possible.

It’s worth noting that Ramos and USWNT coach Jill Ellis aren’t living in Chicago. Insiders acknowledge that the new requirement is a stumbling block in filling the YNT openings so far. USSF leaders remain committed to clustering everyone under one roof, even as the search for those new hires drags on. One source told me the current bare cabinet is seen as merely “a moment in time” that won’t drag down the big-picture goal of a stronger overall workforce.

It remains to be seen whether this more collaborative approach will shift the norms among the YNTs, where the teams’ head coaches have typically been granted wide autonomy in operating their particular squads. Ramos said his preparations and logistics for the U-20 World Cup in May and June have not been affected by the staffing issues.

“It shouldn’t have any effect. Only because in the past, even when we have full national-team coaches in each age group and we have a head coach in each age group, we help each other out,” he said. “But everybody’s sort of in charge of their team and gathering their own staff. So fortunately I’ve been in the game a long time and I usually ask for help from outside of our own staff as well, guys like Brian Bliss or Curt Onalfo, guys that have a lot of experience in MLS and in the professional game. And they always come and contribute and I think this time it will be the same.”

Ramos is one of three people leading the YNT hiring process, along with chief sport development officer Nico Romeijn and chief soccer officer Asher Mendelsohn, who arrived with Berhalter. As with other aspects of its technical programming, the Fed seems keen to implement the lessons of the Jurgen Klinsmann era and the subsequent, though ultimately brief, second stint of Bruce Arena in charge of the national teams.

Klinsmann often sought to break down internal silos and get leaders from multiple USSF departments in the same room for cooperative purposes. That often reaped benefits. Conversely, he also showed an individualistic streak that made life difficult for his federation colleagues more than once, acting on his own with the substantial powers granted to him. That, too, is something the fed wants to learn from by spreading both power and responsibility across wider groups of decision makers.

The issue so far is that coaches have existing lives and livelihoods, whether it be spouses’ careers, children’s school situations or side businesses like youth clubs and camps. USSF has sought to be reasonable, but now wants to draw a line. By doing so, are they building a stronger organizational culture, or needlessly excluding top candidates who can’t or won’t relocate to the Windy City?

Even Soccer House is not a perfect setup. It lacks fields or training facilities like many of its counterparts overseas in countries where it’s easier to centralize infrastructure and personnel. In the future, the development and construction of a national training center (or centers) could lead to another round of geographic consolidation somewhere other than Chicago. That’s worth remembering for those wondering why federation president Carlos Cordeiro is so keen to grow the organization’s budget well beyond its current financial reserves.

With most coaching jobs, it’s a given that a new hire must move to wherever the club or academy is. With players, events, and locations scattered across an enormous country, US Soccer has always been an exception. The long-running youth national team vacancies speak to a determination to change that. The year ahead should reveal to us whether it all works out in their favor, or blows up in their face.