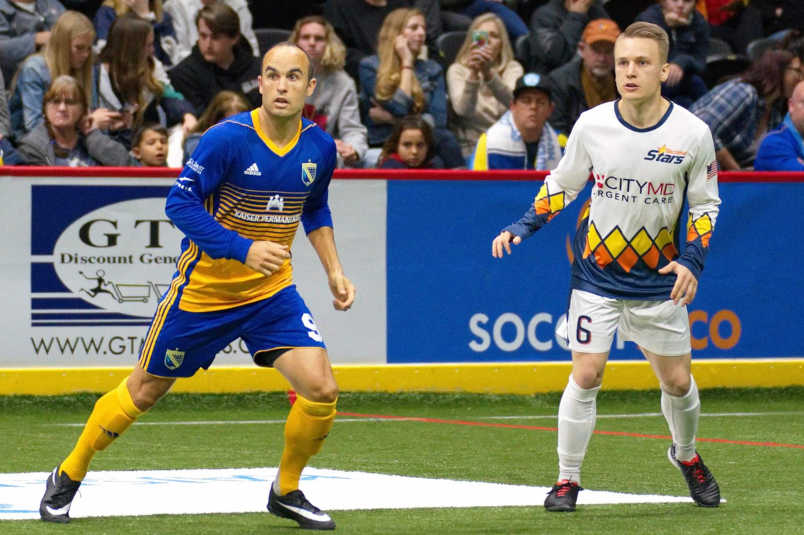 By Clemente Lisi – SAN DIEGO, CA (Mar 4, 2019) US Soccer Players – For a brief moment, Pechanga Arena San Diego has the ability to transport you back to the 1980s. That was a time when indoor soccer was king and the San Diego Sockers were the best team in the country. Originally a franchise that competed in the outdoor NASL, the Sockers would go on to win 10 MISL titles under legendary coach Ron Newman and superstars like Julie Veee, Branko Segota, Kevin Crow, and Brian Quinn.

Three decades later, a lot has changed to this country’s soccer landscape. For San Diego, their beloved Sockers remain a staple and one of the winningest franchises in American soccer history. The team now plays in the Major Arena Soccer League, the newest incarnation of a pro indoor circuit that dates back to 1978 when playing on fake turf and a hockey-sized field captivated the country.

Like the Sockers of old, this latest incarnation continues its winning ways. One of the newest reasons for all the excitement? Former US National Team and MLS star Landon Donovan.

With Michael Jackson’s “Beat It” blaring from the loudspeakers during Friday night’s game against the Turlock Express, the feeling that time travel was a possible appeared to become reality. The arena was buzzing and Donovan jerseys were everywhere. With $10 tickets and $2 Bud Lights to entice fans into the arena, the game featured all the trappings indoor fans enjoy – blaring music, balls careening off the boards, and loads of goals.

In only his second game for the Sockers, Donovan scored his first MASL goal just 12 seconds in, sending the crowd of 4,263 fans into a frenzy. They greeted the feat with loud cheers as Donovan clenched his fists in excitement. To signal their approval, his teammates cleared the bench to celebrate.

“I’ve never scored that quickly,” Donovan said of his first MASL goal. “We wanted to be aggressive. This team can be aggressive and go after teams and put them under pressure.”

Donovan, a six-time MLS Cup champion who’s also tied with Clint Dempsey for most National Team goals at 57, emerged from retirement last month for a third time after a return to the Los Angeles Galaxy in 2016 and a stint with Mexican club Leon last year. He currently finds himself in the unusual position of having to play a version of the game he has no pro experience with, but one he admitted to having enjoyed watching. It was a good night for Donovan against the Express, where he scored twice and added two assists in a 13-2 rout.

“It’s easy to settle in with these guys. They’ve been so welcoming and accepting,” Donovan said of his new teammates. “I want to be able to contribute more on the field and I felt like I did that a little better tonight. The more options we have, the more pressure we put on teams.”

Before the game, dozens of fans avoided the windy 60-degree evening that swept across the arena’s parking lot dotted with towering palm trees by eating at a nearby Chick-fil-A. Some supporters donned the team’s replica vintage blue jersey for sale inside in honor of the team’s 40th season. Others had dusted off their National Team jerseys from the 2010 World Cup with Donovan’s name featured on the back.

The Sockers remain a long-standing San Diego tradition that’s deeply ingrained in the city’s sports culture. Donovan, wearing #9, is the latest superstar to play for them. His appearance has allowed a new generation of fans to appreciate what older fans recall was a string of successes in the ‘80s. That new generation includes the area’s Mexican and Mexican/American population who see the 6-on-6 game as reminiscent of futbol rapido – fast soccer – played south of the border.

“This season has been fun so far,” said Victor Castillo, 19. “I play lots of soccer with my cousins and friends in my backyard. The small space of indoor soccer, the passing and speed of the ball reminds me of that.”

Castillo, whose parents are from nearby Tijuana, said the irony isn’t lost on him that his family now root for Donovan. Not lost on anyone here is the team’s ethnic makeup. On the current 20-man roster, seven players are Mexican by birth.

“My family, and my parents in particular, spent years cheering for Mexico against Donovan and the United States,” he said. “Now that he plays for the Sockers, my father cheers for him. It’s nice to see and to be able to come to games with him.”

A San Diego resident and Spanish speaker, Donovan has been trying to get the city an MLS team. He was part of an investor group that tried to win the MLS expansion sweepstakes – one in which many medium-sized markets have been vying for in recent years. The bid took a hit last year. In a ballot initiative, voters opted to fund a competing stadium project led by San Diego State University. In the end, Donovan’s decision to sign with the Sockers continues “his mission to make San Diego a top soccer city,” said team owner/head coach Phil Salvagio.

Going for another championship

The team’s 14 indoor titles, dating back to the NASL, hang on banners from the arena’s rafters. Donovan, who has played and found success at the highest levels, remains thirsty for a championship. The Sockers clinched the Pacific Division by virtue of its win against the Express. The team’s 15-1 record, the best in the league, and impressive roster depth puts them in wonderful playoff position and favorites to capture the Ron Newman Cup.

Mexican-born captain Brandon Escoto leads the team with 22 goals and 15 assists. Escoto, who assisted on Donovan’s first goal with a silky left-footed pass, had two goals on the night. Donovan praised Escoto and his other teammates after the game, saying he’s still trying to figure out his role.

Donovan has won championships across his home state of California since the early 2000s. Donovan, who turned 37 on Monday, appears unable to stop playing the game he’s loved ever since attending the Argentina-Romania game at the Rose Bowl during the 1994 World Cup.

Donovan part of a larger trend

While soccer has become popular in this country since that summer – and thanks largely to the power of MLS over the past 20 years – the indoor game has largely struggled to gain attention. Relegated to small markets, the 17-team MASL features some of the most-storied indoor franchises like the Baltimore Blast, Dallas Sidekicks, Tacoma Stars, and the Milwaukee Wave.

For Donovan, it’s a chance to continue playing. While the relationship between the traditional game and the Americanized indoor version has always been a strained one, there are other MLS players who have opted to extend their careers by signing with MASL teams. Dwayne DeRosario and defender Adrian Cann signed with the Mississauga MetroStars this season. At age 40, DeRo came out of retirement to play with the MASL’s lone Canadian franchise.

“Quality signings like Landon and Dwayne DeRosario bring an entirely new level of professionalism and recognition to this league and to arena soccer as a whole,” said MASL Commissioner Joshua Schaub. “It’s an exciting time for the MASL and we’re lucky to have him.”

Despite his age, Donovan remains an effective player on the field. He can still breeze past players and his passes are mostly spot on. He isn’t as aggressive in the corners and when other players come up behind him in an attempt to grab the ball. Despite his years of outdoor success, Donovan said he is still trying to adapt to the rigors of the indoor game.

“There’s an adjustment and we’re trying to figure it out and get there slowly,” Donovan said. “There were a couple of plays … where I was disappointed with myself because I’m still not quite there.”