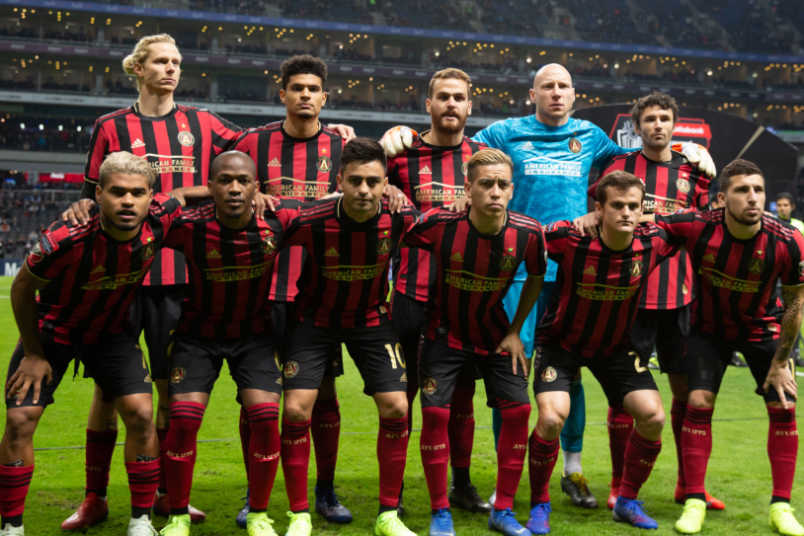 By Jason Davis – WASHINGTON, DC (Mar 8, 2019) US Soccer Players – Major League Soccer’s list of annual failures in the Concacaf Champions League looks almost certain to get another entry in 2019 after the second-legs of the quarterfinal round next week. That’s because every MLS team still remaining in the competition lost the quarterfinal first-leg. With one exception, the chances of turning around the scoreline are small.

More on that lone chance for redemption in a moment. First, let’s review the disappointment laid down by the New York Red Bulls and Atlanta United over two days.

That’s the defending Supporters’ Shield winner and MLS Cup champion, respectively. On paper, the Red Bulls and United are the two best teams in MLS. Both should represent the best chance for the league to finally break Mexico’s lock on the confederation championship.

That the Red Bulls couldn’t hold serve at home against Santos Laguna is particularly devastating. With the advantage of playing at Red Bulls Arena in the first-leg and having the chance to put down a marker ahead of the return leg in Mexico, New York fell 2-0 to a relatively goal-shy Santos team.

Through nine games in the Mexican Clausura, Santos has 11 goals. Los Guerreros have scored multiple goals in only two matches, with one league match accounting for four of the club’s total Clausura output. Though Santos throttled Marathon of Honduras 11-2 over two matches in the Champions League Round of 16, the expectation was that the Red Bulls would provide a stiffer challenge.

In fairness to the Shield holders, they did out-shoot Santos and out-play the Mexican side for much of the game. It was a lack of finishing that let them down at the worst possible time.

Now New York has to try and turn around the deficit, needing a 2-0 result at least just to push the series to extra time. To say that task is difficult would be an understatement. Only Sporting this season versus Toluca and Toronto FC in 2018 versus Tigres and Club America won a second-leg played in Mexico. New York should be well-rested for the trip to Torreon. Chris Armas’s team will sit idle during the second weekend of the MLS season.

Atlanta faced an even more daunting challenge than did the Red Bulls. The 2018 MLS Cup champions drew Monterrey in the quarterfinal round, with the first leg at BBVA Bancomer Stadium in Monterrey. Unlike Santos Laguna, there are no questions about the Rayados’ quality throughout the formation. The club is first in the Clausura standings and has yet to lose a game through nine rounds.

United falling to Monterrey in Mexico is not much of a surprise. It’s the nature of the loss effectively ended the champs’ Champions League campaign. With a one- or two-goal loss, Atlanta could hold out hope of scoring a similar victory at home. That’s what happened against Herediano in the last round. Monterrey’s 3-0 advantage is difficult not just because Atlanta needs three goals, but because it will be difficult to keep the Rayados’ potent attack off the board.

Frank de Boer must also juggle the lineup with the first home MLS match of the year coming Sunday against Cincinnati. That game will be a celebration of Atlanta’s 2018 MLS Cup victory. Maybe the best hope for a stunning series-saving win on Wednesday is that the good feelings of Sunday carryover.

De Boer deserve at least a few more games before the knives come out, but the returns on four games so far aren’t encouraging. Atlanta has one win in those four matches, and de Boer is facing direct criticism for his game management in Monterrey. United is learning how to play a new system and new signing Pity Martinez is still finding his feet.

New York and Atlanta look dead in the water in the Champions League. There might even be a temptation to play something other than a first choice eleven considering schedule congestion.

Sporting Kansas City at least has a real chance to turn things around against Independiente of Panama. The club that shocked Toronto FC in the Round of 16 took a 2-1 aggregate lead against Peter Vermes’s team in the first-leg of the series in Panama. It’s a poor, but not debilitating, result for the MLS side.

Vermes might have complicated the challenge himself. While Chris Armas and Frank de Boer both chose to rest players in the first match of the MLS season, Vermes picked his first choice side to play LAFC in Los Angeles on Sunday night. That team was essentially unchanged from the group that had beaten Toluca at altitude the Thursday prior.

Sporting prides itself on a “Sporting fit” ideal that pushes players to be ultra-prepared for the physical rigors of a busy schedule. The quick turnaround proved to be too much for some of those same players in Panama. Several players looked obviously fatigued and that tiredness played a role in Sporting shipping two goals.

Back at home in Kansas, Sporting will be favorites to flip over the scoreline, perhaps by leaning on the one away goal they managed to score in Panama. SKC is the only real hope of MLS putting any team into the final four. If Sporting does progress past Independiente, it’s an interesting scenario. Barring a miracle turnaround from the Dynamo, they’ll be staring at a mountain to climb in the form of Tigres in the semifinal.

Sporting will start its home schedule with a match against Philadelphia on Sunday. So there will be no break to get rested before trying to overcome the deficit against Independiente. Vermes’s lineup choices will be under scrutiny. No coach wants to start the season off with a pair of losses or give away a game at home. However, the nature of the MLS regular season means SKC’s boss might get away with rotating more heavily against the Union.

Houston got a passing mention only because they weren’t expected to be much of a challenge for Tigres. The Liga MX side’s 2-0 advantage after the first leg in Houston isn’t surprising. There wasn’t much pressure on Wilmer Cabrera’s team to represent for MLS.

The overall performance in this round and the poor opening legs for New York and Atlanta specifically have again raised the question of whether MLS will ever break Mexican control of the Champions League. The fact remains that Mexico’s best is better than the best MLS has to offer. Winning in the earliest part of the season isn’t just a matter of quality for the American and Canadian teams.

Whatever “progress” was in evidence with two MLS teams in the semifinals last year isn’t simply wiped out by a bad showing in 2019. Neither, though, was 2018 the huge step forward some wanted it to be when Toronto handled Tigres and America and the Red Bulls knocked off Club Tijuana.

Full parity isn’t going to come easily or without fits and starts. MLS might not even win a title in the region anytime soon, depending on the circumstances of which teams—on both sides of the border—qualify. It happened again because there are so many more reasons for it to keep happening than for it to not.