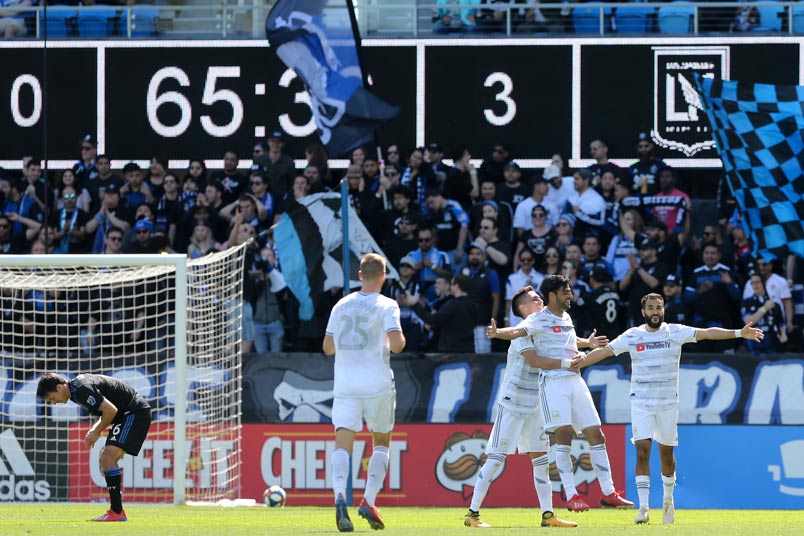 Week 5 of the 2019 MLS season had plenty of goals and plenty of questions about weather and defenses. The roundup starts with the goals. Toronto FC set the trend on Friday night with a 4-0 shutout of NYCFC at BMO Field. Jozy Altidore opened the scoring in the 29th minute. Alejandro Pozuelo converted a penalty in the 58th and scored again in the 78th. Jay Chapman finished off the goals in the 83rd. Alex Bono made three saves to keep the clean sheet.

On Saturday, Sporting KC beat Montreal 7-1 at home. Johnny Russell scored for Sporting in the 10th minute with Krisztian Nemeth doubling the lead in the 43rd. Felipe Gutierrez made it 3-0 in first-half stoppage time. Russell scored again in the 50th with Nemeth getting his second goal in the 68th. Gianluca Busio made it 6-0 in the 78th. Nemeth finished off his hat-trick in the 84th. Saphir Taider scored Montreal’s goal in the 89th.

LAFC shutout San Jose 5-0 at Avaya Stadium. Carlos Vela scored in the 8th minute with Steven Beitashour making it 2-0 in the 26th. Vela added goals in first-half stoppage time and the 66th minute. Vela assisted on Diego Rossi’s goal in the 68th. Tyler Miller made two saves for the clean sheet.

Houston beat Colorado 4-1 on the road. Memo Rodriguez started the Dynamo goals in the 4th with the Rapids giving up own-goals in the 15th and 34th minutes. Alberth Elis made it 4-0 in the 67th. Kei Kamara converted a penalty for Colorado in the 81st, going a man down with a red card to Tommy Smith in the 89th for violent conduct.

“It’s one thing to get the wins at home, but the past couple years playing on the road has been a struggle for us,” Houston goalkeeper Joe Willis said. “Early on in the season it’s huge for our confidence to get this win. The way we did it to score four goals, it’s big for us going forward.”

FC Dallas beat Real Salt Lake 4-2 on the road. Dallas took the lead in the opening minute with a goal from Carlos Gruezo. After going a man down with a red card to Damir Kreilach for violent conduct, Jefferson Savarino equalized for RSL in the 31st. Paxton Pomykal scored for Dallas in the 32nd and 64th. Marcelo Silva pulled a goal back for Salt Lake in the 66th with Jesus Ferreira scoring for Dallas in the 69th.

Chicago shutout the Red Bulls 1-0 at home on a 48th minute own-goal. David Ousted kept the clean sheet with one save.

New England beat Minnesota 2-1 at Gillette Stadium. Jalil Anibaba scored for the Revs in the 10th with Darwin Quintero equalizing from the penalty spot in the 26th. Brandon Bye scored New England’s winner in the 62nd.

Philadelphia beat Cincinnati 2-0 away in a game marred by rain. Marco Fabian scored in the 47th with David Accam doubling the lead in the 58th. Andre Blake made one save to keep the clean sheet.

Same state, same problem with the weather causing issues in the Crew’s 2-0 home win over Atlanta United. Pedro Sanchez scored in the 2nd with Gyasi Zardes doubling the lead in the 39th.

“Listen there’s no doubt about it, we weren’t the better team,” Atlanta goalkeeper Brad Guzan said. “But the conditions in the second-half, it was a disgrace to be out there.”

Vancouver and Seattle finished 0-0 at BC Place. Both teams had three shots on goal.

DC beat Orlando City 2-1 on the road. Steve Birnbaum scored in the 6th and Wayne Rooney made it 2-0 United in the 30th. Dom Dwyer pulled a goal back in the 63rd.

Week 5 ended in Carson with the Galaxy beating Portland 2-1. Zlatan Ibrahimovic put LA up from the penalty spot in the 33rd minute. Jeromy Ebobisse equalized in the 44th. Iibrahimovic converted a second penalty in the 65th to seal the win.