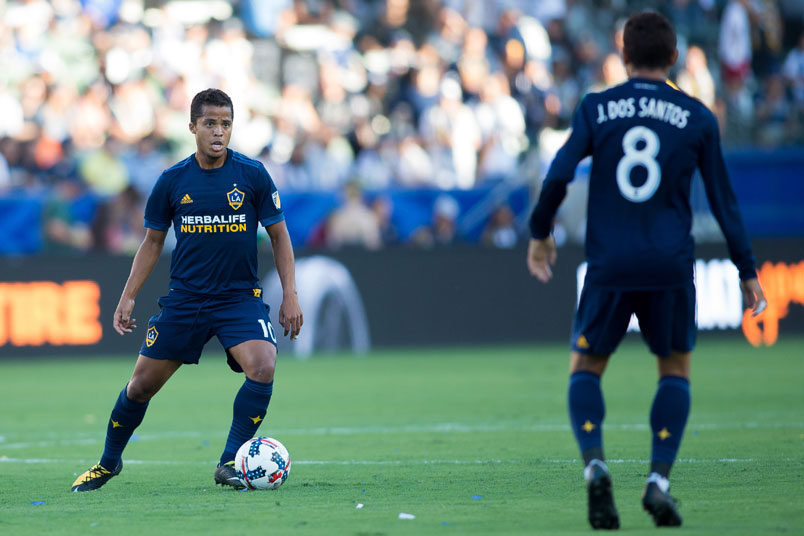 By Luis Bueno – RIVERSIDE, CA (Mar 6, 2019) US Soccer Players – When the LA Galaxy pulled the trigger on a major transfer in the summer of 2015, it looked like a bit of game-changer. In August 2015, the Galaxy acquired Giovani Dos Santos from Villarreal. It took a hefty transfer fee, but LA looked to have landed the eventual heir to Robbie Keane’s attacking throne.

With that move, the Galaxy did something unique in MLS. They signed an in-his-prime Mexican international who had spent his entire career in Europe. The move made sense on so many levels, it seemed like a bit of a coup. Four years later however and that trigger pull set off mostly blanks.

The Galaxy parted ways with Dos Santos on the eve of the 2019 season. They ended the 29-year-old’s Galaxy career far more prematurely than it would have appeared four summers ago. The Galaxy bought out Dos Santos’ contract for $6.5 million, the amount of money he was set to earn this season.

It’s a move that made two things clear. The Galaxy really believed it was time to move on from Dos Santos to answer their designated player problem. They perhaps inadvertely revealed just how deep their pockets are.

LA had little choice but to move on. They’re in another rebuilt under a new technical director. Once again, they’ve had to reconfigure the coaching staff. They’re also heavily invested in Zlatan Ibrahimovic. There’s a clock on just how long the 37 year-old has left in topflight soccer.

It’s easy to dismiss the Gio Dos Santos era in LA. Injuries and international duty limited his contributions. Last season, he appeared in 14 games scoring three goals. In 2017, when the Galaxy struggled on its way to a last-place finish, he scored six times in 25 games.

Things began better. Dos Santos scored three goals in the 11 games he played in during the 2015 season and scored 15 the following year. When he joined the club, he was 26 and heading into what should have been his most productive years. That is why the club paid Villarreal around $7 million in the first place.

Now, the Galaxy is paying almost that much to come into compliance with MLS rules. The club put itself in this position. They went all in on Zlatan, giving him a designated player contract when they already had the league maximum of three. They also are paying him the highest single-year salary in MLS history. Along with Dos Santos, brother Jonathan Dos Santos and Frenchman Romain Alessandrini, the Galaxy suddenly had four DPs on the roster, which was fine until March 1.

The Galaxy tried to make that work. It didn’t, leading to the unlikely scenario of buying out Gio Dos Santos’s contract. In reality that was the only move that made sense.

Ibrahimovic was a sensation in his first season with the Galaxy. He played on a discount at $1.5m. A second season of Zlatan required fair compensation for a global superstar.

Now, the Galaxy have Zlatan, Alessandrini, and Jonathan Dos Santos. Jonathan may not be as high profile as Gio, but he has shown he can be a linchpin for any MLS team’s midfield. Alessandrini meanwhile has been nothing but productive since joining the club ahead of the 2017 season. He scored 13 goals in his debut season and followed it up with 11 goals last year.

Nothing like that was on the table this time. Instead, the Galaxy had to make the necessary adjustments and comply with the roster rules. Moving Gio out doesn’t create a spot they can now fill. What it should do is make the Galaxy fully consider their choices.

Playing in Los Angeles means the Galaxy must take these kinds of risks. The Galaxy has set itself up for making exactly these kinds of transfers. The club has mostly seen its DPs pay off, such as Keane and Alessandrini. Steven Gerrard was perhaps the lone exception although his popularity beyond the field forced the Galaxy’s hand.

Those kinds of off-the-field factors, the kind that led Gerrard and Dos Santos to the Galaxy, will always force the Galaxy to look at and bring in similar types of players in the future. At least now the club knows there is a way to solve a designated player problem.