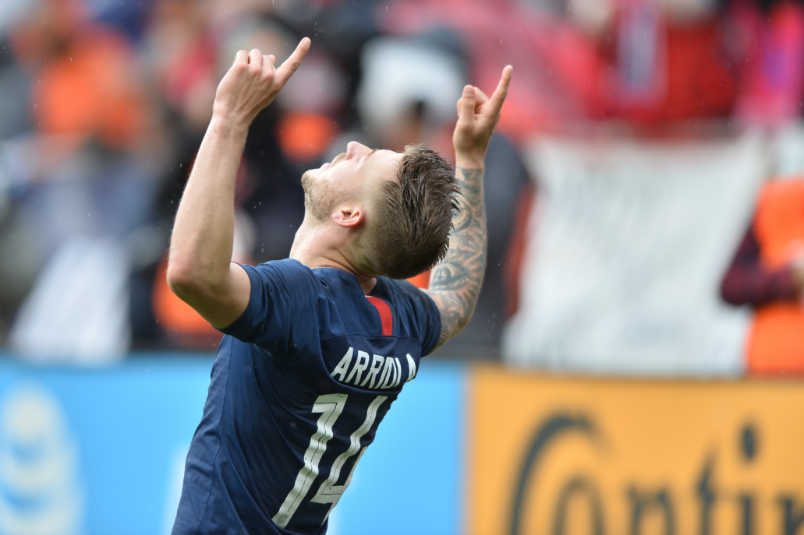 By Jason Davis – WASHINGTON, DC (Mar 13, 2019) US Soccer Players – USMNT coach Gregg Berhalter picked 24 players for a pair of March friendlies on Tuesday. Included in the group are names returning after significant absences from the national team picture like Omar Gonzalez and Tim Ream. Berhalter also called in the young Bundesliga midfielders Christian Pulisic, Weston McKennie, and Tyler Adams. This camp is the first time Berhalter had available the full depth of the player pool, minus a few injured players.

With that in mind, it’s notable that the group of forwards tabbed by Berhalter are all MLS-based. Here’s a look at those six players.

Wayne Rooney and Luciano Acosta get more of the headlines and spotlight in Washington for an ascending DC United. Still, Arriola’s contributions to the Black & Red are equally important to the club’s success.

Arriola is versatile, with an engine that makes him effective as both an attacker and a defender. When deployed wide, he’s more likely to cut inside and attempt to combine with teammates than to stay on the sideline and stretch the defense. That figures to be his role with the USMNT under Berhalter, especially after a January camp that saw the California native scored the second goal in a 2-0 US win over Costa Rica.

Arriola scored the winner for DC United in the season opener against Atlanta. That form combined with his ability to play in a number of positions makes his inclusion in the USMNT roster no surprise.

The reigning MLS Rookie of the Year gets a shot in March friendlies that will represent a significant step up in intensity and quality. Baird’s pro soccer career got off to an excellent start after four years at Stanford with an eight goal, five assist campaign for Real Salt Lake in 2018.

Baird started the right side of a forward three in both of the Americans’ friendlies following the extended January camp. He setup Djordje Mihailovic for the eventual game-winning goal against Panama.

“Baird was a guy who really impressed us [in January camp],” Berhalter said on Tuesday. “Now we want to see how he does against better competition.”

That statement suggests playing time for Baird against Ecuador and/or Chile. The experimental nature of this camp means we don’t yet know how big Baird’s role will be.

Among the forward group called in for the upcoming friendlies, it’s Lewis who is in the most tenuous position with his club team. Every other player among the six front line call-ups is a starter in MLS. Lewis, on the other hand, it a part-time contributor at NYCFC.

That remains the situation even after Lewis impressed with the national team in the games against Panama and Costa Rica. Used as an impact substitute, Lewis made an immediate difference for the attack and assisted on a goal in each of the matches. His speed and ability to create in 1v1 situations makes him unique among the forward pool.

The two caps and two assists from the USMNT experience didn’t entirely convince Dome Torrent that Lewis deserved a bump in playing time in MLS. The former Akron Zip started the league opener against Orlando City and assisted on a goal. He was a second-half sub against DC United last weekend.

Completing his comeback from an early 2018 injury, Morris returns to the USMNT picture in March. He’s had a strong start to the MLS season with the Sounders.

In his first game back in the starting lineup since a Champions League game in February of last year, Morris hit for two goals against FC Cincinnati. He showed off the speed and power that made him an intriguing national team prospect while still at Stanford. At his best, Morris is a game-stretching wide forward who fits Berhalter’s system because of his ability to beat defenders and get in behind.

Morris is one of the more experienced players in the forward group for this camp, coming in behind only Gyasi Zardes in total caps. Morris is also second among this group of forwards behind Zardes with five goals for the national team.

Ramirez returns to the national team fold after a January camp that delivered his first cap and first goal. It was the LAFC forward who was on the receiving end of Jonathan Lewis work for the third and final goal against Panama on January 27. Ramirez played just a handful of minutes in that match but made his time count.

He earned a slightly longer period against Costa Rica a few days later, coming on for Zardes in the 78th minute. Berhalter clearly sees Ramirez as a potential contributor for the team at the center forward spot.

Ramirez has started the league campaign well, scoring one of LAFC’s four goals against Portland on Sunday. It’s Ramirez that is the starter for Bob Bradley in LA, though he has given way to Adama Diomande in both MLS matches near the hour mark.

Strong with the ball at his feet, Ramirez is adept at pulling teammates into the play. Good in the air and capable of a finish, Ramirez is taking another step from second division star to a quality contributor to a top MLS attack.

Berhalter helped revive Zardes’s goal scoring fortunes when the coach acquired the Galaxy striker via trade ahead of the 2018 season. Playing in Berhalter’s system, Zardes scored a career-high 19 goals last season, benefiting from the wide play Columbus used to get in behind of defenses to set up simple chances from good forward runs.

It’s those runs and the goals they create that have Zardes in this team for two games. Berhalter spoke of fostering “continuity” because of the short camp, a fact that also argues in favor of Zardes’s inclusion.

Zardes started both games against Panama and Costa Rica. Though he didn’t score, his work was good enough to convince Berhalter that he has a place in the group moving forward. Berhalter knows what Zardes can do. While the new head coach may not use exactly the same approach he used in Columbus, it should be close enough to make Zardes a good fit.

The start to the new MLS season has been good for Zardes under new coach Caleb Porter. The plan that made Zardes a top scorer remains in place. Zardes scored twice in the Crew’s win over New England on Saturday.