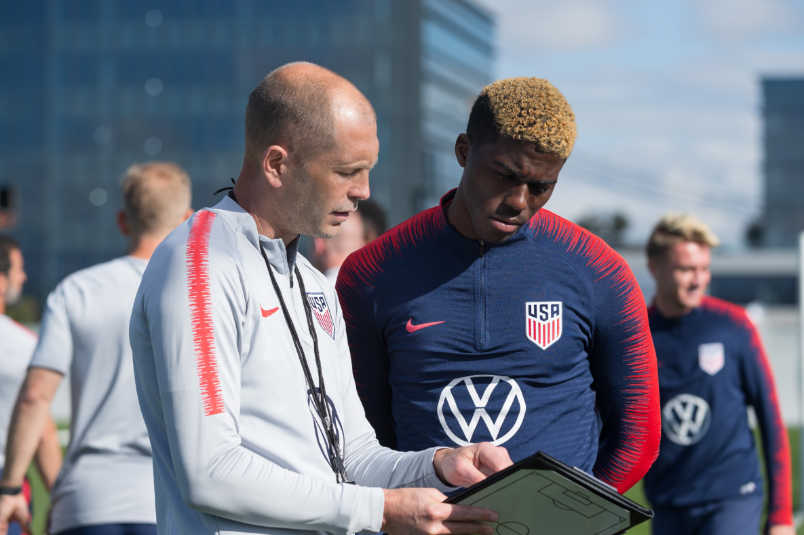 By Charles Boehm – WASHINGTON, DC (Mar 14, 2019) US Soccer Players – Iconic UCLA basketball coach John Wooden used to tell his teams “be quick, but don’t hurry.” That mindset also seems to reflect Gregg Berhalter’s approach to his construction process with the USMNT. The players will gather in Orlando next week for a training camp ahead of friendlies vs Ecuador and Chile.

This is the first FIFA international window of the new coach’s tenure, providing him with full access to his player pool both at home and abroad. Traditionally this March window marks the return of the Yanks abroad to the squad after the MLS-centric January camps, with European- and Mexican-based regulars often making up the majority of the roster. Berhalter did things a little differently this time around, though.

Only nine of the 24 players he called in earlier this week play outside of MLS. Last October, caretaker coach Dave Sarachan’s called in 14.

This seems to be due in large part to January campers like Nick Lima, Daniel Lovitz, and Gyasi Zardes remaining in the fold. It’s an interesting shift from the norm. Berhalter and his staff are placing a high priority on the groundwork laid in their first gathering rather than calling in as many members of the foreign legion as possible.

“We thought it was important to tie some of the themes of last camp into this next camp, and to have some consistency in the personnel made a lot of sense,” said the coach in remarks distributed by US Soccer. “We still think that we’re able to evaluate a new group of players.”

On the one hand, this exposes Berhalter, a former MLS coach, to accusations of favoritism towards the domestic league. From a more thoughtful vantage point, it looks like he may have taken some lessons from his two predecessors.

Jurgen Klinsmann was fond of looking for overlooked talent in unconventional places. Whether it was calling Miguel Ibarra up from the second-tier NASL or plucking Jordan Morris out of NCAA soccer ahead of schedule, he took risks with his roster. The drawback to his roving eye was that he often struggled to maintain consistency in ideas, personnel, and performance from camp to camp. Bruce Arena, on the other hand, made no secret of his faith in MLS players, particularly veterans, and in 2017 turned away from segments of the overseas pool, to his eventual detriment.

Successful USMNT groups of the past found a balance between domestic and overseas, experience and freshness, stability and competition. Berhalter saw this in his own US playing career. He’s surely absorbed further wisdom from his time with the Columbus Crew. Over five years, he carefully cultivated a core of players who, while hailing from diverse backgrounds, all matched and embraced his way of playing.

It’s one of the challenges unique to national teams. Are rosters constructed effectively as a country’s all-star team, a collection of the best overall talent available at any given moment? Or a consistent group with well-honed roles and collective understanding that’s not thrown away or reshuffled by injuries or losses of form?

Berhalter seems comfortable living in the here and now, without losing sight of the path that lies ahead. Keeping faith in MLSers who’ve already logged significant time learning within his tactical and cultural structure suggests that players’ leagues, reputations, or track records of past service do not beat what he and his staff observe firsthand in camp.

Building a stable baseline can actually make it easier for new arrivals. It offers a foundation that can empower them to perform at a high level in individual terms. That also fueled the coach’s decision to shift youngsters Josh Sargent and Tim Weah to the US Under-23 team as it begins the run-up to Olympic qualifying with a camp alongside Tab Ramos’ U-20s in Spain this month. Those age-eligible groups also provide a means to stay engaged with younger players on the fringes of the USMNT pool.

Maybe there’s also a subtle message of quality over quantity here – tayers should aim not merely to earn time in USMNT camps, but to log positive, useful time that can become one of many building blocks towards a coherent collective. Like a science experiment, limiting turnover from one roster to another could also provide a control for adjustment

Berhalter clearly valued the unique opportunity afforded by the length and immersive nature of January camp. He drilled his philosophies into his players effectively enough for them to showcase some fairly advanced tactical concepts in friendly wins over Panama and Costa Rica. With rare talents like Tyler Adams, John Brooke, Weston McKennie, and Christian Pulisic now bringing an injection of quality to that core group, this month’s games promise to add further shape and identity to the program’s new era.